Don’t you hate it when you head somewhere and then years later realise, you have no idea where you were? Now with my diaries from this trip gone, I can only guess at the name of the town I stayed at when I was in the county of Devon, in the south of England. It’s a really beautiful area, and I ended up there thanks to an invite from the friends I made when visiting Agra, India, and then met up with at the Glastonbury Festival. I can say that I THINK this small town was in the north part of Devon. If anyone recognises it from the pictures I have, please let me know!

I remember the two girls’ names at least (and that took a lot of getting my brain into gear to achieve lol!), Eleanor and Kate. I looked through my old email but couldn’t find anything from them, yahoo seems to only let me go back to 2005 which is a bit… well I don’t know what but it is.

I stayed at Eleanor’s house in a charming small town in Devon that didn’t have a train station. Somehow I found my way there after taking bus and ferry from Dublin back to the UK, and I had a great week. There was a fair bit of relaxing to do, but I also remember that there was a church there in ruins which was well worth exploring. A fair bit of walking about to be done, and I had a fair bit of free time on my hands as Eleanor was at work for the first few days. 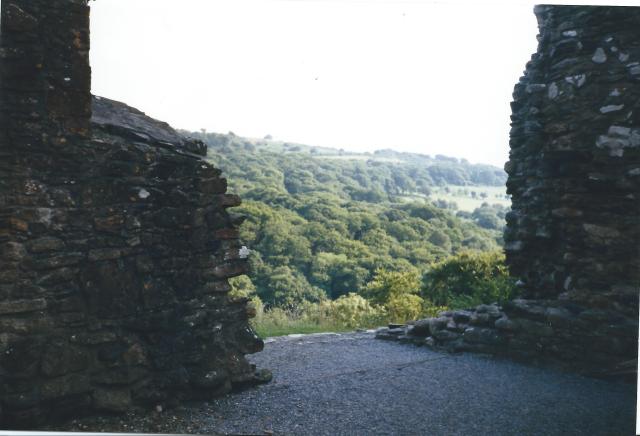 Then I joined Eleanor, Kate and group of their friends and we stayed one or two nights in a tent on the beach. This way I was to make up some of the budget I had lost in London going out to shows every day. The weather was mid-20s I think, it wasn’t too cold. It was July though!

Well, I was in my mid-twenties, and the others were around that age or a little younger I think. The beach there was not what an Australian considers a great beach. It was a little rocky, but everyone enjoyed having a swim in the warm water. No wait, everyone bar ME. Because to me, this was not warm water. I thought it was FREEZING! Ah well, you can take the boy out of Australia, but…

Anyhoo, the trip continued with a lot journey by bus I think to a new country – Scotland! I had a few days left before flying out of the UK, and I wanted to see Edinburgh. Well, I remember possibly less about Edinburgh but at least I remember the name of the place.

Look, it really is charming. My only criticism of Edinburgh is that, well, for July it was a tad cold. Every day. And there was rain. Every day. I don’t think the mercury rose beyond 12 degrees Celcius, and ironically, it would turn out to be warmer in Iceland! (spoiler alert, my next destination!)

However, I did love the cobblestone streets, and the castle was great (and I think it was free), and the hostel was very friendly. It was 1999, and the UK was still in the grip of the release of the first Star Wars films for like 16 years. Yes, this is when ‘The Phantom Menace’ was out. The hostel in Edinburgh was celebrating with a Star Wars marathon, and I decided that I had to see ‘The Phantom Menace’, and right away.

There was a cinema along the main street opposite the hill with the castle on top. I remember it a very touristy street with lots of souvenir shops, but not much else apart from the icy wind and the fact that I suddenly needed all my winter clothes again! I sat down with a group from the hostel and we watched in awe. The moment of the opening credits was amazing, and the second the penny dropped who Palpatine was, well, a person never forgets that sort of feeling. I LOVED it.

That said, it didn’t take long before my assessment of the film completely changed, but that’s just the predictable reaction I guess when you see such a significant film. Then what? I think I went on a low-key pub crawl. I seriously don’t remember much and I might have only been there two nights, three at the maximum, before I was taking a train to London (SO much quicker than the bus) in order to catch my flight which was in the early afternoon.

That was the UK and Ireland for me, and now I was headed north to Scandinavia. My first stop (proper) would be Iceland. Part of me didn’t believe it was a real place. It would sure turn out to be one of the most interesting of the entire adventure!

3 thoughts on “Trip of a Life Time – Devon and Edinburgh”