I’ve been very keen to get the latest ‘Short Journeys’ up on Amazon for kindle, and finally it has arrived! ‘Short Journeys: India’ is a collection of tips, information and some experiences too – stories and so forth, from my three trips to India. It covers Delhi (the good, the bad and the ugly), a bit of Rajasthan – Jaipur, Udaipur and Pushkar, it covers Punjab – Chandigarh, Jalandhar (great story) and Amritsar with the amazing Golden Temple, and then it covers Agra, Varanasi, Kolkata, Darjeeling, Mumbai and Goa. It talks about the places I stayed and how I got about. So if it interests you, it’s just $1.39 at the US Store, 85p at the UK store and 99 Euro cents at the European stores! 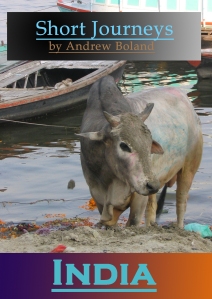 The overall product page is here.

From the book, here’s an experience I had in Jaipur where things got a little hairy for a while :

Jaipur was a bit of an awakening for me I guess as a backpacker. It all boils down to one strange day that could have ended pretty badly for me but fortunately didn’t. At the Ever Green there was a notice plastered on a wall in the restaurant advising people that if someone should approach them asking them to buy gems and sell them overseas for a small profit they should decline. I thought it was an interesting note as I scoffed down my breakfast, but my main thought was basically ‘I wonder what that’s about’.

Turned out I would soon discover. I had seen a bit of the town on my first day in Jaipur, and on my second I had a few things to do – principally to get an overnight train ticket to my next destination, which was Udaipur, and to send a parcel home.

Getting the train ticket was easy enough, although it was my first real experience of standing in a queue to buy something in India. I stood back from the person in front of me, relieved that there was only one person in the line between the ticket window and myself, and from nowhere as I stepped forward after they were done, a guy basically ran in and pushed in when I was within half a step on the window!

I kid ye not – this does happen in India. Regularly. You’ll have to decide how you want to deal with it but when there are many people in a line it is just a huge group of people jostling like a crowd. It’s not just India, but the sub-continent is where it happens most and with the biggest numbers (although places in China are pretty bad too). It’s a cultural thing really, perhaps a strange defence of the behaviour, but with so many people it becomes a case of ‘if I don’t push in, everyone else will and I will never get my ticket’. And that’s the long and short of it. Play the game or don’t, it’s up to you. Just be aware that getting angry and self-righteous never EVER won a fight in India.

So to be honest at this point I was just ‘Ummm excuse me, but I was here first and you appear to, probably by accident not realising someone was here and all, just jumped in front and….’ or something to that effect. Or lack of. Yes, pretty poor form but I was still the small fish in the big pond that is India and today I would have pushed and glared. When I have stood up for myself, I seem to have been able to out stare them and win the day.

Once I had my ticket in the sleeper I headed to the nearby post office to ready my parcel and send it home to Australia. Well, it was another chaotic scene in the post office with crowds of people clamouring to get to the counter and I probably wasn’t feeling all too keen to dive in. When I got the customs form I had to take it away and write the details and then I would have to fight my way back to the front to actually have the thing posted.

So I took the parcel away to a bench where I started to fill out all the information. It wasn’t huge but was a little bulky. A guy came up to me and offered to help, and I didn’t have the smarts at this stage to say ‘I’m right thanks’. He helped me get a really professional job done on the parcel, he took me to a counter where the parcel was sewn into a hessian bag, and then was sealed with wax. The customs form had to go to one window to be approved and then to another to post. He managed to get it done very quickly as if my parcel was top priority.

I was very thankful to be honest and in the end the parcel made it to Australia with no issues. He then invited me to his house for a something to eat and I agreed and hopped on a rickshaw. I was taken to a pretty nice house maybe fifteen minutes or so from the station. I sat down outside in a courtyard area and chatted away to my new friend and his pal about – well me mostly. They gave me a bottle of Coke and I drank.

Somehow the conversation turned to gems. They were mining gems. I had unwittingly told them the next destination for me after India would be Europe. They started saying that I could buy some gems from them at a very low price and then sell them when I got to Europe and make a lot of money. Uh-oh… THAT was what the sign at the hotel was going on about! So now I had to extricate myself from the situation as best I could.

They were quite insistent and turned a little aggressive. They were offering me an easy way to make money so what was wrong with me not wanting to take a swag of gems with me to Europe to sell? I just kept saying ‘no’ but was starting to worry they weren’t going to let me go to be honest! Eventually, after more than half an hour of insisting, they let me go without any gems. Although they asked me to pay for the Coke!

They signalled a rickshaw and it took me back to the station area. I had probably made up a story about meeting someone there which is why they let me go. I didn’t want to tell them which hotel I was staying in as they would know where to find me and I suspect would have turned up at some point to at the very least pester me. I got off the rickshaw and paid and my ‘friend’ got off too. I then went the longest way possible back to the Ever Green to make sure I wasn’t followed.

And so I began to learn about the difficulties travellers can face occasionally in India. You can trust SO many people India, really. I dropped my wallet at Delhi station and someone picked it up and ran after me to give it back. But there are those who will prey on travellers if you let them. You can sense it usually – they are too friendly, they make up unlikely stories, they ask you to take gems with you for a price. Odds are anyone out for some sort of scam will speak excellent English and be somewhat slimy and overtly polite in their approach. Use your instincts, you should be fine!