Hmmmm, at what point in this post will I mention just how much I dislike Delhi? DAMN already given the game away. But the fact is, Delhi and I have a hate-hate relationship. It hates me and I hate it. Although to be fair, I never did anything to Delhi. In return it has made me dreadfully sick both times I was there, scammed me and given me some pretty grim places to stay. Juxtapose (I am using this for EVERY city rumble!) with Mumbai which I really loved the one time I was there, and well, Delhi falls deeper into the abyss of bloody awful places I’ve visited to be one of the worst.

The thing is I was pretty much stuck going there the second time in 2004 because I was travelling from one side of India to the other. And well, there are a few nice sights there AND I found a nice hotel, very cheap not far from the train station in the Paraganj area. Sadly, the food there gave me food poisoning and I ended up in hospital for six days. Upside? Well, the hospital was pretty nice, cheap, I had a TV and nurses running around looking after me, and all for a hundred bucks. They didn’t even charge my travel insurance in the end.

And there’s an area Delhi can claim superiority over Mumbai – where accommodation is concerned, better bang for your buck. Good luck finding a decent hotel for $20 or less in Mumbai. I paid $36 ish in 2000 for a half decent room with old floorboards and air-conditioning. Thin walls too. This was after I was scammed big time from the airport and stuck in a taxi in the middle of the night paying 4-6 times the going rate for trip into town.

But from there my experience of Mumbai improved. To this day I have nothing but fond memories. Watching cricket played by locals. Playing cricket with the locals. Riding the double decker buses, walking the streets. Taking the local train, then an auto-rickshaw back to the airport for less than a dollar! (evened out a bit that way)

The buildings are glorious in Mumbai, if incredibly colonial. The Victoria Station Terminal is a prime example. The Taj Mahal hotel, main location of the terrorist siege a few years back now, with it’s beautiful Gate of India next to it, simply a stunning building inside and out. The leafy streets are great to walk around, and the eating is good. Very good. My favourite was this ‘sizzler’ they do in a few places. The street vendors sell all kinds of things, including gramophones – the horned variety. If only I could have got one back to Australia.

Delhi has a wonderful mosque and Qutab Minar, an ancient city to visit, it’s not short on attractions. And the train museum is awfully fun. However, things are very spread out and you need transport everywhere. Of course, they have a subway now but still the visitor finds themselves using a lot of auto-rickshaws, leading to the chance of being scammed. Which you know, not great. More on my scammed in India stories in a separate blog sometime soon! Okay the summary – Delhi not a great city for walking.

The weather in the two Indian colossuses is quite a contrast. Delhi is dry, and varies from cool and pleasant in the winter months in the low twenties and even less, to 40 to nearly 50 degrees by April/May. This is not so nice in a dusty city. Mumbai is humid. So more rain, affected more by the monsoon. I was there in January and it was around 30-34 degrees every day. It gets a little hotter, and maybe a little cooler, but not the variance of Delhi.

Mumbai has beaches. Delhi does not. But if you look at a picture of a Mumbai beach you may not think that’s a plus. In Delhi I was shocked by shanty towns – tents, canvass put up to house people. I believe they moved most of them along prior to the Commonwealth games a couple of years back, but this was my first hit in 1999 of extreme poverty. The night I arrived in India for the first time I was in Delhi, and I found myself having to step around dozens of people sleeping in the street. For a guy from Melbourne on his first solo trip overseas, that was more than a little confronting.

I made friends in Delhi and Mumbai, there’s no denying that, but it seemed a lot easier in Mumbai. After visiting Ghandi’s house (another point to Mumbai for that one!) I went to a little local restaurant for lunch and spent hours chatting with people about life, cricket, Australia and other things. With a big group of teenagers (I think, or around 20). I was much younger in 2001 as well you know!

In Delhi I met up with a friend of a friend who took me to some sort of American diner and then really didn’t talk to me. So, not quite the same thing.

Mumbai. It’s friendlier. The food was awesome and didn’t make me sick. It was easier and nicer to walk around. It didn’t get as ball-burstingly hot. There’s… a beach. Ghandi lived there. Mumbai kicks Delhi’s butt!

Next Episode… actually been having a hard time choosing for the next city rumble, but I’m heading south to Singapore who is taking on Kuala Lumpur. May the Journey Never End! 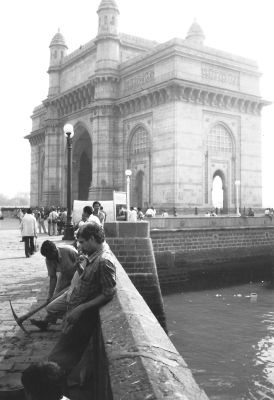 Leave a Reply to Travelling Ides of March Cancel reply