Every week I get to Sunday and I have to put up my ‘Sunday Spotlight’, and I gets to thinking, then thinking a little more and then, yes, a little more. No, it’s not that there are no cities left, but that there are so many interesting ones out there that it’s so hard to choose, hard to vary them and mix in the obvious with the places my readers may never have considered. So, on the theme of places you might not have considered, I’m going to head to the middle of nowhere, the Kazakh Steppe, to the capital of a country made famous by Borat, although his Kazakhstan bares little to no resemblance to the real Kazakhstan. 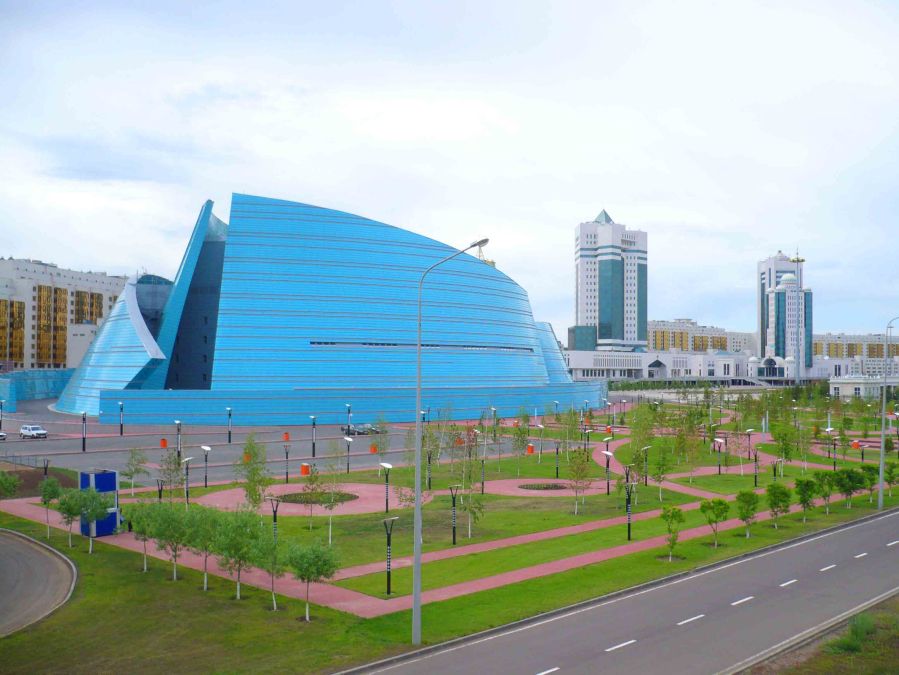 Astana is a city of the future. It’s one of those places that when you see the photos, you just won’t be able to quite comprehend that it’s real. You see, Astana (and yes, I have written about it before but it was long ago before I was getting any hits on the blog, and besides I’ve brushed up the photos so they look extra super for this one!

Astana is like Canberra, a city built pretty much from scratch to be the nation’s capital. Actually, there was already a small town there, the remnants of which you can see in parts of ‘Old Astana’. You’ll find around the world many countries have capitals built from scratch when a different capital (in this case Almaty) once existed. Reasons vary, but the reality is for Kazakhstan their somewhat egotistical President, Nazabaev wanted to build something in his own image.

To help him along he got several renowned architects to help with the design, the main one being Norman Foster. Norman Foster produced several buildings in Astana, none being more outrageous than the 67-metre Palace of Peace and Accord. Inside there’s a concert hall, a museum, an impressive atrium and a conference table right at the very top under a representation of the Kazakh flag.

The Byoterek is shaped like an ice cream cone, has an aquarium in the bottom and an amazing view of Astana at the top. Put your hands in the hand print of the President. It’s not too far from two giant gold coloured samovars, and then a little further along on the river front, one of the more impressive (size wise) Presidential Palaces you can see in this world.

You think Nazabaev is egotistical? Well, just in case you DIDN’T, he has a Presidential Museum dedicated to himself! If you are looking for the odd, the quirky, a city that is set out like a giant playground, then Astana might just be your bag. What else is there?

Well, the Khan Satyr is a giant tent-like structure that is basically a shopping mall. Will a roller coaster and a water-coaster ride at the top, around seven levels of shopping, restaurants and more. This one’s free to enter too, although entrance for any of the buildings around the place doesn’t put a hole in your wallet. The New Mosque is probably the best of all the buildings, because it has a wonderful peacefulness about it, situated on the walk from the Khan Shatyr to the Byoterek. That whole walk you are between some mind-boggling buildings!

How did Astana grow to be so… so… like that? Well, oil, gas and minerals. From the late 1990s through to today, a resources boom has fed the coffers and this is what the President decided to use the mula for!

Transport is not quite Astana’s forte yet. There are rumblings and plans for a metro, but it hasn’t come into fruition as yet. Buses are therefore the go, and there are plenty enough to get you from A to B, but taxis will work out more frequent and convenient. For the visitor, finding cheap digs is a problem. I paid around 40 bucks a night at Hotel Relax, which I challenge you to find online. It was newish and clean enough, but the location was nowhere near anything sadly.

Walking can be ok, I did a bit of it but it was getting warm in May, and it’s flat and outside Old Astana, there aren’t many trees. It’s also really spread out so you will be in for quite a bit of walking if you choose to go that way.

Food in Astana also is a little disappointing, it’s better in Almaty (which I WILL get around to doing a spotlight on in a few months’ time because I loved it) and even the much smaller Semey in the north. You need to search for decent food, the food court near the Byoterek will keep you going but the white sauces may also keep you running to the loo!

So. In summary. Let me tell you that Astana is not to be missed if you head to Kazakhstan. No sir, it’s unique in the world and certainly in Kazakhstan itself, there’s nothing else quite like it. You’ll need three days if you can spare them, the good news is that between Almaty and Astana there is the Talgo fast service, comfortable and overnight to save you on hotel bills. Astana, it’s well… Astana.