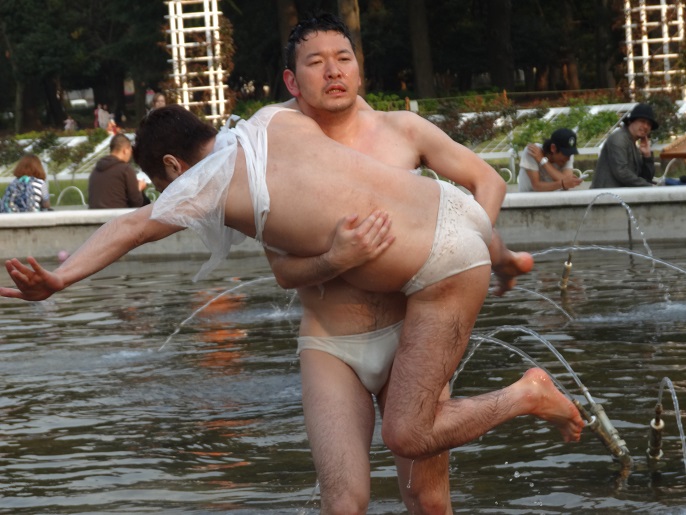 Today I had a great day. I did three main things – I caught up with two people who went through training with Interac when I first came to live in Japan. Ravi and Kamillah are from Jamaica and  great, friendly people and after two years, it was great to catch up. They have both spent the last two years close to Tokyo teaching English, whilst I was up in Iwate in ‘the sticks’ as we would call in it Australia. So they have had quite a different experience living and working in Japan to me. They are also going to feature on the podcast where I will be talking to them about life in Japan and their home of Jamaica too. The podcast should be starting very soon, before April 20th I have set my date to have it all sorted.

When I was previously in Tokyo, back in August 2012 I tried to find this special spot in Harajuku where the cosplayers came out to play. It would make a really good blog post with lots of photos, I thought. But I failed to find them. Today I tried again. I headed up to Harajuku from Shibuya and went down the famous Takeshita street. The man at the tourist information tram at Shibuya advised me this was the place to go.

Except, it wasn’t. I walked the length of the street, and the closest I saw to cosplayers were girls dressed up in outfits to try and attract people in to the shops. It’s certainly a colourful street I should add, where you can find some of the more daring of Harajuku fashion, but no cosplayers it seemed. The shops also employed a few people from Africa – Guinea-Conarky it turned out for the couple we spoke to, to entice the customers in. Spoke to a couple of guys from Guinea-Conarky about the cosplay and they told me it was in Yoyogi Park, mainly on the weekend, principally on Sunday.

Okay. Well we headed to Yoyogi Park, which was five minutes walk away, to see if we could find any there on a Tuesday. The park was busy, as today it was lovely and warm and sunny and despite being a Tuesday the perfect day to head out. But we saw no cosplayers sadly. However, as we were leaving we did see something perhaps almost as amazing – two men, possibly drunk, in the pond wrestling each other! They had colour-co-ordinated underwear, and some sort of cloth over their chests, so maybe it was intentional. I don’t know. It certainly was a very strange thing.

With a little time left in Japan, I am looking to find the odd and different. It certainly took away from the disappointment of not finding any cosplayers – I am not done with THAT mission either.

Thursday I will be continuing my Japan Survival Guide, I’m going to look at catching trains and transport.

3 thoughts on “Harajuku and Naked, Wet Sumo in the Park”