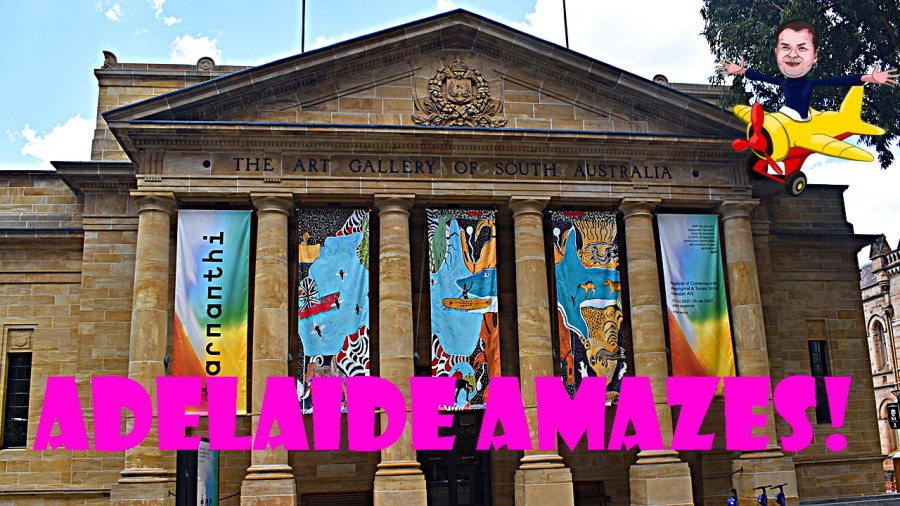 Folks, you may have noticed the odd photo or three from Adelaide on Wordless Wednesday. And some photos here and there. Well, this is because I hopped a plane there the day after Christmas and had four nights in South Australia’s capital, destination Adelaide!

So now it’s time to write about this city, which gets a bit of a bum rap in terms of reputation as a place that doesn’t have that much for the visitor. Well, I easily filled my days and was flat out, and there’s loads I didn’t see. So perhaps I can do a tiny little bit towards defying the reputation Adelaide has.

It’s often called the ‘City of Churches’, and to be fair there are a few churches in Adelaide but there’s a lot of other things to occupy the visitor’s time. There are museums, galleries, shopping, a great market and one of the world’s most beautiful sport’s stadium.

So where to start with Adelaide? The CBD is set out over a fairly large area I guess and it’s mostly a grid formation, so it’s not that hard to navigate. Inside this area the trams are completely free, so if you are up, down or across transport is available that will get you around. There are plenty of hotels in Adelaide, but at the time of the year I was there, just after Christmas, it was a bit on the expensive side. Adelaide’s value as a destination is not just contained in the centre of town too, there are things to do in the suburbs – I visited Port Adelaide, Glenelg and Port Noarlunga which I will talk about in the next post or two.

So let’s look at some of the things I saw when I was there.

So this is the main shopping strip, and the busiest place I found when I was there, although it wasn’t too busy. I can only surmise Adelaide was so quiet (and boy, it really was!) due to a combination of the time of year (first three days were public holidays) and corona virus concerns. Anyways, it’s a great shopping strip and there are a number of shopping malls (as in centres) along the outdoor mall, and arcades and the like. There are even places to purchase opals/jewellery which I noticed when walking the street (you can see my interview with someone who works at ‘The Unique Opal Mine’ in my YouTube video Opals and Architecture). There’s a great chocolate shop too which seems to be popular in South Australia – ‘Haigh’s’ – it’s an old style place with loads to excite the ol’ taste buds.

Along North Terrace (it’s a road) there is the State Library, Museum of South Australia and the State Art Gallery (of South Australia), all in historic buildings so it’s a good place to visit. I resolved to only going into one of these, and I decided on the Art Gallery. All are in historic buildings, and I’m sure worth visiting. The Art Gallery was free and had a real mix of art inside, from indigenous art, to colonial pieces and quite a bit of indigenous art too. Didn’t take more than an hour to tour, so I’d definitely recommend it!

This is a beautiful cathedral on the north side of the River Torrens, and is an episcopal church by denomination. It’s a charming church which you can walk around and they didn’t mind me taking photos and shooting inside too. If you do like churches, there are plenty more around Adelaide to pop your head and they probably are all free too.

Victoria Square or Tarntanyangga is a bit further south, and is an open space with a fountain, a Christmas Tree (at the time) and a statue of Queen Victoria. Adelaide was founded in the 1840s and was, like Melbourne, a free settler city. There’s a second fountain at the other end of the park too which is quite a nice little monument.

The Adelaide Central Market is a good market, housed in another historic building but redone with air conditioning, and despite keeping an historical context, is a modern sort of market with a few artisan shops selling coffee, cured meats, chocolates (Haigh’s again has a stall here), wine and more. There’s also fresh meat and vegies/fruit too. It’s opposite the Pricess (???) Theatre as well, which looks like another interesting building.

Speaking of interesting buildings, just walking the Adelaide streets you will past beautiful old buildings. The Central Railway Station for example is a great example. That’s next to the more modern Festival Hall which is an Adelaide landmark.

Festival Hall and the Sun City Casino (if you fancy a flutter!) are on one side of the River Torrens, the river than runs through Adelaide. On the other side, over a walking bridge, the Adelaide Oval has been delighting crowds since the second half of the 19th Century. It’s primarily a cricket stadium, but now hosts Australian Rules Football games each weekend of the AFL season too with both Adelaide sides playing their home now.

It’s a beautiful spot, and despite new stands being built a decade or so ago, has retained it’s reputation as one of the most beautiful places to play sport in the world. It’s scoreboard dates back to the early 1900s and is one of the oldest still in use in the world, only having minor modifications done over the ensuing 100 and a bit years since it was originally erected.

You can take in a game of footy or cricket (in the summer) at Adelaide Oval (although international tests and AFL games are often sold out) but I was able to take a tour around the ground, going into the change rooms, hearing stories of feats at this ground and actually going INSIDE the scoreboard to see how it works! If you have any interest in cricket or sport, I thoroughly recommend a tour. You need to book in advance online, at least at the moment. Interestingly this is the only place I had to pay to enter that I have written about in this post! (around $27AUD for the tour).

For more on Adelaide, next week I will talk about Port Noarlunga and Glenelg, and then I will do a post on historic Port Adelaide which is the place to learn about the journey from Europe to Australia by boat. There is still plenty more to explore in Adelaide too. So you can treat this as introduction to the city!

Thanks for popping by – May the Journey Never End!