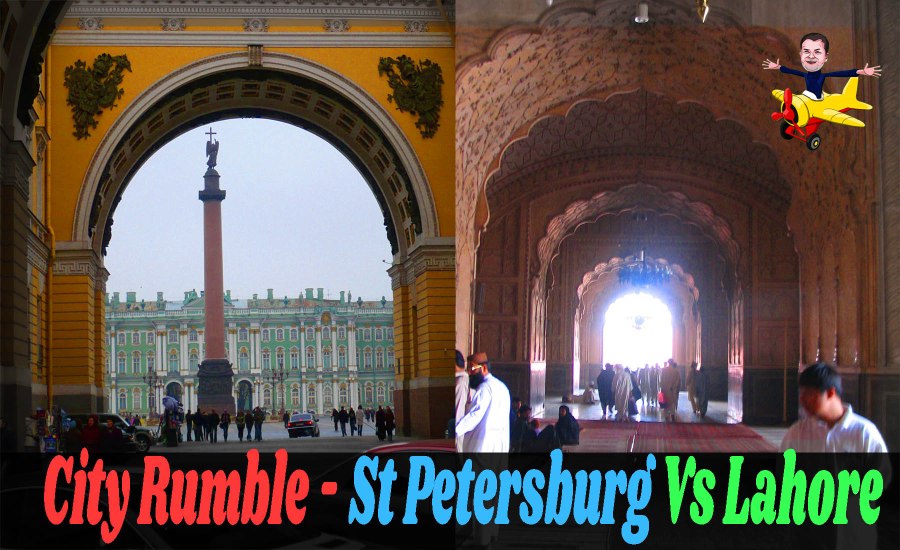 City Rumble time folks and if the last two were bizarre match ups, today’s isn’t any more logical either! Maybe I shouldn’t have drawn it quite as randomly as I did… But yes, it’s the beautiful, breathtaking and romantic St Petersburg versus my favourtie Pakistani city, Lahore. Lahore is not as beautiful, breathtaking nor romantic as St Petersburg, I say that straight off the bat. But – perhaps there is more to Lahore than first meets the eye?

Today we’re going to look at a few categories and see just how these two cities measure up against each other. So I have one simple question dear reader – Are you ready to RUMBLE? (yes I know it’s a bit of a departure but you know, gotta keep it somewhat fresh at least!)

How did they get here?

How indeed! Well let’s start with Lahore, which managed to bypass round one and straight into round two where it stood up against the city some 60km away only across the border with India, Amritsar. India may win the pagentry and ceremony of the changing of the guard at the Wagah border post, but Lahore won the City Rumble. Read all about it – City Rumble – Lahore versus Amritsar.

But today these two cities must do battle with a city very different from themselves. How will it pan out? Let’s find out!

St Petersburg is a city in the very west of Russia. It’s got a population of just under 5 million in the city proper, and around 5.3 million in the greater metro area, which I find surprising because it really feels like a very big city. It’s cold. There is snow in the winter up until probably late March, and there was still a few piles of snow shovelled off here and there when I first visited in April 1999. Summers rarely pass the low 20s for maximums, winter? Brrrrrr is all I can say!

Lahore is Pakistan’s second biggest city with a population of over 11 million, twice its opponent’s. It’s average temperature in the middle of the year is a tick under 35 degrees, so it is steamy and hot, although winter time it gets under 20 degrees for maximums. I was there in March 2004 and it was pretty warm, around 30 degrees every day.

Both are very busy places. St Petersburg has more of a logic to it than Lahore, although for the first time visitor it could be a little intimidating. But basically Nevsky Prospect is your main drag and everything peels of that to some extent.

I could find no right logic to anything in Lahore it is chaotic and full of auto-rickshaws and roads at strange angles and frankly, it felt to me like there was no logical centre. But at the same time, it was kinda cool!

Both cities are reasonably well connected, probably St Petersburg has more flights in. And you can catch direct land connections (and sea I think) too with trains from Helsinki and buses from Tallinn, for example. Aeroflot is Russia’s main carrier, and it connects Moscow and St Petersburg to much of the world, especially Europe. S7 is another popular Russian Airline with a number of connections. But also you will find any number of main airlines connecting to St Petersburg these days such as SAS, Lufthansa, Air France and at least most of the popular European carriers.

Lahore is more limited in connections, but as one of Pakistan’s biggest cities, it still is pretty well connected and you can use Middle Eastern Airlines such as Qatar, Etihad and Emirates for starters. Some European airlines fly to Lahore, but Pakistan has its own national carrier, Pakistan International (PIA) Airlines, and my words, translated into Urdu, appeared in their in flight magazine last year!

As for international land connections, you can’t really find them. India is the main neighbour, only 30+ kms away, but there are no cross-border trains or buses. However it’s not hard to get a lift to either border, cross on foot and continue by bus or auto-rickshaw to Amritsar.

Off the Beaten Path?

Russia is still not seeing the full number of tourists that it might considering how amazing the country is, and in particular. Having said that, it comes as no surprise that St Petersburg along with Moscow is one of the top two cities visited by foreigners in Russia. The Russian government had plans to make St Petersburg and Moscow (and presumably more of the country) visa free at some point last year, but then the pandemic hit so I’m not sure where those plans are at right now.

I wouldn’t call St Petersburg off the beaten path by any stretch of the imagination, but Russia as a whole is still not mainstream the way Prague, for example is. So you are less likely to see huge groups of tourists unless you’re at say the Hermitage which gets packed out because it is what it is.

Pakistan these days is off the beaten path and has been for nearly two decades. I went there in 2004 when tourism was on the decline. Lonely Planet haven’t released a guide to Pakistan this century to give you an idea of how few tourists see the place. Although, up until March last year, I believe numbers were slowly increasing. Lahore is probably the most visited city by foreigners in the country, but you could still wander the city for a few days I expect and not see another. It’s not hard to get there from India and if you were looking for a city to visit briefly to give you just a taste of Pakistan, well Lahore might just be the place! Of course though, you do want to take your safety seriously in Lahore and Pakistan and not deliberately put yourself in harms way, because terrorism is the chief reason people have not visited Pakistan much for the last two decades. That’s a much improved situation though I am pleased to say, but it would be foolhardy to think that the possibility has been irradicated.

Well, St Petersburg is going to have a lot more in the high end of the market. In fact, it has more in the low end of the market too as in hostels and dorm accommodation. In Lahore you can find cheap single or double rooms. But there isn’t a huge range of options if you are looking for a dorm bed in a room to share with a lot of strangers. If you like that sort of thing!

Personally I’ve stayed only in a hostel in St Petersburg and in a hostel and a cheap hotel in Lahore, but all experiences are a long time ago now. All in all you would be more comfortable I would think in St Petersburg. Doing research there were some good looking deals for 3 and 4 star hotels in St Petersburg for under $100USD. Lahore certainly could see you grab a grubby but liveable single room for under $20USD. It depends on your own preferences I guess. In general I stayed in places that were a little grim. If you are in Pakistan and Lahore, and you prefer to go low budget, do think of putting aside a little extra money for accommodation just to make it a little more comfortable. And unless you’re there in winter, air conditioning is probably a must.

Continuing on from the above section, Lahore is the cheaper of the two cities. It’s not dirt cheap but if you eat at a local curry shop you are probably good for a couple of bucks or less. St Petersburg has a surprising number of fast food joints if you are concerned about what you spend on food, you could potentially self-cater too if you’re in the right accommodation, but then again eating out needn’t break the bank. If you want a cheaper Russian meal look around for little canteens where you can choose from a list of choices. Russian food – borsht, meal, dumplings, it’s all great and usually not so expensive. More expensive will be international food. In both cities. But there is a bigger difference in price in St Petersburg.

In Pakistan I don’t really remember much about what I ate but I did go to Pizza Hut once for a change in Lahore and it was good. As good as you might expect at least! Pakistani food does have differences to Indian, there is more meat on the menu and you’ll find more options like shish kebabs and so on. And it’s still very spicy. In fact, I think the food in Pakistan is in fact spicier than the food in India. Personally, I don’t know why but I really like Russian food! I like Indian food and its ilk too, but I don’t like it to be hot! I know it doesn’t make a hell of a lot of sense, but that’s the way it is!

We have the Pakistani Rupee versus the Russian Rouble in terms of currency. One USD is just under 160 Pakistani rupees at the moment. It was a lot less to the USD back in 2004, maybe around 60 to the dollar so I guess it’s a pretty weak currency. The Russian rouble itself has been a volatile currency over the last few decades. Today you’ll get around 74 roubles to the dollar.

St Petersburg has plenty to keep you busy. The Hermitage museum is just one of the world’s greatest collections in an incredible building. Nevsky Prospect is an imposing avenue where the shopping is fine and it leads you from the main railway station and takes you to the iconic Palace Square in front of the Winter Palace. The Church of the Spilled Blood is a little St Basil-like, with an absolutely gorgeous exterior. And then there’s the Alexander Nevsky Monastery.

Lahore has it’s Lahore Fort, and opposite the Badshahi Mosque is opposite, one of the most beautiful and serene mosques in the entire world. The Minar-e-Pakistan is an iconic landmark in the middle of a nice park. I also visited Jahangahir’s Tomb, a little way from the centre, when I was there in large gardens which was rather beautiful too.

All in all there’s more in both cities I haven’t explored. Probably more in St Petersburg. Which I think takes the edge all in all in terms of sight seeing,

It could only be the city that is in my heart, and that is St Petersburg. It was always going to be a tough ask for Lahore to win this one. What do you think? Both has something for the visitor. Different, yes, vastly so at times, but really interesting, vivid places that stay in your memories for many years after visiting.

And thank YOU for visiting today! Take care, and May the Journey Never End!

#Gondar #Ethiopia with @globetrekking_nila and Graham! 2009, wowsers! What an awesome trip that was!
Yes the latest vlog is up and I'm atbit again! Beaches, banter and snorkelling! Check it out on my YouTube- link in bio!
Can't believe it's been 15 and a half YEARS since I visited Ghana!
Latest vlog and I'm exploring the port if Williamstown for you from boats to beaches and more!