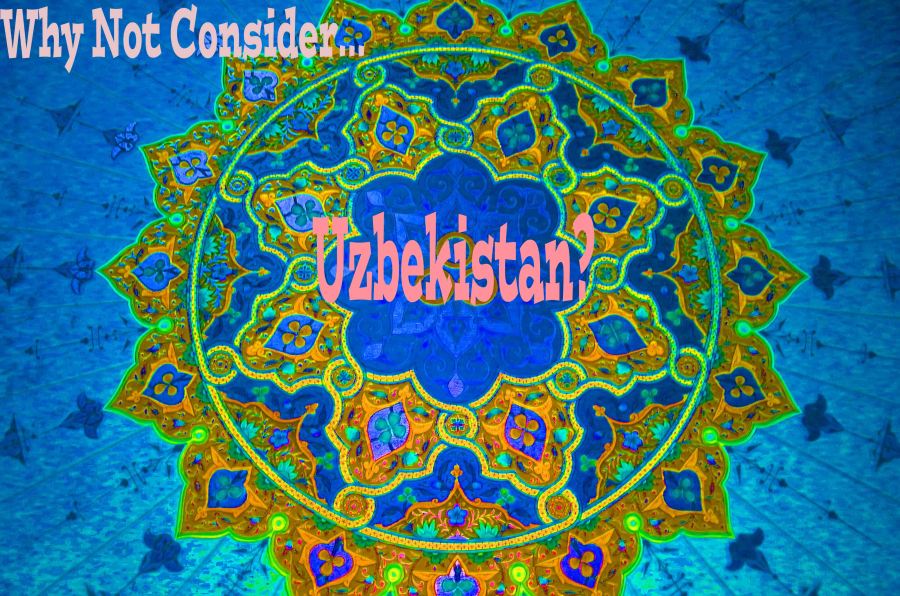 A friend blogger of mine has been raving about Uzbekistan of late, and although I wanted to find a different country to write about this week, I couldn’t help but end up falling back to Uzbekistan because it really is a rewarding country to visit.

The one issue that I did have with visiting Uzbekistan, a few years ago now, was the visa process. It was a struggle, especially from Australia where none of the Central Asian countries have an embassy, to organise this essential stamp. The great news is that a couple of months ago Uzbekistan declared no visas were required for citizens of 45 countries! And more recently visas were done online too. So if you worry about your paperwork, it’s no longer a concern for Uzbekistan.

And if you look at Uzbekistan’s neighbours and other countries in the region, you can’t help but notice it is now the only country in that part of the world that doesn’t need you to organise a visa!

Uzbekistan is well linked by rail, and today you will find a modern train system which includes fast trains that cut down travel times considerably as to what I experienced in 2011. They have the European Talgo which links Samarakand to Tashkent and Bukhara in the other direction. Tashkent, the capital, has its own impressive and expanding metro system.

Uzbekistan has plenty to see. Although much of the country is desert, it’s built around impressive cities, cities with a long history as important posts on the old Silk Road which connected China and Europe back in the day.

Tashkent is a busy, but spaced out capital with a number of large parks. There are statues and museums – including one dedicated to Uzbek Genghis Khan, Timur. Timur led the Uzbek people into battle centuries ago, and today appears on bank notes and all over the country as a symbol of pride and unity. Tashkent also has a wonderful market, interesting madrassas to visit and more.

Samarkand is one of the Silk Road’s most famous cities, and the Registan, three madrassas facing each other in the centre of town, is the centrepiece of this amazing city. Elsewhere you will find Shah I Zinda, almost like an old ancient city but actually a group of tombs all arranged in beautiful formation. The Gur E-Amir is a separate tomb in a different part of tomb, and is the tomb of nonother than Timur himself.

Bukhara is further down the line from Tashkent, and has a wonderful old city, a citadel, winding alleys and so much more. And then there is Khiva, home to another ancient city, one I am yet to visit but hope to this year!

On top of that it is possible to get out into the countryside and discover life out there too. Uzbekistan has a lot to offer!

The food may not be to everyone’s taste, and Central Asia is not a haven for vegetarians (although it’s perfectly possible to get by), but personally I really enjoyed it. Plov is the national dish, full of rice and beans and often meat. Manti are tasty dumplings, and like most ex-Soviet states, it’s never hard to find a shashlik – a skewer of meat.

The people are kind and friendly, I got to stay with someone who lived in Tashkent for my first night when he wouldn’t let me pay for a hotel. Oh, and it’s not an expensive place to travel at all. $30US should see you with a very comfortable room for a night – you may need to pay a little extra in Tashkent.

Getting There – the One Snag that Remains

Although it’s not impossible by any means to fly into Tashkent, connections to the rest of the world via air remain a bit of a sticking point simply because there isn’t the volume or interest from airlines. From memory it was no more than 6-7 hours to fly Tashkent to Riga, so it’s not that far from Europe. It’s not that close either, are your choice is limited to Uzbekistan Airways, a bunch of Russian of options including Aeroflot, China Southern, Air Astana, Turkish Airlines (often the best connections to Europe from Central Asia) and perhaps Lufthansa which I think also stops in Almaty.

Don’t let that put you off though, sometimes the challenge of getting there can be fun!

All in all, Uzbekistan is a surprisingly easy place to traverse and offers a lot for the visitor. Now that visas are no longer required to enter for so many nationalities, now is the time to discover this amazing country. You won’t regret it!

Thanks for reading – and May the Journey Never End!