So you may have noticed I’ve started 2019 off by posting on Cambodia a bit. My second ever backpacking adventure was a two month affair encompassing Cambodia, Thailand, the UK and then India on the way home, and I recently realised I’ve never scanned the pictures in from that adventure, so now seemed to be the right time.

Two weeks in India on the way home were basically sliced into time in Mumbai, on the west coast of India, the centre for the Bollywood Film Industry, and one of the busiest cities in India, and time relaxing beachside in Goa. 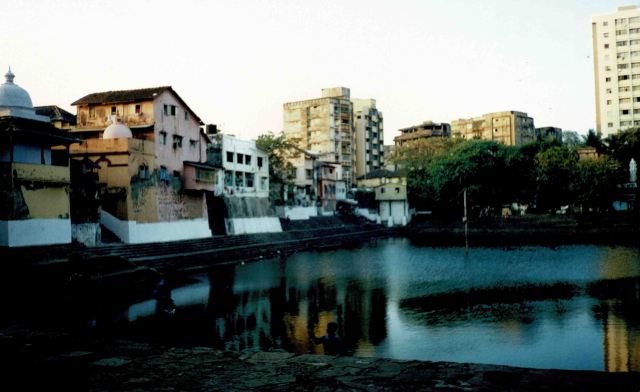 I’ll let you in on a little factoid – Mumbai is my favourite ‘big city’ in India. I gather from a local’s perspective you either like Delhi or Mumbai, not both. And I certainly feel that way leaning decisively enough towards Mumbai that I am basically lying flat on the ground.

I flew in from London on British Airways. It’s amazing what one remembers. This sticks in my mind as the most turbulent flight I have experienced in my life, and from here onwards I developed a little trepidation about flying, which I never had before. It may be that the memories makes it bigger or worse than it actually was.

I arrived at 2am and was promptly right-royally ripped off on the taxi fare into Mumbai. 90 US dollars or so. I was a real sucker. I had a nice guesthouse though, with breakfast in a leafy part of Mumbai. The next day I pretty much slept until after lunch. I went down to one of the local greens and met some youngsters and played cricket for a few hours. I met a local guy and chatted a lot – we went for dinner. No. not like that!

Mumbai was a special place, the mix of Indian and old-school British made something special here – but not for one second am I justifying colonialism!

The Taj Mahal Hotel is one of the most opulent in the world, I explored its lower levels filled with jewellery stores. Some may remember the Mumbai terrorist siege – this was one place the terrorists hit.

It stands on the shore line. Somewhere out in the bay is this long, amazing bridge I wish I had gone along. Right outside the hotel is one of Mumbai’s most recognisable landmarks – the Gateway to India. A big stone sort of arch at the water’s edge.

Another amazing colonial-era building is the Victoria Train Station, where I left for Goa in 2AC class (and on that train, it was really top notch stuff!). The building itself is lovely to walk around.

But in the other direction along the shore were a series of ghats which I spent time exploring and photographing. I was amusing enough to the kids there. There was a lot of washing going on. They are known as Dhobi Ghats.

I think in the same area is a house where Ghandi lived. It’s a little museum these day to the most famous man internationally from India. I visited this area with some Australian girls I’d met at the hotel, we had lunch out – I had this amazing dish that ‘sizzled’ and was served on the thing it was cooked on.

Afterwards we stopped in a local store for a drink, and were joined by a group of young locals and chatted for quite some time. They were amazed I knew some of the stars of Bollywood, and I remember I was told I looked like Aamir Khan. Less so today I guess! But we do both have that cleft in the chin!

It was a double decker bus back into town, which was very cool and very cheap. And very slow, the traffic barely moved. We must have gone through a market area because the roads were teaming with stores, most on the footpath. And what I remember most of all – so many gramophones for sale! If only I had a practical way of bringing one home!

Final two memories of Mumbai – having a shave in a local barber shop for next to nothing. As regular readers would know, I love a good barber-shave in India, and then trying some local Mumbai delicacy. It was some sort of vegetable spread on bread. And I remember I needed multiple bottles of water plus a couple of lassis to get through it – it was sooooo spicy!

I remember my time in Mumbai very fondly. Perhaps I should never go back lest I ruin that memory. But still I would love to return, and who knows, maybe buy me a gramophone. With a horn, of course! Have you been to Mumbai? Did it leave you with fond memories? Please do comment – and May the Journey Never End!