Hallo again! Hope your weekend is going well. This Sunday I’m shining the spotlight on a place I visited earlier this year, the quintessential ‘University Town’ – Cambridge. Sure, there’s Boston in the States, or Oxford much closer, but there’s no doubt that for atmosphere, history, alumni and well… the scale of the universities, Cambridge is the ultimate in University towns. 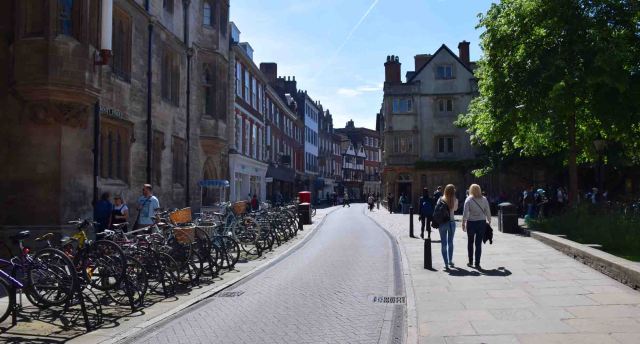 It’s such an amazing blend of architecture, lawns and canals. I arrived by train from London. The station is not quite in the centre of town, but there are plenty of public buses from the station to the centre. What is the main attraction for visitors? It is uncountably the collection of universities which are often open for the public. I was there at exam time however, and so although many universities had their doors open, many parts of the universities were closed.

But that’s not really a crimp on the day – because a single day, or even two or three would leave you happy in Cambridge. Especially if it’s sunny and mid-twenties (Celcius) like it was the day in May earlier this year when I was there. In fact, if all you do is walk around the backwaters, the fields on outer side of the river Cam, called ‘The Backs’. It’s really beautiful, green lawn rolling on and on.

Speaking of the River Cam, boats go up and down the river and other canals, being propelled by students with a large stick – it’s called punting and for 15 to 30 pounds you can take a trip on the river. And that’s a pretty essential experience for those visiting Cambridge.

Of the universities, I got a look at three. Firstly, Emmanuel College, which isn’t the most visited but it’s very nice, you walk into a big open area with again an amazing lawn. It was founded in 1584, so it’s got a fair history. Results-wise it has been one of the most successful colleges topping or coming in the top ten for results since 1998.

Trinity College is the largest college in Cambridge and was established in 1946. It certainly is impressive and has amazing, gothic-style architecture. Trinity College has produced no less than 32 Nobel Prizes and 6 Prime Ministers. Alumni you may have heard of include – Sir Isaac Newton, the poet Lord Byron, and Francis Bacon.

The third college I got a look at when I was there was St John’s College. Another grand and historic institution. The library there is well worth a visit. You have to wait in a line for a while because they only let a handful of visitors in at a time – which is fair enough. It’s filled with historic books, some in glass cases.

The town has plenty of eateries as well, plenty of choice. There was a market on too when I was there. But preparing a picnic and going out the ‘the Backs’ would be a perfect way to have lunch and spend a few hours.

Anyway you like to experience, Cambridge is a very special place! Thanks for reading, May the Journey Never End!