As the first year rolled on, things got a lot easier. I got into a rhythm and I developed better lesson plans and better understanding of what I needed to do. As you’d expect, right? Also I got to know the students a lot better, know them by name, which really helped. Not all of them, of course, but well, a good number.

Interac, to keep you up to speed, have trainings at regular intervals and will watch your classes. For the people in their first year, they may well get a number of observed lessons, which can be quite nerve-wracking. My first observed lesson took a little while to come, in June 2012 just before the first set of exams. High Schools run exams four times through the year, and as an ESL teacher I was asked to make part of the exam for some of my classes. I was also asked to do a bit of correction, my tests and some of the others.

It’s pot luck really whether you’ll be asked to mark half the school or nothing at all, but probably it will be somewhere in between. So, my first observed class was a revision one for the second year test. Maybe that helped me, because I knew what had to be revised and there was less pressure for it to be an amazing class. I still remember being very nervous beforehand. Afterwards, the area manager who had observed the class was very complimentary and I needn’t have worried.

He also passed on a great tip I used from then on in – with the worksheets, make an A3 copy of each page and stick it on the board. Then you can point to where the class is at on the worksheet and the struggling students won’t get lost. He also advised me to try taking a little timer to class and give the students set times to finish tasks, which also worked wonders for me. So there are some hints in lessons if you’re struggling at all – they both really help you hold the lesson structure in the classroom.

I had two more observed lessons in the first year. One was right at the end of the school year and someone from the Board of Education was going to come, and I was pretty nervous. In the end, they pulled out and the person who came to observe was 15 minutes late! Interac often videos lessons too to use for training purposes. The last two classes I had observed were both F classes – all boys, the rowdiest classes I had. But, they were suddenly amazingly well behaved with a guest in the room I am happy to say!

In my second year, I only had one class observed. If they feel you are going all right, well, Interac don’t give you a lot of observation. It’s tougher on those who are struggling a little, I know some people were observed very often because of issues the school had. If the school doesn’t say anything about the teachers, well, life just goes on. If they complain, Interac get worried about the contract to that school and will do as much as they can to keep the school happy. 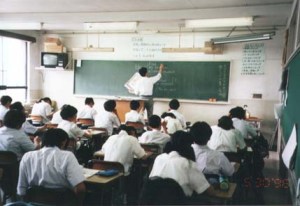 Trainings were again more frequent in my first year. In my second we only had two. There were area trains and prefectural trainings, the latter of which involved everyone coming to Morioka for a big meeting. They cancelled the January training this year because in 2013 a couple of people had car accidents thanks to the snowy conditions on the way to Morioka!

Area trainings were quite relaxed, and neither rivalled the orientation week for stress levels. It was really valuable to be able to spend time talking about issues and instances that cropped up in the class room and ways to deal with them. Not just the class room but also with staff. Debriefing is always valuable.

Demo lessons are also something practiced in training. Or videos watched. This did get a little tedious at times when 8 people gave the same demo lesson (albeit a shortened version) over and over again. But in a small group it was always possible to have a little laugh here and there, making it a good experience.

The prefectural meetings sometimes included a talk about road safety, especially the one that came before winter. They showed us a video of taxis involved in accidents as the taxis must have cameras fixed. As my friend Luke said, ‘the only thing we learnt was not to get in a taxi in Morioka!’

That’s pretty much the extent of the training and observation from Interac, who I think are more thorough than some others. Next week will be the last in this series when I’ll talk more about life, bills, taxes and getting out. Tomorrow, it’s time for another Sunday Spotlight, so don’t miss that one either! May the journey never end!

One thought on “The Interac Experience Part Five – Training & Observation”

Thanks so much to all my subscribers! If you haven't yet go to
From the vaults of my video tapes I bring you a look at the incredible Dom Cathedral in 'A Sniff of Cologne'. Yes I can be humerous when the mood takes me!
Going for a walk is the best I have whilst on short holiday in lockdown...