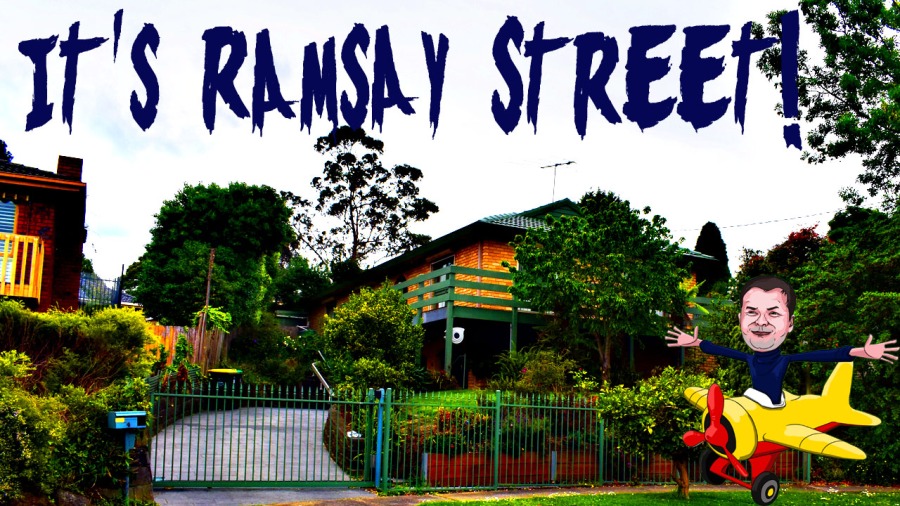 Howdy all! Hope you are all doing well this week. Not so long ago I got out and about in Melbourne again to film a few more episodes of ‘Melbourne Revealed’. I had a bit of a short list of things to look in, and an idea that came up sort of last minute was to visit Pin Oak Court, better known as Ramsay Street, the fictional yet real I guess street where Australia’s longest running soap Opera is set/filmed. Why? Why not? It’s a national export and it has been in the news this year as it finally wrapped up mid-year when Channel Five in the UK decided to use the money they put into the show instead towards local productions. Anticipating your next question – the UK discovered Neighbours a few years after it started in 1985 and it became so popular there that one episode had an audience of over TWENTY MILLION. In fact, it might have been more viewers than watched the marriage of Lady Diana and Prince Charles.

However, somethings don’t die easily. Less than two weeks ago it was announced that Neighbours was coming back thanks to a deal with Amazon. I have to be honest, I don’t see the point, but you know we will see if enough people stream it to make it worthwhile. Personally I think they are flogging a dead horse. But presumably they have done their due diligence.

For those who DON’T know Neighbours, it began in 1985 on the Seven Network here in Australia before the Ten Network picked it up the following year. I guess it became popular in the UK because it was a slice of Australian drama which never got overly dramatic and had a lot of likeable characters. The number of actors who have appeared in Neighbours is astronomical and the cast turn over has been great over the 37 years it’s been on our TVs.

I don’t think that there is a show on Australian TV which has actually produced more superstars than Neighbours. For example – Margot Robbie, Chris Hemsworth, Jason Donovan, Guy Pearce, Alan Dale, Natalie Imbruglia, Russel Crowe, Jesse Spencer, Eliza Taylor and Kylie Minogue for starters who have all gone on to international fame and in most cases, superstar status!

When I first travelled in 1999 I met a bunch of people who when they heard I was Australian asked me about Neighbours. Had I met anyone from Neighbours? Well, actually I went to school with two actors who both had major roles back in the 1990s in the soap. And I also met a girl from Malta who came and stayed with me in 2000, and when I asked her what she wanted do whilst she was here, and the first thing she asked was was it possible to visit Ramsay street? I must admit I was a little taken aback because I had no idea they showed Neighbours in Malta for starters. So anyways, I took her to Ramsay Street, or as it’s known on a real map, Pin Oak Court in Vermont South (an eastern suburb of Melbourne) and indeed she was pretty excited to visit!

So, what can you expect when you go there? Well, if they’re not filming it’s a quiet, short court in Melbourne’s east. It’s unremarkable, but perhaps that’s the whole point. You can see the houses where Toadie, Dr Karl Kennedy, Charlene et al all purported to live (let’s be clear, only the facades of the houses were used everything else is in studio). People live in each of the houses and I presume had an agreement with Channel Ten/Fremantle Media about the use of their street and the front of their houses. I wonder how they feel? Were/are they thrilled to have such a famous address? Or did it really annoy them? I was surprised to note that the houses really haven’t changed much over the journey and as such they do have a very 80’s feel about them. I wondered if that’s something in a contract. What if they wanted to knock down and build? How much power does the show have over the houses on the street?

Most of the frequently used exteriors is actually a set at the Nunawading Studios, located on Hawthorn Rd only 5 or a little more minutes drive from Pin Oak Court. By driving around the back to one of the streets that finished at a fence, we were able to catch a glimpse of the set including the famous mechanics, the nursery and the back of a café. You can’t get a great look at it, but it was something for the vlog.

There are Neighbours tours that you can take, I believe they still run, and you can get inside the studios and onto these outdoor sets. Lassiter’s Pub, the lake and the bridge, the tram that became a little café, they are all there on site as well but not too close to where I peaked in through the wire fence as best I could. They didn’t destroy anything in the break it looks like, which is a good thing I guess as it is coming back.

And so that was my day of Neighbours discovery! You’d need a car or take a tour if you’re visiting from afar. But you can get a bit of a glimpse under your own steam which is nice. Only for the fans though really. I’ve seen a bit of Neighbours – it’s hard to completely ignore it and at work I work in the evenings and some of my clients have it on, so I’m familiar enough with it and did watch it on and off (mostly off to be fair) in the 1990s. So many things have changed since then. But Ramsay street? Not so much.

Thanks for popping by today! Wherever you are in the world, take care, and May the Journey Never End!

6 thoughts on “Neighbours and Ramsay Street – A Reason to Visit Melbourne??”