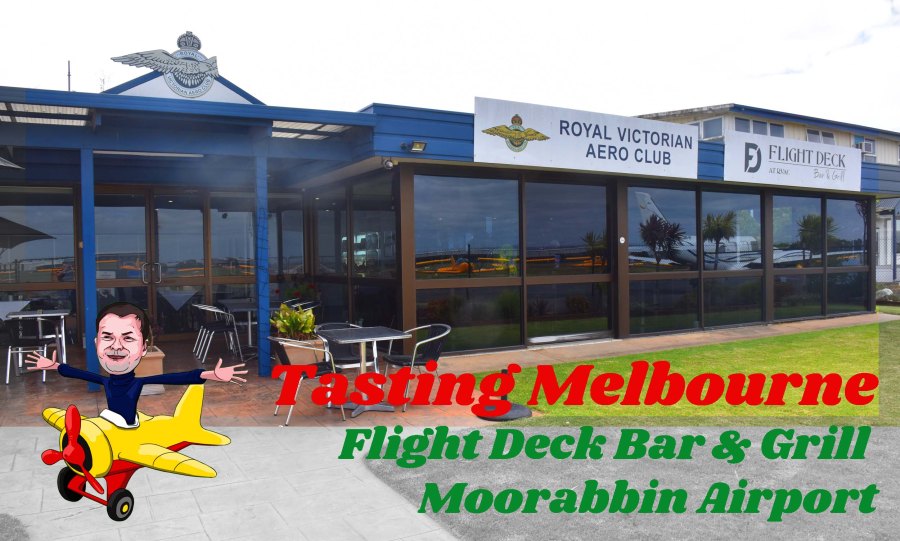 Back earlier in the year I did a ‘Melbourne Revealed’ on the Aviation Museum in Moorabbin, a south-eastern Melbourne suburb right next to the airport there, which handles small plans only. I had heard about the Flight Deck Bar and Grill and had hoped to have lunch there that day, but was disappointed to find it was shut on Mondays. Which it was.

So I had it filed in the back of my mind as a place to go back to when open and have myself a meal, and I took the chance when I had a free day to catch up with some friends from work so I suggested it as the place to get a meal, and was happy when they decided to give it a go.

The idea of a restaurant/bar at a small airport was a curious one at first, but it seemed like a good idea to me. It’s open every day, 11am until late, with the exception of Mondays. I booked a few hours earlier, but didn’t need to but these are Covid times and well, you may need to at other times. And it was a Tuesday too, which I would hazard a guess as being the quietest day of the week.

We arrived at one o’clock and surveyed the scene. The building was a bit like an office block I guess. There was good signage though, but you are in a sort of… well it’s not an industrial area, but there are lots of offices, mainly for small airlines, and they back onto a fence and on the other side, scattered around are many light aircraft. From here companies do freight and other things, and you can take joy flights as well around the area and over parts of Melbourne. Hmmmm. That sounds like a fun idea…

Anyways down a corridor to a couple of doors labelled ‘Business Class’ to the left and ‘First Class’ to the right. First Class was basically the restaurant area and Business class was the bar, but they were opened up together and there were a handful of customers there. We could have sat outside but the weather was windy so we opted for inside. It not being busy allowed us to take a window table and add another to it so we had plenty of table-top room.

Outside the window was the outdoor seating, inside a fence and on the other side of the fence was the airport and runways. We saw fire safety vehicles running up and down (no incidents, just business as usual) and of course we saw planes taking off and the odd one landing. I must admit I was the only one excited at the prospect and I ducked out at one point just to grab a couple of photos. It was pretty cool by the way that whenever I turned to my left and looked out the window I saw planes taking off!

Inside it probably could have been a little fancier. But there were people in pilot’s/captain’s uniforms drinking at the bar and people coming through who were flying all the time. It was the closest I had been to flying for over a year!

The food though, right? Well one friend ordered a risotto. And I and my other friend both had… the chicken parmigiana. I know, I often go straight to this classic but it’s hard (but not impossible) to stuff up. The menu had your classic meals that you get at nice pubs in Australia basically.

I am pleased to say that the food was really good, it got thumbs up all round. They nailed the parma which included ham and a very nice tomato sauce. The risotto got the thumbs up too. Oh and there was excellent service as well, and the mains were around $25AUD which is very reasonably priced.

It’s not so easy to get to I guess, a car is almost a must. Unless you have a light airplane I guess! Personally I would recommend it – it’s good food and it’s a unique and cool place to dine!

Thanks for reading today, take care wherever you are – and May the Journey Never End!