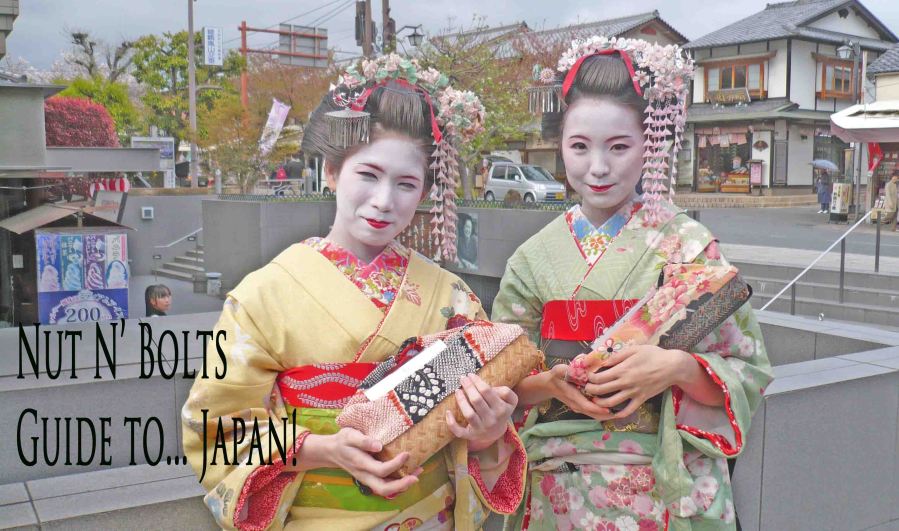 If you’re heading to Japan, and why not? – it’s undoubtedly a brilliant destination and right now EVERYONE is going there, here’s a qu8ck guide to get you prepared. First of all – it’s pretty hard NOT to have a good time in Japan. There is so much to see and do and the people are really friendly and helpful. Things work efficiently and well almost without exception, it’s spotlessly clean, has brilliant places to hike, ski, things to do, theme parks, mountains, beaches in the south, temples everywhere, castles…. You could easily spend a good six months in Japan and still have a lot to see. But here are some basics it helps to know before you go!

The main airport is Narita, which services Tokyo. It’s a long way from the city so you need to take a train in. The express train is super fast but expensive, the regular train can take well over and hour but doesn’t cost nearly as much. Haneda also services Tokyo and is much closer in, so if you get a choice fly into Haneda. It’s a smaller and less busy airport.

There are many other cities with international airports too, Sendai, Fukuoka for example. The second biggest airport I believe is Kansai airport, which is closest to Osaka. Which in turn is 20 minutes on the fast train from Kyoto and not much further from Nara.

I have always found getting in and out of Japan super easy and super efficient. They open up lanes at immigration at the right times, the officials are courteous and friendly, it’s really a unique airport experience! Most people from ‘Western’ countries get a visa on arrival, which is like a postage stamp they stick into your passport.

So Japan is a really easy country to get around, and the ultimate way is by train, and in particular the bullet train – the Shinkansen. A 500km journey can be reduced, on the right train, to less than 2 hours. As a foreigner spending any time in Japan and trying to visit multiple cities or places, you simply must invest in a Japan Rail Pass. There are a raft of different options. But used wisely it can save you hundreds of dollars. Research where you need to go and what it costs to check if it’s worthwhile. It almost always is.

Taking the bus will save you money. It will cost you time though. Its not overly popular but there are plenty of options and there are plenty of night buses too, which I found rarely full of passengers! Japan Rail actually run a lot of buses themselves. The motorways are pretty fast and efficient, but smaller roads and roads in towns can be very slow as they are rarely more than one to two lanes maximum each way. Driving is an option too, but can be a frustrating one. The motorways are mostly tolled which significantly adds to cost.

Thirdly, domestic flying is gaining popularity and Jetstar even have now ensconced themselves in Japan. For a long hop say from Sapporo to Tokyo, this would probably be worthwhile. It’s also very cheap I believe! But you do have to get out to and in from airports.

Japan has always seemed to hold a reputation as an expensive country to visit. I don’t think it necessarily is to be honest – in fact places like Western Europe and Australia are easily more expensive destinations.

Transport and accommodation are almost always your biggest pulls on the wallet, and in Japan that’s definitely the case. Transport you deal with with rail passes and even taking buses, accommodation though is a little less straight forward.

Japan is a group of islands with a lot of mountains. Every square inch of the place is used as best it can – from farmland to Highrise buildings in the cities. Which means space is something you pay a premium for.

Hence they developed things like ‘Capsule Inns’, where you sleep in your own little capsule. This is obviously going to cost less than a regular hotel – although in Tokyo you can still pay a pretty penny for it.

There are a couple of chains of budget-business hotels. The most well known is called the Toyoko Inn and you can find it everywhere, often multiple hotels in the one city. On a side note I remember staying at one driving from Tokyo back to Ichinoseki, and the car was parked in this ‘stack’ car park where the car is put on a sort of lift and slotted into a cubicle, basically the equivalent of the sixth floor.

The Toyoko Inn will vary in price from town to town, but you can expect to pay $70US or less for it in general. Less in less-frequented towns, more in say Tokyo. It’s very compact and each room is pretty much identical. The bathroom is very tight (built from a plastic mould) but you have a bed, a TV, the usual amenities and in the lobby you have vending machines with noodles and other meals and the chance to boil water or heat them up.

Hostels are excellent in Japan, and if you don’t mind sharing with a room full of strangers, you will certainly save a heap of money. I had my own room for example in Kyoto with shared facilities and that was well under $50US.

The hostels often have single and double rooms too, and are so clean and well equipped, with friendly staff and usually a bunch of tours and activities to join in on. K’s House in Kyoto is probably the best (or at least my favourite) hostel I have ever stayed at!

Food can be expensive at restaurants, but there are so many other options. A bowl of ramen never cost me more than $7US at a ramen shop, and they are big and filling. You can find plenty of quick meals and options at convenience stores. The fried chicken there is to die for!! Then there are sushi train type restaurants as well (which generally have a lot more than just sushi!) – they are reasonably cheap, and there are plenty of fast food type places, western usuals to Japanese ones. And if you’re in a hostel you can self cater. So really, if you plan ahead, you can keep costs down.

Going out though will probably cost a bit, drinks and entrance to a club or whatever in Tokyo for example, if you do want to have a few drinks, well, $100 could disappear pretty quickly.

Japan is a country in which the convenience store really seems to thrive. From Seven-Eleven to Family Mart to Lawson (I have no idea why it’s called Lawson but I guess it has to do with America in the post World War Two period). There you can often get money out (7Eleven is THE best place in Japan to get money out from an ATM). And so much food, you can pay your bills, and even get tickets to places such as Disneyland! And they are literally everywhere. You’ll also find vending machines, working perfectly and without graffiti.

So Japan is a pretty formal country as it is reasonably well known. Be polite. Take your shoes off when entering someone’s home or a temple. Making a phone call on a train or public transport is a not done. If it’s an emergency, keep it quiet! Apologies are really important, people will apologise for anything in Japan, even if it is not in any way their fault. So you know – you’ll want to do the same. ‘Su mi ma sen’ is a basic ‘excuse me/I’m sorry’ and along with ‘arigatogosaimasu’ (thankyou) is the most important thing you can learn to say before you go.

People don’t get very angry in public. You may want to do a slight bow when you meet someone, and if invited to someone’s house you MUST bring a gift. Very bad form not too. But I really could go on forever about this stuff. Just observe for a little bit and see what is normally done. Being too forward or too loud can offend or even scare people in Japan.

Kyoto, Tokyo, Hiroshima, Nagano, Nara, Osaka, Hokkaido, Mt Fuji… an itinerary can be as long as you like. I have written a lot of posts on Japan over the years. No doubt there will be more in the future. Take a look at this post – 3-week itinerary for Japan for some basics!

Thanks for reading today! Take care, visit Japan (you WON’T be disappointed) and as always – May the Journey Never End!