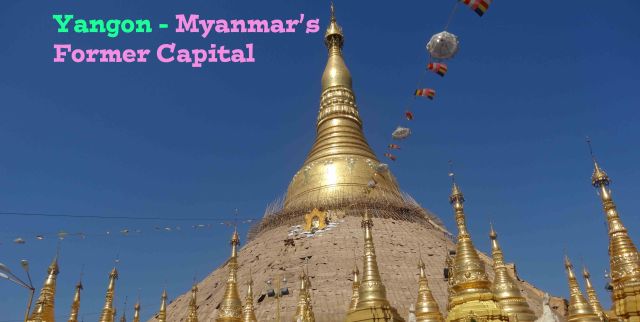 It seems in Myanmar they like to change the names of places. From Burma to Myanmar (As JP Peterson once said, you may call it ‘Myanmar’ but to me it will always be ‘Burma’) and Rangoon to Yangon. And then, of course, they moved the capital completely to a place called Naypyidaw. Oh, the flag has been changed too.

Yangon ceased to be the capital in 2006. However, with 4.5 million people living there, it is still the biggest city in the country – Naypyidaw has less than one million by comparison. It is still the easiest place to get in and out of as well, still having the busiest airport.

Name changes – albeit during a time of rule by an internationally condemned regime – are understandable. The name ‘Rangoon’ certainly more than hints at a colonial past, being one of the bigger cities the British based themselves for so long in Asia. Burma too is a title that much more than Myanmar has ties to the former British Empire.

Should you head there? Well, if you are headed to Myanmar you may well end up going there. It has a hustle and bustle that much of the rest of the country lacks, which may not be a good thing. Mandalay is widely considered the country’s second city, but by comparison it is certainly much more laid back. In fact the roads seem wider, the people warmer.

Yangon in contrast feels very different to the rest of the country. And it’s not just because it’s busier. You have embassies and commerce to an extent you just don’t find elsewhere. And I think, due to limited transport options, and longer-than-you’d-expect travel times, Yangon is still the sort of central city (although it’s in the south!) that the people flock to for a better life and more opportunities.

I don’t think it’s one of the world’s greatest cities, I have to be honest, but by the same token I certainly didn’t hate it and I’m glad I visited it. Here you see colonial buildings along with new developments. The buildings are reaching for the sky as they are in so many South East Asian cities, but that is kind of a positive I feel. It’s still a city where the motorbike seems more useful and at times more prevalent than your typical motor car.

It’s not a city with good, fast transport. I relied mostly on taxis and they sure got stuck in the traffic a lot. The traffic does not move well in Yangon. So any venture out into town will require you to allow for excessive transport time. But at the same time, Yangon life is buzzing around you whilst you wait for your taxi to move forward a few metres and then stop again.

There is this wonderful ‘Circle Line’ train you can take. More as a ride, it does a big loop that actually takes you out of the city and then back. It’s not frequent enough or fast enough to warrant use as public transport to be fair. It takes about an hour and when you’re on it you really get a sense of the city, and indeed the countryside not too far from town.

The Shwedagon Pagoda is probably the city’s main tourist site. There are more temples in Yangon, but if Yangon is your last stop in Myanmar, as it was for me, you may be ‘templed out’. But don’t miss this one, although be aware that it is ridiculously busy. You get taken up to it in a lift, which is kind of novel. The huge golden stupa in the middle is surrounded by smaller places of worship. You can easily spend a few hours exploring the whole place. Be aware, the ground up there is HOT and you aren’t allowed to bring or wear your shoes. And yes, there will be a lot of people up there taking selfies!

You can see though the combination of the rural and urban all in one, the colonial and Burmese, a sort of almost hidden vibrancy amidst the smoke and bustle of a thoroughly interesting place. Despite colonialism and a repressive regime, Buddhism has still flourished. Businesses still profit and as things become more relaxed from a point of view of the authority, Myanmar is slowly but surely developing. And at the same time, it’s not an explosion of glitz and backpackers (yet!) like it’s neighbour Thailand.

So, why not consider giving Yangon a visit? Thanks for reading today – May the Journey Never End!