Doctor Who is in the news again this week. I wasn’t expecting the (exciting) announcement of the new Doctor so soon, but I was planning on a more detailed account of my Doctor Who Day from my latest trip – the Missing Episodes Day run by Fantom Films in Rickmansworth, near London.

Okay, so context is needed for those readers who are not Doctor Who fans I suspect. Doctor Who started in 1963. Since then there have been 12 (soon to be 13) actors playing the Doctor and like I dunno, a gazillion episodes made. Well no, but it’s certainly quite a few.

Between 1963 – 1969, the first six seasons of the show, over 260 episodes were made. Today, there are 97 episodes that do not exist in the BBC archives, or to our best knowledge indeed, anywhere in the world. This event featured appearances by people who appeared or had something to do with these episodes, or indeed finding ones that were missing or restoring them. If you go back to the mid-1980s I think it was more like 120+ episodes that were missing, so quite a few have turned up since then, some in far flung places including Hong Kong, Nigeria and New Zealand.

So I took a train from London to Rickmansworth. I think it was around an hour or a little more from where I was at – Edgeware Rd, to get there, to a sort of community centre that was primarily a cinema. Were be about to be treated to an unknown returned episode no-one had seen for years? Naturally that was the hope for many who turned up, albeit not a strong hope. I certainly didn’t believe it was in any way likely. And I was right.

However, I did get the chance to meet some people who probably will never make an appearance in Australia as we have very few conventions, it’s a long way from Britain and well most of the guests were getting on a little. 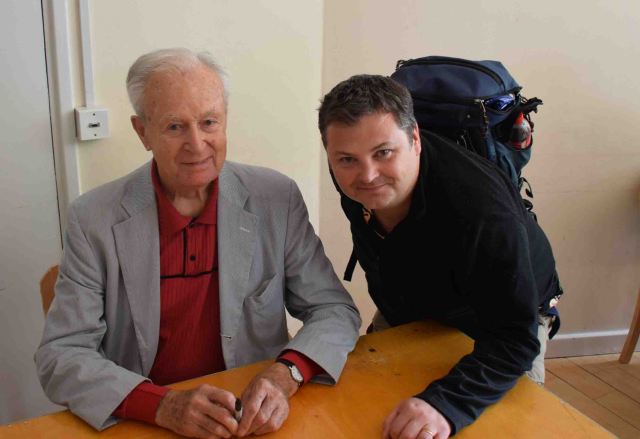 For example, the consummate gentleman William Russel, who appeared in Doctor Who’s first episode back on the 23rd of November 1963 and was with the show for nearly two years. What an honour to meet him! He’s 92 I think at the moment and is doing very well indeed.

Peter Purves was pretty much his replacement in 1965. Peter is also known for a long stint as host of the popular Blue Peter TV Show in Britain, he’s 78 now and also charming and kind.

Everyone’s favourite is probably Anneke Wills. Anneke was in the show for around a year as Polly, the 1960s ‘it girl’, whatever that really means. Today she’s incredibly friendly and happy to sit around with fans and chat about the show and whatever. Which is a bit of a rarity. No-one is more forthcoming with stories or just general warmth towards the fans, and let’s face it, we’re a pretty weird bunch!

On top of that, we have a number of actors who appeared in non-regular roles in the 1960s, as well as members of the restoration team who restored all the old episodes from 1963 to 1989 for DVD release with love and meticulous care. The Doctor Who range is second to no programme in the way the episodes were restored and the extra features produced! There was a guy who saved a lot of episodes from being scrapped back in the late 70s when it was discovered the BBC were junking tonnes of black and white programmes on the pretence that they no longer had any resale value. It seems they were a little short sighted!

And I forgot to include Waris Hussein, the director of the very first Doctor Who serial ‘An Unearthly Child’ and the missing seven-episode story ‘Marco Polo’.

So the day was full. There was an autograph room and a main stage. I admit I felt a little short changed in as much as no-one had a long time on stage, and some (Anneke especially) could have talked for half the day by themselves!

The numbers… well I guess around 200 turned up to the event. It was a rewarding day. It all came to a quick end as they had to vacate the cinema/stage by 5pm! There was a raffle and the main prize was a framed print from the classic story ‘Tomb of the Cybermen’ which was lost but was found in the early 1990s in Hong Kong. It was a large print, and on the back most of guests had signed.

I checked my numbers as the prize numbers were read out. The minor prizes were DVDs or CDs or a book, I was hoping maybe I would win something. Except… when I did, it turned out to be the framed print! Nice prize, but I had to take it to several locations in France and Japan before returning home! 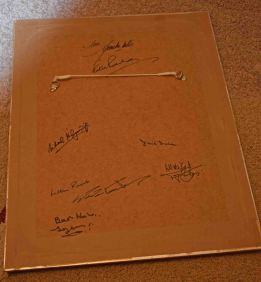 Nevertheless I did it! I got it back in one piece, and here it is today! A nice, if large, memento from an event where I got to meet people who made significant contributions to the TV show I can’t help but confess I’ve been utterly addicted to now for over thirty years! May the Journey Never End!