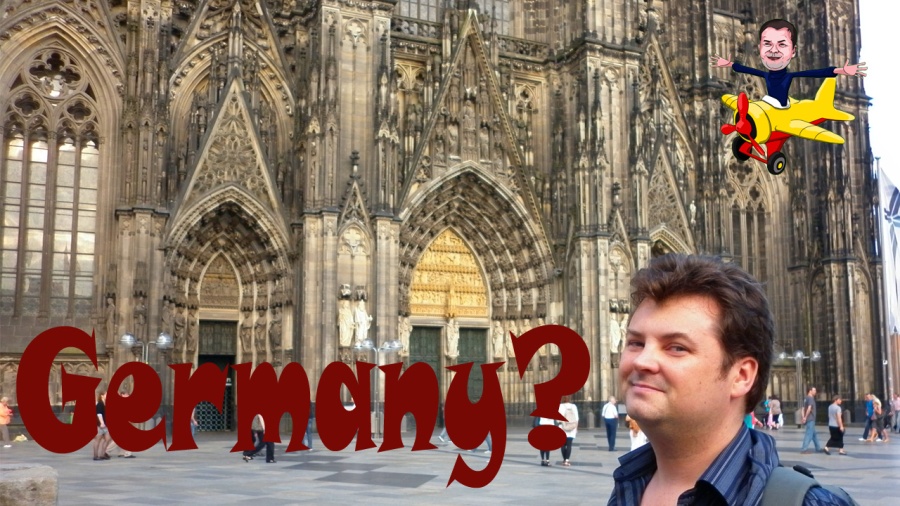 Ok that is my best rendering of the German National Anthem. As in that’s as far as I get before I don’t know the words. Today, as you might have guessed, I have decided to do a post on Germany. It goes back to a post less then two weeks ago I posted listing countries I recommend in Europe to visit. And Germany – well it wasn’t on the list and I had a couple of comments that pointed this out. And you know, over the years I’ve been doing this blog, I haven’t really written much at all about Germany.

It’s not that I haven’t been there, I have, a few times, but I also feel like I haven’t really explored it much in depth either. Germany is an interesting beast, and probably the thing I like most about it is travelling by train. The network in Germany is excellent. The cities are varied and contrast each other in the way. Just because it isn’t at the top of my list doesn’t mean I don’t think Germany has much to offer, in fact it has a heck of a lot to offer. I’ve only been to a handful of cities, and I’ve had the pleasure of a few Bavarian hikes which were pretty magnificent although I have to admit to not really remembering what the bloody hikes were exactly. Anyways, today I mostly want to turn to the cities.

So Hamburg is last on my list (well first as it’s a reverse list) and that is simply because I went in 1999 and I have no freaking memory of the place. Well, I remember it was cold and raining. My 1999 round the world trip was the first big trip I have ever had and I have clear memories of some parts, but by the time I got to Hamburg the memories fade a bit. It was only a brief stay and I didn’t really get to explore the city that much. My best friend was getting married and I stayed with his fiancé – he was out of the country because he needed to stay out for so many days so that he could re-enter. Basically a visa run without the visa. Anyways. I’m sure it’s a town worth time and effort. Which I didn’t give it.

So, the most time I’ve spent in Germany has been in or near Munich. With family  an hour or so’s train ride away, they are actually slightly closer to Salzburg in Austria and the best time I’ve had in Bavaria was going to different towns in the area. I even did some bike riding there! But Munich is a really nice city, it doesn’t feel awfully big, with an attractive town centre and it’s famous ‘Glockenspiel’ which goes off every day at 11am and 12pm and figurines come out and tell a little story. That’s on Marienplatz.

Some great museums in town, it’s really pleasant to walk around. I spent time in a gallery or two on a Sunday when they were free. But I never really experienced a lot of traditional reasons people visit Munich – ie beer halls and Octoberfest. Although I did drink beer in a few places. The weather is warm to hot in summer and Munich is the capital of Bavaria, which is a bit of a fairytale region, it’s the essential Germany I think in many people’s eyes. Having said that, many Bavarians consider themselves Bavarians first and Germans second.

The German capital is, I feel, almost the ‘forgotten’ capital of Europe. Not saying it’s the ‘capital of Europe’, just it’s an overlooked city amongst the Paris’s of Europe. And Pragues. But actually it is, as most who visit it know, a great city!

It has a really funky vibe in places and has an amazing mix of eras and histories. Along with famous landmarks such as the Brandenburg Gate, the Reichstag in its more modern glory, there is of course the history of a city divided by a wall for so many years and the chance to see the remnants of said wall, visit a museum about the wall, and the kitschy-est thing to do of all – visit the Checkpoint Charlie Museum! Which is right next to Checkpoint Charlie which is still kinda there for tourist purposes.

There are churches, a TV Tower and more in Berlin, and clearly there is an underground ‘youth’ movement (forgive me today, words are not flowing as I would like lol) and there are a lot of artists and the like based in Berlin. For me the city is one of the best in Europe, and I feel it is quite underrated.

Cologne, or if you want to be strictly German, “Koln”, is my favourite city in Germany. Great buzz, incredible ‘Dom’ Cathedral, one of the biggest in the world, little museums here and there, art galleries, squares, it’s a buzzing place I really liked. I thought I would have more to say as I remember enjoying it so much…. Oh the banks of the Rhine River is a splendid place to chill and listen to jazz.

I remember meeting some great people in Koln too so it is just a city that makes me happy when I think of it.

And those basically are my recollections of Germany. It’s a big country and so there is so much for me to explore one day. I think though that I will be going to different places before returning to Germany. Sometimes I think of places and I think ‘when I’m older and feeling less intrepid’ and I guess I feel that way about Germany.

And to all those Deutsch-a-philes out there – what would you recommend? Let me know!

Thanks for popping by today! Wherever you are in the world you are – take care, and May the Journey Never End!

5 thoughts on “Andy in Germany!”