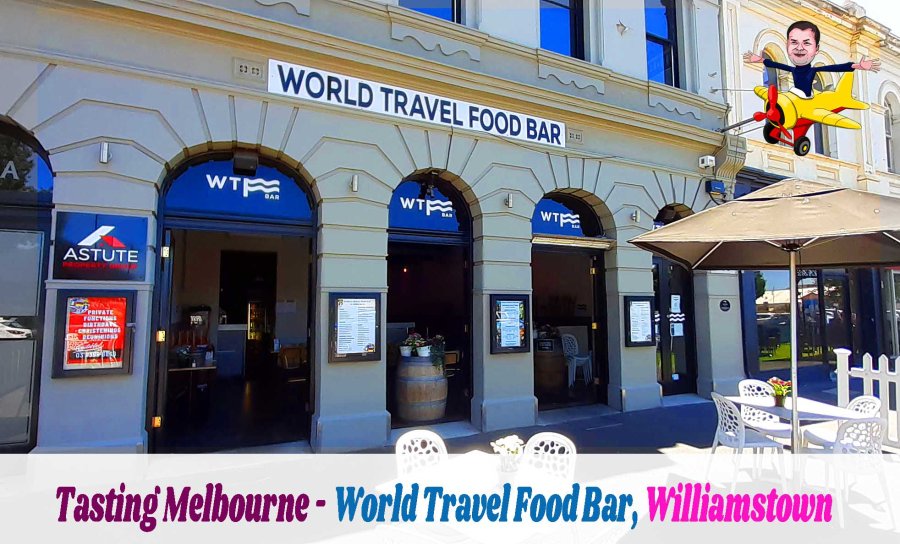 Howdy all, today another review for the foodies out there from destination Melbourne. It was a while ago now I happened to lunch at the World Travel Food Bar in Williamstown, a beautiful suburb in the west of Melbourne with a lovely waterfront and more. It’s a really cool place and one which has seen house prices skyrocket in the last 20 – 25 years and now buzzes and attracts people on the weekends in large numbers to hang out. There’s also a pretty nice and very popular beach not so far from the centre of everything.

Nelson Place is one of the main drags between the waterfront and the shops, and it is lined with restaurants. Hard to know with no preplanning which one to go in and try. So I don’t know particularly why it was that I wanted to try the World Travel Food Bar, which on its website declares it ’The World on a Plate’, but I thought I would give it a go.

Not a busy place, but in general the restaurants weren’t full at the time but there was only a couple of tables occupied. Outside the area along the footpath (sidewalk) had been adjusted to allow the businesses to use it for outdoor dining. A couple of places had closed down and were empty which was sad. The extending onto the footpath is a Covid thing. Parking wasn’t easy and I had parked a good five hundred plus metres from the restaurant (not that I knew where I was going when I parked the car). That’s the way on a weekend day in Williamstown.

Okay so the first thing you notice with the ‘World Travel Food’ Bar is that it shortens itself to ‘WTF Bar’. So yeah, I presume it’s all quite deliberate. I sat down and looked at the menu, and well, you know, it is not ‘The World on a Plate’. It’s actually not a huge menu. And despite the posters with presumably every flag of a country in the world on the wall, I don’t think they covered the gamut of places very effectively.

They did cover Greek and Balkan food. And perhaps Turkish. Cevapi and calamari were big on the menu, and I opted for the mixed kebab which included chicken, lamb and a lamb shish kebab. I expected maybe to see curries and a mix of other things there, maybe some Chinese food, but you can see the menu wasn’t really a stretch. It did have a special parmigiana on it which had bacon, and I think that was the Aussie inclusion. I nearly got it but thought it was more logical to have something that maybe suited the type of place they seemed to be. Which was a little unclear I must admit! However, I was glad in a way they didn’t try to extend themselves and cover loads of different cuisines because you might find they failed at all!

So. The servings were generous and the pricing of around $26 on the whole for a main dish was reasonable. The service was variable. One girl who served us was great but a guy there possibly a manager or owner appeared grumpy and short with answers to vital questions like ‘where is the toilet’. Guy behind the bar – and it seems to be a bar first and restaurant second – was friendly. People on the outside tables sitting in the sun enjoying a drinking, the way it’s meant to be!

So anyways, the food was okay. Not too bad, the salad was dressed with a dressing that could have eased up in the salt department. Otherwise, no complaints. My friend had the mains calamari and she was happy with it although surprised it wasn’t in rings, which I think a lot of people expect which frankly, they shouldn’t.

I would like to see the place at night and see if it’s pumping. It seems to have ridden the pandemic out so far, and although I wasn’t mad about the food it seems an interesting place perhaps not quite sure of what it is. There are a lot of eateries in that strip of Williamstown alone and I’m not sure I would say try this place first. I’ll be back at Williamstown soonish with another review I suspect, so keep an eye out for that one!

Thanks for popping by today, take care, and May the Journey Never End!