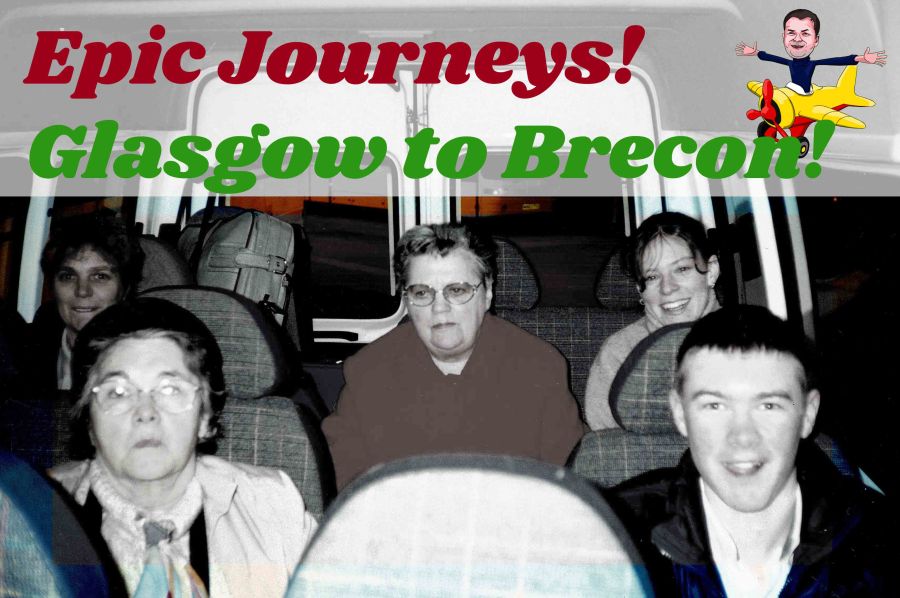 Howdy all. Well, as Christmas gets nearer I thought the appropriate thing to do would be to do an Epic Journey that was done close to Christmas time. I have been away for three Christmases I think, although two of them were when I was living in Japan. The other time, the first Christmas I spent overseas, was way back in the year 2000.

I was travelling for around 7 weeks, visiting Cambodia, India and in between them, the United Kingdom, where I would be at Christmas time. I thought about it, and I decided what I wanted was the chance to experience my first ever ‘white Christmas’, you know, the sort that Bing Crosby often dreamt about. So the thing to do was to spend it, I thought, in the north, and I settled on Glasgow.

I arrived on either the 23rd or 24th of December. No snow. Flipping cold but no snow. I was pretty disappointed. I met a couple of girls from the States at the hostel I was staying at, and we headed out to evening mass on the 24th. As we walked back to the hostel, the snow started to fall ever so gently! I had my white (ish) Christmas! The 25th also saw light snow fall, it didn’t really cover much of the ground, but it was a White Christmas. We headed to a pub for a few drinks and hung out with the locals. I found a pink telephone box somewhere in central Glasgow which was cool.

The 26th, Boxing Day, came around and it was time to leave Glasgow. This was to be a trip and a half. I had decided to save money and go with buses on this trip, and I had a National Express bus pass so all I had to do was turn up at the bus station and get on I think.

The destination was in another country, through a third. I was in Scotland, heading to Wales though England, the final destination was a village called Brecon. I was leaving mid-morning, probably around 9am, and had a change in Birmingham. Every time I go to the UK I seem to end up changing buses or trains in Birmingham. That bus station there was big and full of fumes, dark, not very inviting yet I got to know it pretty well.

The first bus was more or less on time, which was a good start, and soon we were on our way to Birmingham down one of England’s expressways, two lanes each way etc. Light snow occasionally, cold outside, but not too bad. It might have been an earlier bus as we stopped for a breakfast stop an hour or two out of Glasgow. The spread was pretty impressive, I LOVE a hot English breakfast with eggs, bacon, sausages and more!

It was as we started to get closer to Birmingham that the issues began. I guess it was Boxing Day and people were off to see people or take a holiday now that Christmas was done. The traffic was gridlocked, and gridlocked for a long time. I had a connection to make, I had maybe as much as two hours to make that connection in Birmingham, but I watched and waited as we didn’t move and that time was quickly eroded. We had news that one of the issues was the weather in the south, where we were headed, was turning bad and there was snow. Not that we saw it on that bus.

Eventually we did get into Birmingham but it was at least 30 minutes too late for the connection. It was late afternoon, and it was dark because at that time of the year the sun went down by as early as 3pm in the UK. I had never seen anything like it to be honest!

So anyways it was chaos in Birmingham. Buses were cancelled and there was massive traffic disruptions across the whole of the UK, especially in the south. I waited at least two hours whilst National Express worked out what they were going to do with hundreds of stranded passengers – Birmingham being a place where lots of people had connections.

In the end I was piled into this minibus heading for Wales. I still remember talking to people about going to Brecon, and they honestly appeared to have never heard of the place. Even a couple of Welsh people! ‘Brecon? BRECON” Where’s that then?’

This minibus had to go all over the place, not in a straight line at all, because it had a collection of passengers heading to all sorts of locations in Wales. It left after 6pm. And we were off. It soon became clear just what was holding traffic up, it was snowing and snowing HARD! Now THIS was a White Christmas lol!

It meant we couldn’t go fast, it was dark, at times it was a little scary because I had never been on the road in snow before. We dropped people off and you guess it, I was last! I was with a nice older lady, and time was getting on. She was the second to last person on the bus, and offered for me to stay with her and her husband. I took up the option. By this time is was basically midnight by the way, at least 6 hours later than the supposed time I would get into Brecon. I woke the next day and the land was what as white could be.

Why was I heading to this part of the country. Well… there was a girl. And it was a different town she lived in NEAR Brecon, where I went the next day. More to the point, I never actually got to BRECON, which I have to say is a very funny way for this story to end.

The journey was probably around 400 miles, or around 640 kilometres, but took three quarters of the day. If I do have a moral to my story, it would probably be that trains a better than buses and especially so in the UK. However, I did get to see some beautiful snow, and to me at the time, it was quite magical!

Thanks for reading today, take care wherever you may be, and May the Journey Never End!