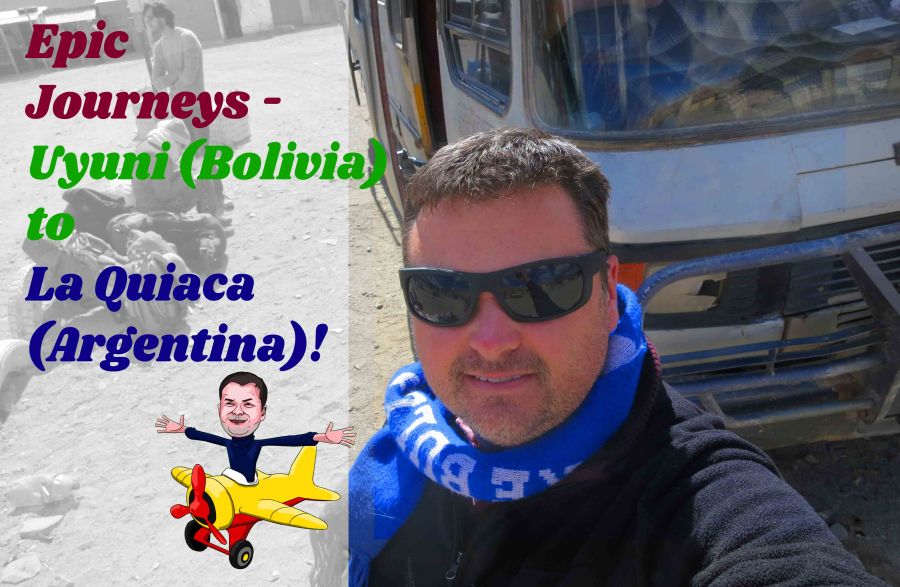 Howdy all hope this post finds you well, as well as you can be I guess these days! Today I want to write about a journey I had that was pretty ‘epic’. I use the word epic mostly because it’s a more appealing word than ‘long’ I guess, and when you travel long distances enough, you’re going to end up having some very long journeys indeed. Such as the one from the town of Uyuni in Bolivia, the gateway to Salar de Uyuni, to the border town of La Quiaca, in Argentina, passing through such not-particularly-known towns as Atocha, Tupiza and Villazon (the border town on the Bolivian side).

Now, I just googled searched this route and it says it’s only 288 lousy kilometres and should take around 4 hours and 40 minutes. Well, perhaps if you have a Land Rover and you don’t stop and if they’ve sealed the stretch from Atocha to Tupiza, perhaps. I can only presume that they HAVE sealed the road since I was there, it was four years ago now, because there were works on that road in some spots that I remember passing. For me, it was a journey that took most of the day, leaving at 6am and crossing the border some time between four and five pm. La Quiaca is actually right on the border, so basically once you cross it, you’re there. And I actually walked to the hostal from the border.

The terrain is rugged, dry and mountainous. There’s a lot of sand, it’s cold and windy, and to do it on public transport is challenging because you can’t be sure of connections.

Uyuni is where I started, and after I returned from my tour of the Salar de Uyuni [see – A Tour of Salar de Uyuni] I booked a ticket to Tupiza, the largest town/city in Bolivia’s far south with a company called ’11 de Julio’. For some reason companies named after dates – presumably significant, or perhaps the date the company opened (?) in some way – and this was just an example of this. As the journey went ahead for example, I had to get a new ticket for the Atocha to Tupiza section of the journey, and the company for that leg was called ’12 de Octubre’.

I woke up on the day just after five am, just before the alarm was due to go off. Somehow I seem to manage waking up minutes before my alarm regularly.

a brisk cold walk to the bus area and I found the bus. It was a smaller bus than I expected, looked worse for wear on the outside somewhat better on the inside. A Belgian couple on the way to Tupiza as well the only tourists on the bus apart from me. We left pretty much on time and all I really remember is falling in and out of sleep. I woke to find us stopping at a Atocha – a small dusty town surrounded very closely by mountains.

It turned out we needed to change buses and were issued a new tickets. Waited until 10:00 AM from 8:30 to hop on a bigger bus – not the nicest but hey what you gonna do? The road was unsealed all the way to Tupiza. The bus driver was crazy I thought we were going to roll over several times it also had to stop twice to apparently refill the radiator with water! We were atop the mountains for most of the journey not many living out there. Wow. Wish the window wasn’t so dirty.

We did make it to Tupiza before 2:00 PM – which I was amazed at that bus had some bad sound happening too. Tupiza is in a little valley, not up to much.

The first part of the journey I really slept through and didn’t wake properly until arriving in Atocha. I had no idea that we had to change buses, get a new ticket and wait there at all, so I was a little confused but in the end it worked out. The ride from Atocha to Tupiza was the incredible one, at times there appeared to be no road at all. I would look out of my dirty window and see that we were driving along a dry river bed. I kid you not. I think somewhere the real road was getting repaired or built or something. There was barely a soul out there and it was so high in the mountains and a mistake by the driver and we would have rolled down a valley and never have been seen again. I remember being in genuine fear of this happening too. My goodness me just making it to Tupiza was a massive relief!

Back to the diary –

I was lucky again as there was a mini bus to Villazon about to go he 5 minutes later and we were on our way this time a good paved Rd all the way to Villazon. Another crazy driver! Lonely Planet gave estimates of 2 1/2 to 3 hours or 1 1/2 hour In the reverse direction (Villazon to TYupiza). Things flattened out a little bit and we were there in just over an hour! Passed a policeman with radar just sort of resting, if he was active our driver would have been in big trouble!

Took a quick taxi to the border (with Argentina). Villazon gets a bad Lonely Planet write up but it didn’t seem too bad to me better than La Quiaca I’d say.

Border crossing – stamping stamp out bag x-ray, 5 to 6 minutes tops, no migration card for Argentina hope they weren’t supposed to give me one!

So yeah the road was much better, and the driver of our mini-bus was super-fast, equals super insane but yet not as bad as the previous bus driver! It was a prettier driver along a sort of valley, curvy road for much of it. I could have had to wait a couple of hours in Tupiza, but I was so fortunate that this mini-bus was full and ready to go as the bus from Atocha pulled into the bus station, I just somehow found myself on the way to the border before I knew it.

Villazon, the Bolivian border town, is bigger than I was expecting and didn’t seem too bad. The border is over this bridge, and there are a lot of little shops in this strange street that leads up to the border in Villazon. It was really quiet and a little eerie on that day. I was able to change some Bolivianos to Pesos at a little shop, I think the rate was okay, and the border formalities were almost non-existent.

I had worried that this border might be tricky in some way, or at least tedious, but it was neither. There was a line of people waiting at an office door filling in forms (For Argentina I think) and I thought initially I would need to line up there too, but as it turned out I asked a guard who took me to the booth and I was stamped in – after paying the $100USD reciprocity fee for Australians (which I believe is now waived) – put my backpack through this x-ray machine and walked into Argentina over the bridge.

La Quiaca was very dusty too. Unlike the Bolivian side there wasn’t much in the way of shops or people on the street looking to exchange your money, which was a little strange.

Finally though, from the diary again –

I walked to the bus station and got a ticket to Salta 8:50 AM tomorrow then a quick supermercado stop, and now I’m here doing the diary.

So yeah, La Quiaca small enough that I walked to the Hostal Copacabana. It was okay actually, but shared toilet wasn’t great because during the night it absolutely pelted down, and I think the power went out too. I went to a nice hotel for dinner where I wrote the diary entry the excerpts I’ve used today came from. The rain actually was a complete surprise, it was such a dry area it was the last thing I expected.

All in all I left Uyuni at 6am, and crossed the border probably around 4 – 5pm. The was a one-hour time difference so I would have lost that hour. So if I crossed at 4pm, in Argentina it would have been 5pm.

It’s s trip that has stayed in my mind for four years now, mostly because of the bizarre landscape and conditions that this old, large, battered bus drove in by a driver who didn’t seem to care too much if there was more damage done to the bus. This is overland travel by public transport for you though in South America, and one thing it is for sure, is an ADVENTURE. Remember – it is all about the journey.

A small room in a hostal on the border was my refuge for the night, with another bus journey ahead of me the next day to Salta, but the roads were much improved, the bus more comfortable and no changes were necessary. It was quite the contrast!

Thanks for joining me today on my journey down memory lane as it were! May the Journey Never End!