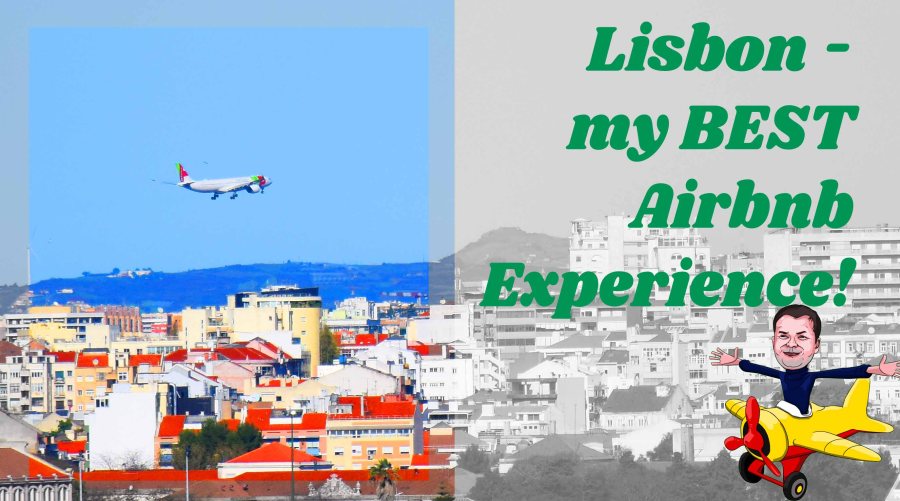 Howdy all, and today I’m going to review our stay in Lisbon, Portugal last year. Whereas we’d been sticking to hotels up until hitting the Portuguese capital, in this instance we decided to give Air BnB another go. I’d sworn off them a little – not completely – owing to a couple of experiences we’d had which I had felt just weren’t up to scratch, and to be honest I really enjoy the hotel experience. But as we had six nights in Lisbon and we wanted to keep costs down whilst we were there, well, we went with an Air BnB, an apartment to ourselves, and this experience was easily the most positive one we’ve had doing Air BnB thus far.

Now I should talk about previous experiences here, and point out that they haven’t been overwhelmingly negative at all. The apartments have been smaller than I would have liked (I’m specifically talking about London and Paris) and the Paris one was insufferably hot and had wifi issues (basically didn’t work for the last few days) and there were issues in London with the power going out as the owners hadn’t topped up the meter. The size is not my fault, and in the end we left vaguely positive reviews on both because we didn’t want to start a dispute, but really for the price we paid we could have had a hotel room of at least three stars. No cooking and probably not as much space, no laundry facilities, but air conditioning, room service and a point of contact that well, was easy to contact because contacting our hosts, especially in Paris became a real challenge.

Anyways, enough of bad experiences, and forwards to the most recent one, in Lisbon last year 2019. Because this was far more positive by a very long way! What was really interesting was to see the way that Air BnB had developed as a platform in terms of its users since 2017, when I had last used it, all the places I seemed to find were individuals with an apartment they owned renting it out to others, or rooms in their home where you shared facilities with the owners.

This time I noticed that a lot of people have now really taken to Air BnB to use it as a platform for a business. Some have multiple properties to rent out, others have apartments connected with travel businesses which offer travel services from visas to tours, and even apartment rental agencies now use the platform to connect with potential customers. In some ways it’s great – it means there are even more options, but on the flip side it’s now deviating from what I (at least) felt the original concept was, and that more about connecting people across the globe. Cultural exchange for example was part and parcel of the idea of sleeping in a room in someone’s flat, and my previous best experiences with Air BnB were in South America in 2016 using it this way.

And that wasn’t what Lisbon was about, but it doesn’t mean we weren’t happy. If you have your own private apartment to yourself, you want it to be comfortable, well positioned, with the facilities you’d need such as ability to cook and wash your clothes, and that things run smoothly whilst you are there without issues. For example – the WIFI is and remains reliable during your stay.

And this place ticked all the boxes. It was run by Sarah and Pedro, who had a little tour agency not far at all from the apartment. It was in the Alfama district, on the big hill that leads t0 the Castelo de San Jorge (Saint George), and the famous number 28 tourist tram ran right past the place – for more on this amazing tram ride, check HERE – Lisbon’s Number 28 Tram.

The apartment was sort of the back apartment of a building with a café out the front, along with a convenience store, and it was a 10-minute walk or a little more to a decent supermarket, albeit a walk uphill which didn’t agree all that much with me I must confess. The number 28 tram took you right into the middle of the city, and despite all the winding streets, it wasn’t that hard to find (in direct contrast to the hotel we stayed in Seville – Las Casas de Los Mercaderes.

The hosts offered a pickup at the airport, which we took. We stopped on a hill for view of the city, and we could see the planes coming in to land which was pretty special all told. It’s a beautiful city, and we had great weather for the six days we were there, the air was so clear! We left our bags at their office and made our way to the castle until after lunch, as we arrived at 730am and there were people leaving that day and they needed time after checkout to clean the place.

It was a bit of a trick opening the front door to the road, then down a thin corridor and up some steps to our apartment. Although I’d chosen carefully, I wasn’t sure 100% what I would find behind that apartment door, but for once the photos on a website seemed to match what was inside. A nice living area, couch, table, TV, a small but functional kitchen, master bedroom with a large bed and a second bedroom up some stairs with two single beds in case one of us (I’ll let you guess) snored. Two bathrooms was great too as we could have one each, which believe me is not a bad thing. 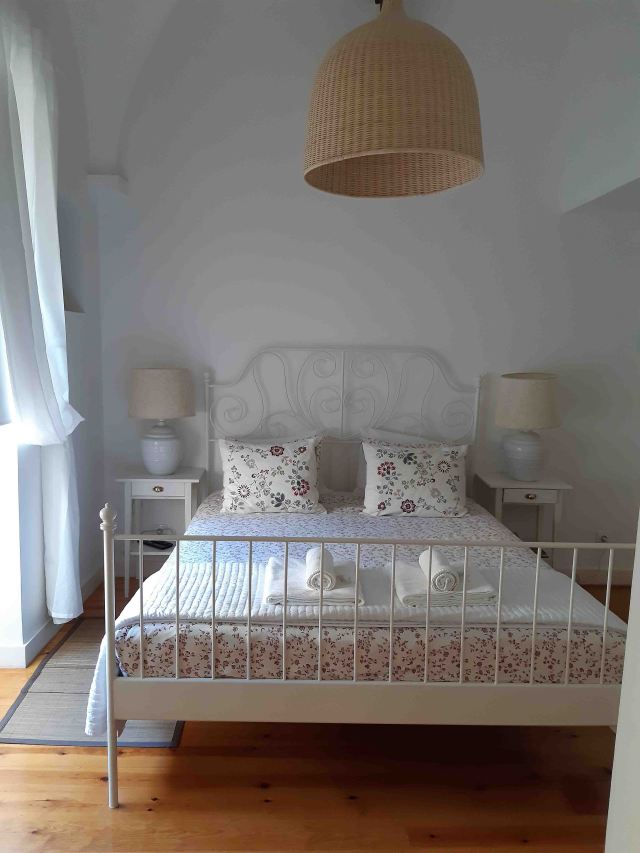 It was clean and well appointed, the WiFi was good and hassle free, and we were very comfortable for the time we were there. I paid around $880AUD for the six nights which is just under $150AUD a night, around $105USD, and for the space and location and comfort, it was definitely worth it. Also, Alfama can be a noisy place at night, music and parties tend to rage, but because the apartment was at the back of the building, it was quiet throughout day and night, and as we are two old fuddy-duddies, that suited us fine. I trawled through so many listings which were great, but people didn’t like the noise in Alfama, so to find one that was quiet was key for us. 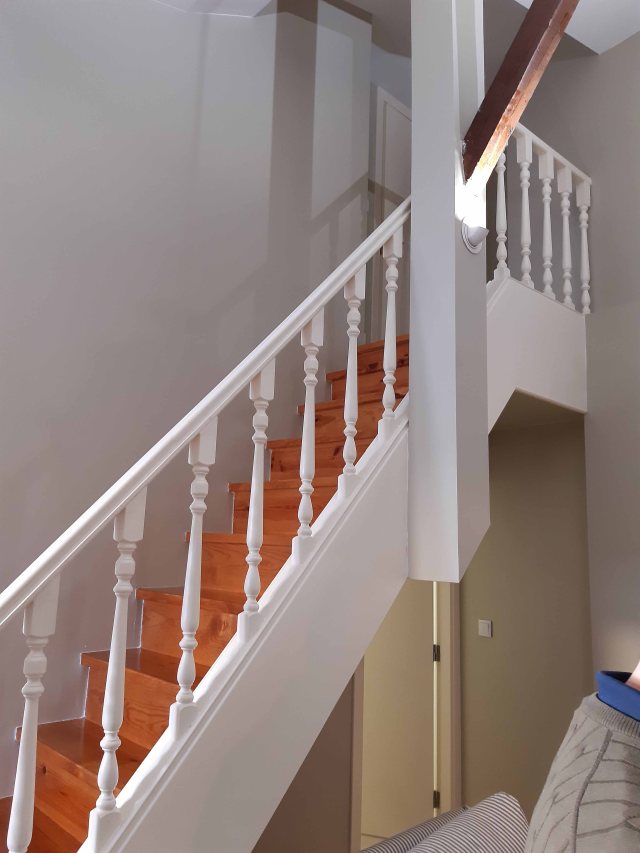 Anyways, we also did a day trip Sintra which our hosts organised. It was okay, friendly guy, a little miscommunication over how many were in our group, but otherwise nil issues. I had expected it might be the hosts who did the tours, but they sourced it to another company I think. Good price and Sintra is brilliant, not to be missed. Someone was always available if we needed them, but we didn’t. We did get a couple of follow ups to make sure everything was good, and the girl who picked us up from the airport gave us a lot of information and tips which was also great.

So there you go, this is how it should be done I guess! So impressed this time around. If you are interested in the place that we stayed, if it sounds like somewhere you’d like to stay when in Lisbon, here is the Air BnB link for you – Historic Apartment, Sao Jorge Castel, Lisbon.

Thanks for reading, May the Journey Never End!