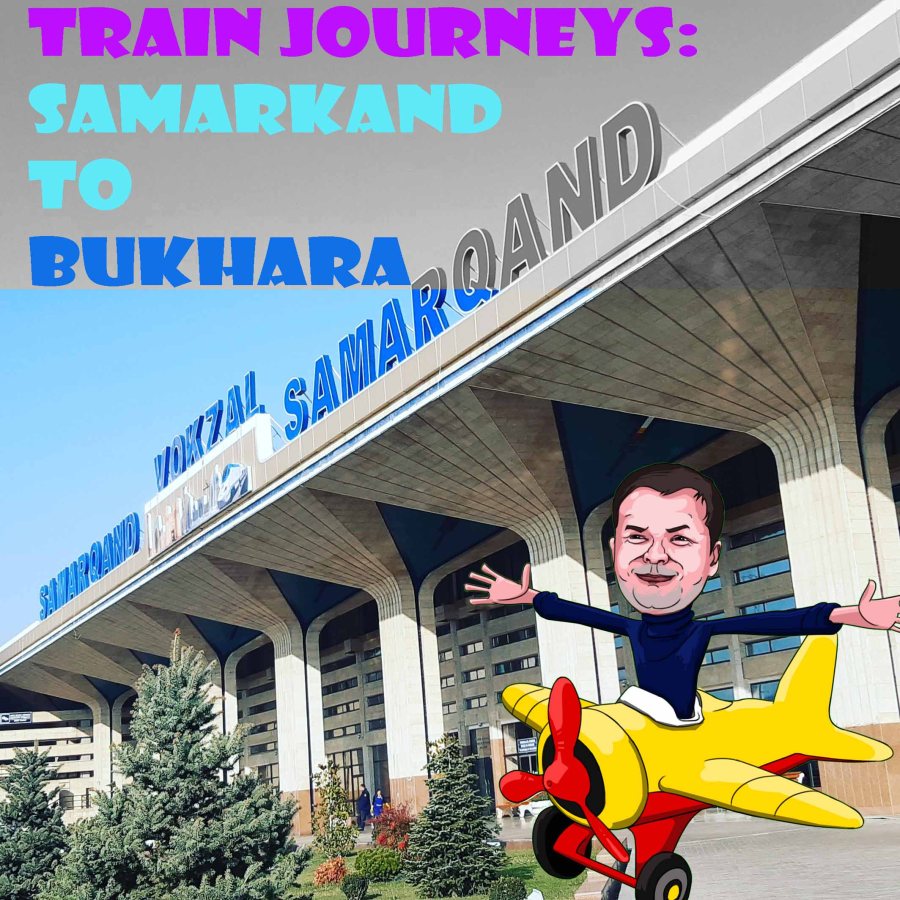 I’d taken this route before back in 2011. As part of the longer Tashkent to Bukhara – this whole journey was in May or June and it was 40 degrees outside. This was before the introduction of high speed rail to the Central Asian country of Uzbekistan.

The first high speed rail in Uzbekistan was completed in, as it turns out, 2011. It was from Tashkent to Samarkand. 344 kilometres which takes the train around two and a half hours to complete. The section from Samarkand to Bukhara was completed in 2016 covering a distance of 256 kilometres, which it completes in an hour and 12 minutes.

The train bought for the line from Europe was the Talgo, a superfast train seen in France and Belgium mainly, which can reach speeds of 250 km/h. Apparently they have proven so popular Uzbekistan have had to order more trains as they can be booked out months in advance. I luckily bought my ticket online well in advance, in fact I applied for it before bookings for my date were available so I was one of the first in line I guess. I used the brilliant web service ‘Carivanistan’ which was created by ex-pats with a love for Central Asia. They proved extremely useful last year in my organising of Central Asian adventures. They don’t run tours or book seats, they refer your request onto agencies in the region which respond to your needs.

Anyways, the seat was in what they called the ‘VIP’ section, and came at $35USD. There were two other classes, obviously cheaper but when I was quoted $35 I thought I might as well take it, not bad for top class over 250 kilometres.

I always worry with e-tickets that they will look at the ticket, look at me and ask me what I was showing them, but thankfully that is yet to happen to me! The station is a little way from the centre of Samarkand, I think it was about 20 minutes by taxi. I got to the station – a large, concrete structure with ‘Samarkand’ written across the top of the entrance and couldn’t help but notice there were hardly any people there or hanging around.

A bit of security, no ticket no entrance to the station. Inside the roof was high, there were a few people waiting inside, they seemed to only let you out on the platform when the train was ten minutes or less before the train arrives. Bags were x-rayed before you could get onto the platform. I asked where abouts my carriage was and pointed in the direction the train was coming from.

The train was more or less on time, and I hopped on. Someone was in my place and a big shuffle was needed – someone who wasn’t supposed to be in that carriage I think. Seats faced each other and reclined, very comfortable and a good size.

My previous train experience in Uzbekistan was very different. It was cheaper and much slower – over eleven hours from Samarkand to Bukhara. In a sauna! Loud TVs blared movies and whilst the first few hours were fine, by the end of it I was….let’s say a little ‘sweaty’ shall we? And partially cooked. 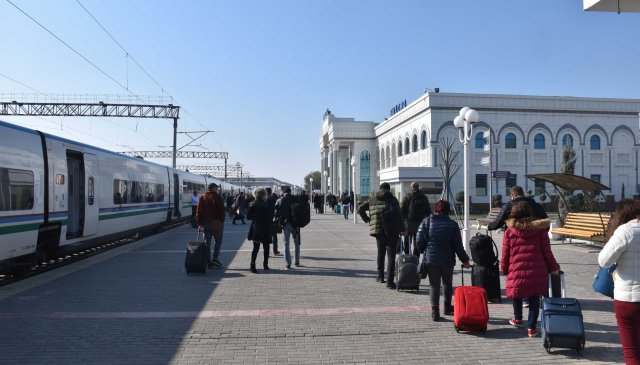 The new Talgo’s are brilliant, and make such a different in terms of time and comfort in Uzbekistan. The only criticism I have are the windows aren’t very clear which makes taking decent footage out of them impossible, but that’s because in the summer you need the insulation I presume. In November it keeps the heat in. Day temperatures are around 15-17 degrees at that time of year (that’s plus).

Look, you’re not with the everyday people I guess in this class, in fact almost everyone in this half a carriage as it was, was a foreigner. I did chat with a local business man though and he was very nice. There is a display which indicates how fast the train is going and I think it got to 238 km/h at it’s peak.

Honestly, it was so smooth and quick before I knew it, I was in Bukhara looking for my shared taxi to Khiva. I met some nice Americans on the carriage and they gave me a lift to the share taxi area which saved a fair bit of hassle, so it was all very nice.

And as for the journey that goes much faster and you see much less of, it’s mostly desert or desert-like surroundings. So there isn’t that much to miss. The trains in Uzbekistan these days are a revelation! I thoroughly enjoyed the trip, short as it was. Thanks for reading today – and May the Journey Never End!