Howdy all. So here’s the idea right. It’s self-isolation time for many of us. It’s minimising social interactions and going out. With Covid-19 or the Coronavirus if you prefer, staying home is a big thing right now. And one thing that it’s virtually impossible or at least highly advised against doing is travelling, particularly internationally. Here in Australia, our borders are closed to foreigners and good luck finding a flight out because there are so few at the moment. So this segment will be me showcasing places I’ve been, so you don’t have to go there yourself! Which you probably can’t do right now anyways.

And today I am starting with Mali. Mali has been in a bit of an unstable political situation for the last few years, maybe 8 or 10 years in fact. So even without the threat of COVID-19 Mali probably wouldn’t be on a lot of people’s travel lists. It’s a pity because it is probably the most rewarding country, in times of peace, to visit in West Africa.

It’s a completely landlocked country, bordering Senegal and Burkina Faso amongst others. I visited over ten years ago now and really enjoyed my time there, crossing from Burkina Faso to the Dogon Country, up to Mopti, to Djenne, Segou and flying out of the capital, Bamako. One of the most famous places I didn’t get to is Timbuktu – so if you’ve ever wondered where Timbuktu was, wonder no more!

Mali is a country which is quite an adventure to get around. I found myself on buses and bush-taxis (share-taxis) whilst on the ground. The first stop was Dogon Country, around the town of Bandiagara in the south-west of the country. Not too far from the border with Burkina Faso. The Dogon people live on the top of, below and around this escarpment, a sort of ridge that rises from the red ground. It’s a truly beautiful place, and the villages are dotted along and I walked, with guide and group, from one to the next over three days and two nights. At the end of the second day we actually ascended to the very top of the escarpment.

There was no electricity out there but there was rudimentary lighting provided by car batteries, and one of the nights my group slept on top of a mudbrick house, which is how all the houses and buildings are made here. We surveyed mostly unused houses sort of built into the cliff as we walked along. It was very hot there, in the middle of the day well above forty and so the standard approach for all groups was to walk for a few hours in the morning, by 11am you stop for a rest, lunch, and then after around 3pm you continue on. You get about five to six hours of walking a day I guess and bags etc were taken by vehicle or animal to the evening spot that we settled.

All in all it’s one of the more remote but astounding places in the world, although it feels a little like you are observing people’s lives for your own interest I guess in a way. But the kids were friendly and the travellers were welcomed happily, or at least so it seemed.

And then to Mopti

From there onwards I travelled on to the town on Mopti, on the banks of the Niger and Bani Rivers – right on the confluence. It’s a breezy town, a bustling spot on the river. It has a district that felt very colonial, the highlight was simply taking a boat out on the river and to the islands in the middle, then watching the sun set from the river. 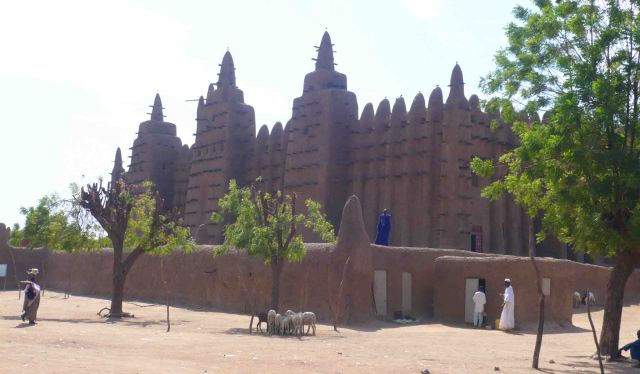 From there a day trip was taken to the town of Djenne, on an island in the middle of the river Bani. It’s accessed by a sort of car barge that gets you over there, no bridge to be had. It’s an amazing town, almost entirely mudbrick with the famous Djenne mosque somewhere near the centre. Just exploring its streets is a brilliant way to spend the afternoon!

Southward to Segou. Another town on the river, quite pretty in its way, and then to the capital Bamako. A bustling West African city with some interesting markets – quite crazy in parts, a little overwhelming in some ways.

From Mopti to Bamako it was all by bus, big buses, one that broke down outside Bamako and I had to hitch into town in a truck. From Mopti to Djenne (return) I was in a group of four and we hired a taxi.

Now is not the time to visit anywhere, but even if things were different re: Covid-19, Mali has been politically unstable for some time now and quite of the country is not considered safe for travel. But one day I hope all that would like to can visit Mali, because it really offers a lot. It’s not on the beaten tourist path, but that makes it more of an adventure.

I have a couple of videos from Mali too which are worth taking a look at!

Thanks for stopping by. Hope you are well wherever you are in the world right now, take care and May the Journey Never End!