Not to be deterred by blurring vision, I have again jumped into the VLOG mire and produced this one, a shorter one than last time, about packing.

I’ve been really good this time. I actually started packing a couple of weeks before leaving instead of, you know, well a few days before. I never leave it until the night before, I’m too… what’s the word? Hmmmm. Anyways, this time I’ve done things a little differently and I wanted to share my packing experience.

Now, I want to start by talking about ‘packing cells’ or as some call them ‘packing pods’ depending on what lace you buy them from. I was in Kathmandu, which for those who don’t know is a store specialising in backpacks and hiking gear. They have a lot of good stuff, however, their prices are generally way over the top. It’s quite frustrating really, I just don’t see the justification (other than making money) for some of their prices.

With there loyalty program the ‘Summit Club’, you get a sizable discount. 20% or more, but it still comes out expensive. I was looking for thermals and a warm jacket, and I found what I needed, but I also saw the packing cells on the self. I haven’t used them before, but I had seen on another travel blog someone who had given them a go and really liked them. And I remember thinking ‘meh, what’s the point?’ 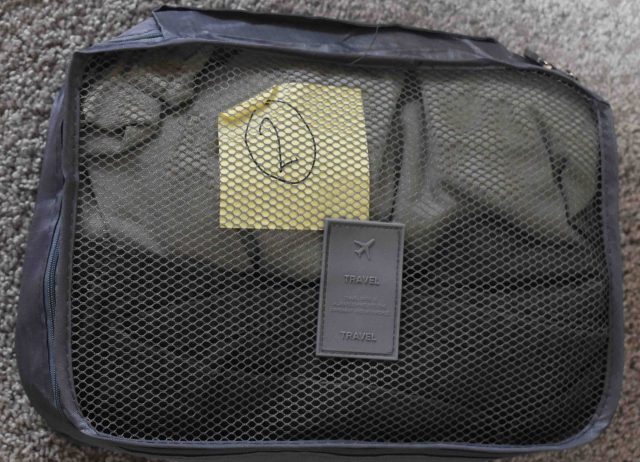 The point is, now that I was actually considering them, is that you can pack everything up in its own compartment and you don’t open your bag to find a mess and then pull everything out looking for it. Well, I am guessing that’s what the point is! Despite the price I bought a couple, I thought I would try it out. More to the point, I obviously impulse buy!

I decided later after thinking about it that I would get more if I could, but not for Kathmandu prices! I went online and found a pack of six for around 10-11 bucks Australian! Which was less than half of what I’d paid for the large packing cell, which was heavily discounted any way! They seem alright but I suspect won’t last particularly long. And only three are proper ‘cells’, the other three are ‘pouches’. Your standard packing cell has this sort of mesh at the front allowing you to see what’s inside. I then planned out what I was going to use each one for, and realised I’d need another. I recently complete a bunch of online surveys and as a reward I had $40 in Kathmandu evouchers, so I used them online and got a head torch for ten bucks as well!

I like the look of them, and they logical and like things are going to be significantly easier, but the proof of any pudding is in the tasting!

Then I wanted to address an issue from my last journey – that is shampoo spillage. Despite the little bottles for travel supposedly being for travel, I find that the pressure on the plane or the weight it too much and they leak. And somehow the shampoo gets out of the ziplock bag. This time I have a couple of bottles, small ones that originally came with shampoo, so we will see. Actually, Chemist Warehouse here was selling a number of delightfully small bottle of shampoo and mouth wash, for $0.99 to $2.99. I grabbed some bottles of Colgate Plax. I like Listerine, but hate Colgate Plax, so I emptied and cleaned the bottle and used a funnel to put in the Listerine. I have found regular mouth rinsing keeps the number of bugs I catch down, and I suppose it’s good for your teeth too!

I always raise the thought of taking my sleeping bag, and I’m still thinking about it this time. Even with the sleeping bag compressor – a great invention that allows you to squeeze the sleeping bag up to around half the size it would normally be rolled up, it takes up a chunk of room and it will always be the single heaviest item in my backpack. I’m thinking to leave it at home this time, but I worry that at times in Tajikistan where it’s cold I may want it at homestays.

I have a sleeping bag inner sort of thing, just a thin sheet like sleeping bag which I will take, and use with the local blankets, but I don’t know if that will suffice. The real issue is that I am unlikely to need a sleeping bag once I leave Tajikistan, which is the first proper stop of the trip! So it’s unlikely I will end up bringing it.

I bring a cavalcade of medication – for hayfeeder, sick stomach, as well as Imodium for you know what, epipen in case I have peanuts, band aids, a bandage, disinfectant, hand sanitizer, toothbrush, toothpaste, I’ve even switched over to a blade shave as I find electric razors so unreliable. And probably the weight is less but then I need a tube of shaving gel, so I guess it’s not! One pair of boots, one pair of sandals, a light travel towel that I rarely use but it doesn’t take up much room so it’s easy enough to bring.

But still the problem of weight remains. Although not with my checked luggage – I am talking hand luggage here. If I want to take this laptop, which I do, it immediately becomes heavy and then I add my camera. Add a book and depending on its size we are already at 5kg. But I would never put my camera or laptop in my checked luggage.

I bring plenty of USB sticks as well, and operate DropBox as a further backup to my photos – which often takes an awful long time to upload of an evening!

When I write it all out like that, well, it seems like an awful long packing list. And they say you only need tickets, money & passport. And I suppose, essentially that’s true! But I do think having a certain place for all these different things will be a benefit for me. And as I said, here’s a little VLOG for you :

Thanks for stopping by. Are you as ridiculous a packer as I am? Please do comment below – and May the Journey Never End!