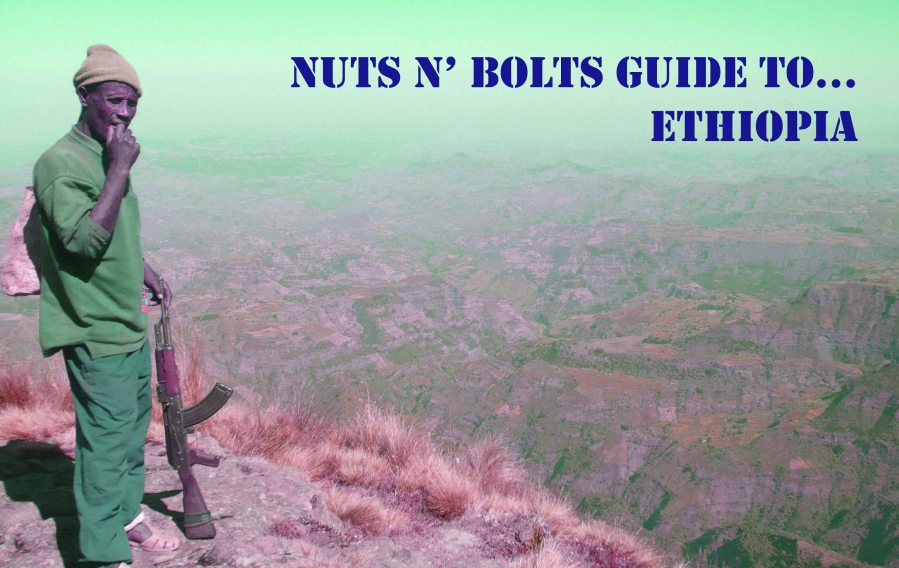 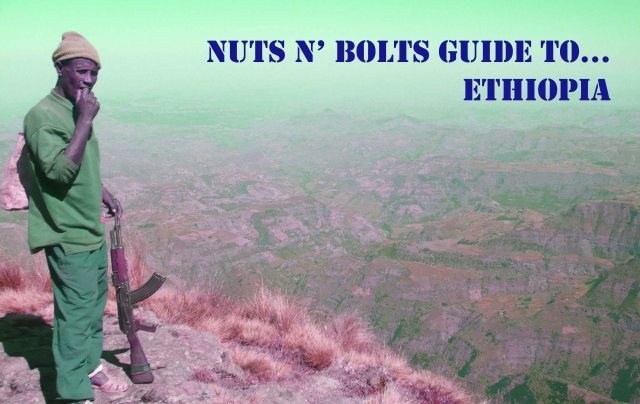 So. You want to go to Ethiopia? You don’t? Let me tell you – you’re missing out. Ethiopia is a thoroughly rewarding and consistently mind-blowing country to visit. It’s a large country in an area known as the ‘Horn of Africa’, bordering Kenya, South Sudan, Sudan, Djibouti, Eritrea, Somalia and Somaliland. I think I got all of them. And despite its association with poverty and famine, especially in the 1980s, Ethiopia is a country with so much for the traveller.

What surprises people who don’t know all that much about Ethiopia is that it’s a very mountainous country. The northern section from Addis Ababa upwards is at altitude, and then the south is tropical and to the east of the country it is desert like. In fact, for one of the generally highest countries on the continent, it is also the lowest, with the Danakil Depression one of the sites tourists visit if in the country.

Ethiopia is a country of two main religions. Christianity has been a part of Ethiopian culture and life for nearly two thousand years now, and it boasts one of the world’s oldest relationships with the religion. Ethiopian Orthodoxy is its own branch of Christianity and is responsible for many places to visit, especially in the country’s north. This includes the incredible rock-hewn churches of Lalibela, centuries old and a UNESCO world heritage site. In other parts of the country, especially to the east, Islam is the dominant religion. Of the 105 million who live in Ethiopia, 64% are Christian and 34% are Muslim.

Flying in and out of Addis Ababa is your only real international option. I flew in and out with Emirates, but Ethiopian Airlines have one of the biggest fleets in Africa and generally seem to be regarded as Africa’s second best airline behind South African Airlines. This means from Europe and some parts of Asia you can reach Addis Ababa without having to connect. Other airlines to fly to the Ethiopian capital include Lufthansa and Turkish Airlines.

You will probably need a tourist visa to visit Ethiopia. They are not so hard to get, and Australia has a consulate which made it super easy for me. Just a form and couple of photos, and of course a fee. In great news, Ethiopia is another country which has moved to e-visas, costing $52US for a 30-day visa, longer ones are available.

The local currency is the birr, and at the moment 1USD is the equivalent of around 29 Birr. This represents a fair change as it was more like 8 – 10 Birr to the USD back in 2009.

The capital is an interesting place and certainly has a very unique feel unlike any I’ve experienced in an African capital. It’s very hilly, and at 2355 metres I believe is the highest capital on the continent. Ethiopia is located just above the equator which cuts through Kenya, and so the parts which are not so high can be pretty warm, but the capital seems to see days of around 18 to 25 degrees, and there isn’t a huge chance depending on the time of the year. 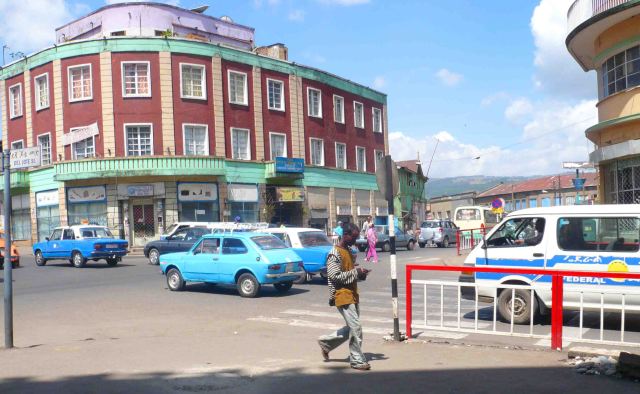 I went in November (2009) and it was around 18 degrees each day, and wherever I went in Ethiopia it was nearly always clear. So nights got pretty chilly. There’s a nice vibe in Addis Ababa and people were generally friendly. Met some locals and had a few beers. Also a great museum and a few monuments as well. Not the world’s most exciting city, but interesting enough for a few days.

Once you’re done in Addis Ababa there are so many places to visit in Ethiopia. For me, I stuck to the north, but I believe the south is interesting and the east has the Danakil Depression. The simple fact is that Ethiopia is not a flat country, and ground transport varies in quality and reliability, and at the end of the day it really can take a very long time to get from one place to another even though on the map they look very close.

So when I was there – I travelled with two friends – I mixed in a bit of air transport, which honestly is the way to go unless you fancy taking two days in a cramped minivan to get from Addis Ababa to Lalibela. We flew and it took an hour and a half. Maybe less.

Buses do run many routes and are very cheap, but flying is not expensive and if you have the money it will save you the time. We bussed from Bahir Dar to Addis Ababa on a VIP bus which was ok, and took a number of local buses around the Gondar/Debark area and down to Bahir Dar. They were less comfortable, we were sharing with a lot of people and chickens, but you know, it was a real experience and not one I regret! Ethiopian Airlines have a pretty comprehensive network of domestic flights.

If you’re taking in the north, then you’ll probably want to get to the rock-hewn churches of Lalibela. They are nearly 1000 years old, and there are I think seven main churches in the town of Lalibela, which stretches over the mountains in the middle of the country. It’s really beautiful there and the airport is tiny and kind of cool.

The churches themselves are actually carved into the rock, rather than having been constructed which must have been an amazing feat back in the 11th century. You get one ticket for three days I think it was and you are free to explore, but most people get a guide because there’s an awful lot of information to be given. The priests will pose for you, with sun glasses on as they spend their days in the churches and rarely see sunlight. They will expect a small payment.

I flew from Lalibela to Gondar as well as from Addis to Lalibela. Gondar is pleasant enough, quite cool with a large castle as its main feature along with its market. There are a number of other sites easily done in a day tour around the area including these holy baths where people get baptised once a year and a monastery on a mountain with stunning views.

This town is at under 2000 metres and was the lowest town I visited when I was in Ethiopia. It’s on the beautiful lake Tana, and the most popular thing for the visitor to do is to take a boat onto the lake and visit the Zege Peninsula. There you can visit a monastery and go for a very pleasant walk. Also near Bahir Dar are the Blue Niles Falls, which can be spectacular – as long as the river is flowing. Sometimes it isn’t depending on weather, season and if they shut off the dam upriver.

Debark and the Simien Mountains 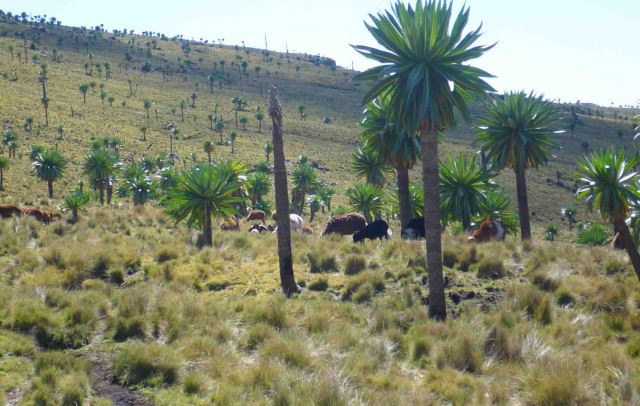 Probably the most challenging hike I’ve ever done, the Simien Mountains are beautiful and rewarding and probably my number one highlight in Ethiopia. You organise the experience from the town of Debark, a few hours by bus from Gondar. You need a guide, a guard, a cook, donkeys and donkey handlers. And who knows by now maybe someone else too! But if you’re in a group you’ll find it very affordable.

We hiked up to a height of around or just over 4000 metres, and I suffered briefly from altitude sickness. It lasted about 12-14 hours, and then well, I vomited, and I was fine. Very bizarre. The mountains are home to people, cattle, birds, gelada baboons and more!

And as I mentioned, there is plenty to see in the south of Ethiopia, which boasts a warmer climate and a lower altitude. Speaking of lower altitudes, the Danakil Depression as mentioned earlier is actually 125 metres below sea level and features volcanoes, hot springs and some brightly coloured earth! Best to get a tour there, I’m sure and I think they usually visit at night. The interweb claims that the Danakil Depression is the hottest place on Earth!

So, Ethiopia! I hope this post has piqued your interest because I certainly have very fond memories of visiting, and it is my favourite country in Sub-Saharan Africa! Please do comment below, and May the Journey Never End!