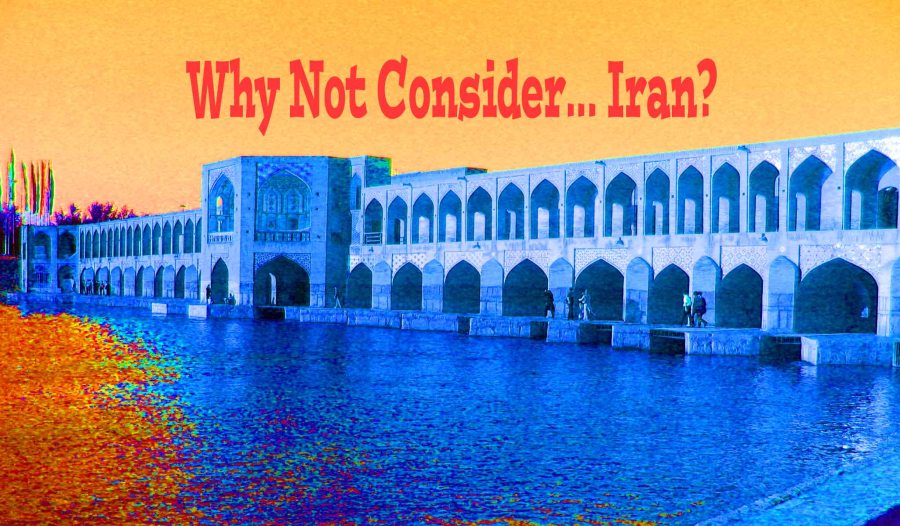 How many countries are actually on the conventional ‘tourist track’? Actually, probably most of the countries in the world if you think about it. If you told someone you were headed to Iran, presuming you were living in a “western” country, you would probably expect that who you told might be a bit surprised, perhaps even concerned.

Whilst some countries, Iran being one, seem to have an image of being dangerous for the visitor, this is certainly one country where that reputation is sorely misplaced. It doesn’t mean that nothing bad could happen to you in Iran, obviously bad things happen most places at some time, but I have never heard from a traveller who had a bad experience, or a dangerous one in Iran.

In fact, people there are so welcoming and kind, and so concerned for travellers, that your biggest worry may be over zealous caring. Which leads me to the next point.

Staying with a family

If you are lucky enough, and a surprisingly large number of visitors seem to be, you may find yourself invited to stay in a home with an Iranian family, probably from someone you just met. And they will probably treat you like you’re the most important person in the world, which was my experience. Your issue may be moving on when the time is right!

Transport is Cheap and Efficient

Buses are the main way to get around, although domestic airfare are also very cheap and there are a couple of trains, but I stuck to buses which were comfortable and clean, and the roads were well-maintained.

The People are Friendly and a Good at Foreign Languages

For a country that is somewhat cut off from the rest of the world, the Iranian people are very good at speaking other languages. You will generally be able to find someone who speaks English in your time of need. And even if you don’t find an English speaker, locals will go out of their way to help you and to work out what you need.

There’s no doubt that the sites of Iran will stun you. They are simply amazing. Just head to the Naqsh-E Jahan Square in Esfahan and enjoy the market and Shah Mosque, many you visit will have delicate mosaic work to admire. The sandstone structures are very beautiful and very peaceful.

But then there are the bridges across the Zayanderud, the largest river in central Iran, which runs through Esfahan. Walking along the banks of the river is a special experience in itself, a very social chance to meet and chat with the locals. And then the bridges, which are low, and beautiful, have cafes underneath where it’s a great pleasure to have tea and while away the time.

When in Esfahan I met a number of locals, some showed my friend and I around, to various mosques and an Armenian Monastery, as well as a somewhat dubious (but far from the worst I’ve seen) sort of zoo.

Equally as worth visiting as Esfahan, Shiraz hasn’t quite got the romance of Esfahan, but it does have plenty to see and do. It makes a great base to do a day trip out to Persepolis, an ancient city with a lot of Roman influences.

On the same trip you might stop at the Naqsh-E Rostram, giant tombs built into the cliffs in the middle of the desert. It’s certainly awe-inspiring.

Shiraz itself has plenty to keep you occupied including poets’ mausoleums, friendly people, some nearby hiking and more. I was invited to attend an English class and got to chat with some university students when I went to Iran, which was highly rewarding.

Yazd is a wonderful sandstone city, lots of fun to explore. A good leaping off point to visit a Zoroastrian temple in the desert – Chak Chak. It’s built into a mountain and you climb a bunch of stairs to get there, it’s still operating too.

Tabriz is a city in the north-east which is very pleasant indeed. Aside from a few temples and poet mausoleums in Tabriz, it’s the jumping off point to visit the village of Kandovan, where hollowed out dwellings in cliffs are all the go, and there’s some special spring water people flock to bottle as well.

Kerman is interesting too, and I’m not sure if the ancient city of Bam is worth visiting as it was mostly destroyed by an earthquake 15 years ago. I hear Mashad is a very beautiful and interesting place too in the north-west, and I haven’t visited the south coast but it would be worth taking a look down there if time permitted.

Then there is Tehran, which I didn’t really warm to as the capital, but many people do like it. There are museums, parks, cafes and more, and it’s surround by mountains so the view outward can be very pretty!

There are loads of reasons to visit Iran, the locals are just the friendliest, warmest and most caring people you can meet. There’s history, architecture, literary legends, warmth and friendship, good transport, ancient cities and temples – Iran is a fantastic place to go! So what are you waiting for?

Thanks for reading, and May the Journey Never End!

2 thoughts on “Why Not Consider… Iran?”