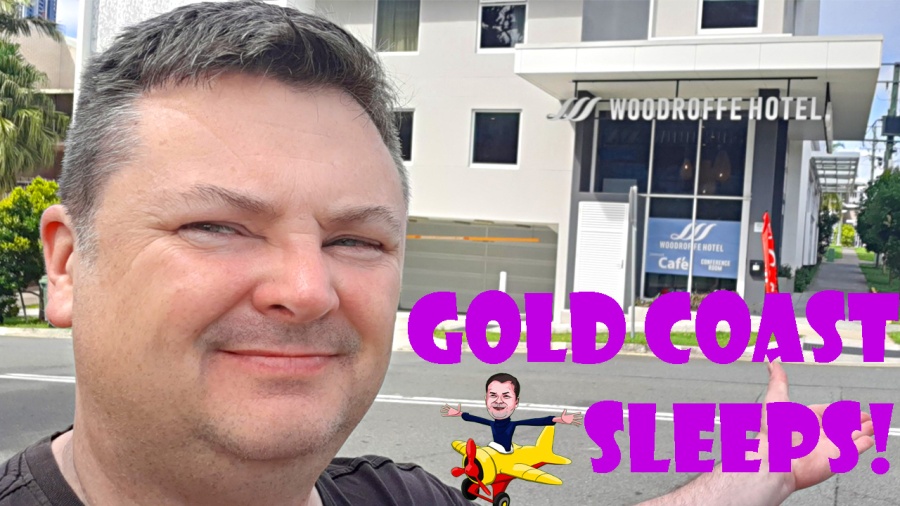 Howdy all and YES – it’s review time! And I am reviewing the last hotel I stayed at, back in April (has it really been fourth months since I got away?) and the place I chose to stay at was the Woodroffe Hotel in Southport.

The location wasn’t too bad although I probably would have preferred to have stayed in Surfers Paradise, where all the action is. However with the tram/light rail that plies the main Gold Coast drag all the way to Helensvale, staying a short distance away was not an issue and with a three minute or less walk to and from the tram, this hotel actually worked out pretty well as far as location goes. There were plenty of restaurants also within a short walk from the hotel, although the hotel itself was in a slightly quieter part of Southport which again, suited me fine. I was there by myself so I opted for take away which worked out well.

The cost of a twin room was $392AUD for three nights, so just over $130AUD a night, a little under $100USD. Considering it was the Easter long weekend and rooms were scarce and expensive, I was super happy with what I paid and what I got.

The place was especially clean, and it felt immediately like a smart Japanese Business Hotel. I discovered on my last day that indeed the hotel was Japanese owned and run, which made total sense. The room was a smallish room I guess, but for a business hotel certainly a decent size and the bathroom, albeit one without a bath, was a good size with a really nice hot shower.

Reception was friendly and helpful, and there was a café area where you could have breakfast which was provided – in my case at an extra cost though, not included in my price. I had bacon and eggs naturally! And it was less than $20AUD and cooked as I waited so very happy with that. Plenty of conference rooms and the like too on the ground floor.

As I said, the room was well appointed although my one criticism would have to be the set up with the TV over the small desk. A half decent work area is something you should be able to expect in a business hotel as people are no doubt working in general when they stay at one. But the TV, although raised, had wires everywhere and a set top box sort of half dangling and I only ever managed to get the local channels. It didn’t matter much, I was out each and every day, but if I needed a bit of a work area I wouldn’t have felt comfortable.

They offered a nice array of amenities in the bathroom too. Again, no bottles of water provided which is something common in Australia (them NOT being provided) and something I think would be a really good move.  There are vending machines at reception though for drinks and snacks, and a small empty fridge in the room, along with adequate closet space and I think an iron and board. And a safe too which I tend to use.

All in all, I can’t really fault this one. I was really happy here, incidentally booked through one of my preferred hotel sites in Agoda. I’m sure it would cost a little less if the booking was for a different time of the year and weekday rather than weekend.

Thanks for popping by! May the Journey Never End!

7 thoughts on “Woodroffe Hotel on the Gold Coast, A Comfortable Business Hotel at which to Stay!”