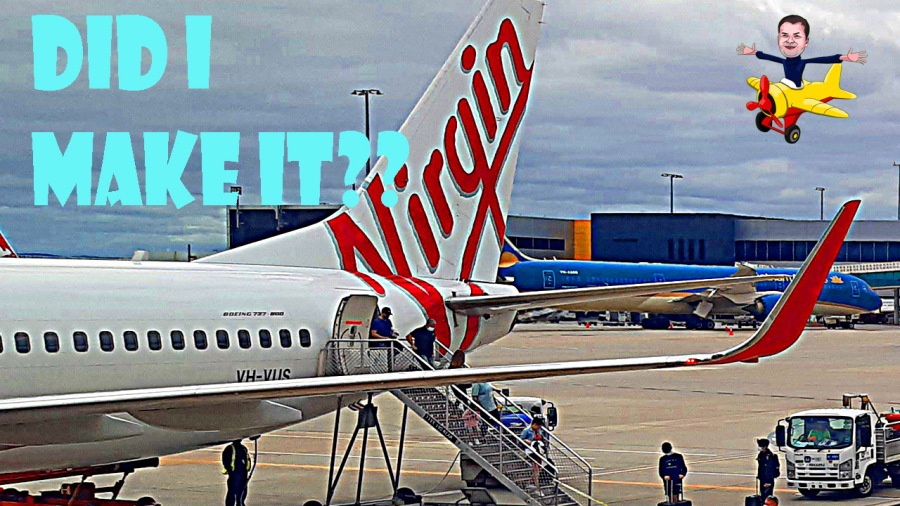 Howdy all. Flying is not something I’ve done much of in the last couple of years. In the period of 2020 – 2021 in fact I took a total of three flights, two and from Hobart and to Adelaide, the third one, which I nearly didn’t make, and this is the one that is the subject of today’s blog post! But firstly I need to take you back all the way to December the 24th, 2021. Yes, it was Christmas Eve!

But I wasn’t going to Adelaide on Christmas Eve. I was going on Boxing Day, the 26th of December. The only thing was that at this time to travel interstate from Victoria to South Australia, Queensland and Tasmania (and perhaps Northern Territory) everyone needed a negative PCR test taken within 72 hours of your arrival. Well, I wasn’t going to do it on Christmas Day and I was worried the 23rd might be too early, so I had a couple of hours free on the 24th and that’s when I decided to do it.

I was actually very lucky with the test. I arrived at the Chadstone testing centre, in a mutli-storey carpark next to the TAFE there, with the signs flashing outside that testing had been suspended. The number of people getting tested in the pre-Christmas rush had been astronomical as had the case numbers.

But I drove in despite the sign as the car in front of me was doing the same, and in good news they were accepting new people for testing, the sign was there to slow the numbers down or something, which I was a bit disingenuous but with the numbers what they were, inevitable. Luckily though the sign had reduced the queue substantially and within about 80 minutes I’d had my test done and I was out of there.

I finished packing on Christmas Day. I knew there would be a little wait for my test result, I’d done the test at around 430pm the previous day though and my flight was 4.10pm on Boxing Day so I was feeling reasonably secure that I had plenty of time to get the result, which in Australia, provided you are negative, comes in the form of a text message.

I woke on the morning of the 26th, and went straight to my phone to find still no result. The longest I had waited for any of my seven or eight PCR results was around 30 hours, but we were now over 40 on this one. I decided as a precaution to head to the airport early, in case I needed advice about what to do, but I was just starting to worry a little at this stage.

I was shooting a video on how to get to the airport from home via public transport too, so I needed a bit longer. It took around 90 minutes to reach Melbourne airport and I was there by about 1245pm for my 410pm domestic flight with Virgin Australia.

In Terminal Three it was really busy. When I had flown to Hobart earlier in 2021 the airport was dead quiet. Of course, it was the silly season and people were going everywhere. But there were loads of people at the Virgin Australia self check-ins, actually I don’t think for domestic you can check in the old fashioned way anymore, it’s the machine or nothing. I had technically checked in the previous day online anyway.

So I asked an attendant helping people with the check in, and informed her that I still hadn’t received my negative test result. I’d spent half of the time checking my phone since I left home, and every time I got a notification it came with a dash of hope which was quickly dashed when I saw it was advertising for Kogan or something along those lines.

I couldn’t board the plane without my PCR result. So, what to do? I was advised to call the people who had done the test – Melbourne Pathology – and see if I could get a ‘fast tracked’ result. As I had now waited 44 hours I didn’t really see it as a fast track, but I sat down for lunch at a little café and called Melbourne Pathology.

I called before one, they answered at 2.10pm. Obviously I was not the only call in a similar situation, which I briefly explained to the lady I spoke to. She said she would ‘email’ the lab. That was it. I was not convinced as you might expect. Email is not the world’s most urgent form of communication!

At 245pm I was pretty sure I could not get on my flight, so I headed to the service desk and told them of my issue. I was told there were a hundred people in the same boat waiting for PCR tests for various flights. There’s something calming about knowing it’s not just you. And I could wait until 340pm to bag drop, then they would try and get me on a later flight, but I shouldn’t check in/bag drop until I had that test result.

So I sat down next to a girl heading to Brisbane at the same time as my flight also waiting for her PCR test. I just sat there thinking through my options in my head. 3pm passed. If it didn’t come through that day, well, I would probably have to stay at an airport hotel and hopefully could get a seat on an early morning flight to Adelaide. That way I wouldn’t have missed much time. 3.15pm, hadn’t heard a noise from my phone in a little bit. Decided to check it and there it was! An hour before my flight, my negative PCR test had arrived! Talk about cutting it fine!

I did my bag drop, went through security and to the gates. This section was packed and so chaotic. Planes have a very effective filtration system for the air they circulate, which is good news in being protected from Covid, but here in this terminal honestly, it was crammed full of people way beyond the point where one could practice social distancing.

On the plane for a 10 minute late take off. A Boeing 737-800 – not the MAX I believe – and I was a few rows from the back. I’d selected my seat at the window, three-three configuration – with someone already having taken the aisle seat, in the hope the middle seat wouldn’t get taken. But it did – the flight was basically FULL. I didn’t see a free seat. We boarded from the back and exited from the back too which I liked. Much easier than getting held up trying to get to your seat, although I expect the reasoning had more to do with Covid.

The leg room was decent. The flight was a little bumpy at times but not overly so. The width of the chair wasn’t great, and I struggle to understand whether Virgin is a full service airline here or a budget airline. Snacks were available on board, but they were all packets of chips and the like (I had Cheezels) and so no sandwiches or hot food. It’s not really an issue on a flight that’s just over an hour.

The views were actually quite cool, there were large crop circles I could see from my window seat somewhere in the vicinity of Western Victoria, and the coastline looked stunning too. The approach to Adelaide was also impressive, the airport is not far from town and boy as we came down we went right over the tops of the houses, fence, runway! So it’s a little hair raising when you can’t see what’s in front of the plane. They offered entertainment for free straight to your device – but as far as I could see you needed the app preinstalled on a phone or tablet. I tried to download it connecting to the plane wifi but was unable to do so on board. All I was really hoping for was to see the flight path, which isn’t really available on domestic flights at all.

Touchdown and I was in Adelaide, and one last hurdle to jump over. That was the Covid Screening. It was set up on a series of desks. I had to have the Health SA (South Australia) app installed on my phone so that I could report any daily symptoms (which I had done) and show my proof of vaccination and negative PCR test. It was there that I realised that Virgin had never actually asked for either! I was sure that Virgin required passengers to be doubled vaxxed, yet no-one checked and I had proffered the information that I hadn’t yet received my PCR result, I wasn’t asked at all. I asked at the airport what if I hadn’t got a PCR result and I had arrived in Adelaide, I was told I would just have to do one there.

I made it safe and sound to Adelaide on the flight I was meant to, and that’s the main thing, but travel during a pandemic is certainly a different experience, and there are a number of chinks to iron out of the armour as we go forward. Thanks for reading today, take care and stay safe wherever you may be in this world – and May the Journey Never End!

PS – See also my video on the experience!

12 thoughts on “How I Nearly Missed My Flight to Adelaide!”