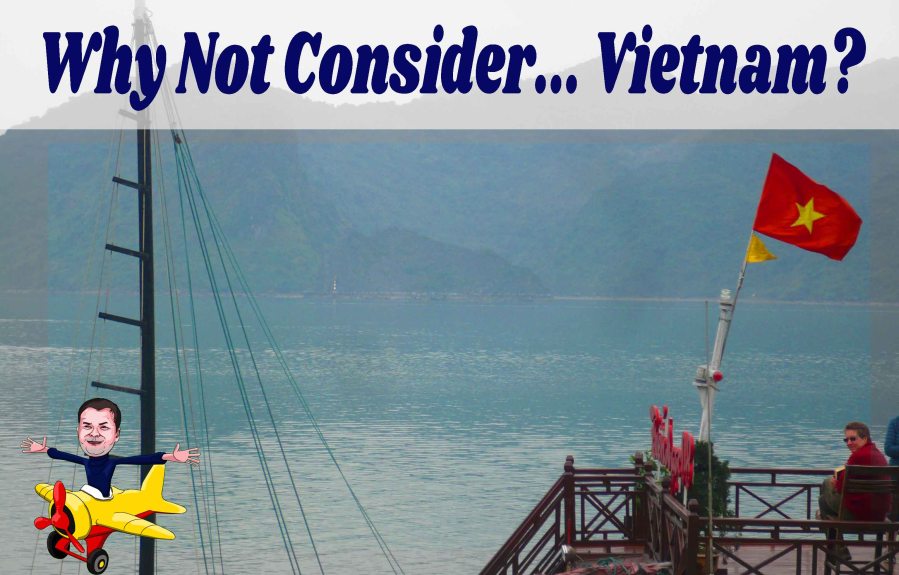 Yes, time for another country you may not have considered visiting before but in my humblest of humble opinions, you really should! And today it’s Vietnam. Yes, I know that plenty of people do consider and indeed visit Vietnam, but I also know that I have met people who are surprised to hear I went there, not considering the place as a tourist destination. Is that association with the war there or communism? Or just that countries like Thailand are so very popular that Vietnam hadn’t been on the radar? I really don’t know. But perhaps, just PERHAPS, you hadn’t considered this amazing country – one that actually did pretty well in containing Covid-19 in 2020, well maybe once the world doth start to open up again, maybe you should!

And why is that? Well, it’s a beautiful country with friendly warm people (although I will mention that I have known people who disagree with me on the last point, but personally I only met genuine people who wanted to know a bit about me, my culture and practice English), with some amazing sights and opportunities. It has caves and beaches, cities and tiny villages in the hills, oh and it has Halong Bay, one of the most drop-dead gorgeous spots in pretty much the entire world!

The visitor who has the time on their hands to spend a month or so in Vietnam can get to quite a bit of the country, and it would make sense to start at one end (north or south) and move to the other one by the end. The two main cities in the country are Hanoi, the capital in the north, and Ho Chi Minh City, former Saigon, in the south. For the purposes of this post I am going the direction I went when I visited some… oh my goodness, 10 years ago now.

I arrived in Ho Chi Minh City. I stayed at Madam Cuc’s, a well known backpacker place – see the review – Retro Review – Madame Cuc’s, Ho Chi Minh City. This sort of place is known as a ‘mini-hotel’ and there are loads all up and down the country providing cheapish but neat, clean accommodation for everyone. If you’re travelling on a budget but not a dirt cheap budget (they cost usually $15-$20USD a night) than you can’t go wrong with a mini-hotel.

You’ll be amazed by Ho Chi Minh City as the bicycles speed past in their hundreds and the chaos surrounds you but seems to just work. Lots of parks (where you can meet locals for a chat or play hacky-sack) and temples to visit. And it’s a great place to jump off for a tour of the Mekong Delta (which I wish I had done) and the Co Chi Tunnels – amazing tunnels that the Viet Cong hid in and were used to get from point A to point B without anyone knowing. They’ve been made bigger so that those with a different physique can get through them.

Dalat was my next stop, a delightful hill town where it was much cooler and there’s an awesome toy train (steam!) that you can take. I also did a day tour around the region and saw a beautiful park and a charming old house. Art Deco I think actually! Which is awesome, of course! Also try some Vietnamese wine if you dare whilst in Dalat!

Nha Trang is a beach spot for you and well, the beach is a bit average and the place does have a little dodginess here and there. It’s not unpleasant and there’s plenty of bars and restaurants, but it’s also a little seedy at times if you know what I mean. If you are looking for a bit of beach time though there are worse, but Nha Trang is not a reason to go to Vietnam, more a place you might go because you want to break up your journey or just chill in a spot for a few days.

Further up the coast is the lovely Hoi An. It’s full of old houses, markets, gardens, a beautiful Japanese bridge and a great place to hire a bike and ride around. You can head out to a nearby island there and see the sunset. It’s one of the best places in my opinion in Vietnam and shouldn’t be missed, although it does see a lot of tourists. It has a bit of a mini-Angkor called My Son a short journey from Hoi An, best done probably on a tour. It’s interesting but doesn’t come close to rivalling Angkor in scale.

Further up the coast – do take the train if you can because it’s a magnificent train journey not far from the ocean and the views are breathtaking – is Hue with an amazing citadel, friendly people and more. You can take a tour down river on a boat and visit some amazing sites too such as caves, the DMZ and there was an ancient city down river I remember.

Further along, continue if you can by train, if you love train travel I am sure you will enjoy the coastal adventure of rail in Vietnam. Hanoi is a bit of a different city to Ho Chi Minh City, and was quite cold when I was there. Again interesting parks, lakes, a couple of museums – you can visit the prison where John McCain was imprisoned which is a little creepy but also worth it. The backpacker area is nice and there are loads of backpacker options including hostels. From this area you can book your tours to Halong Bay and to the Hill Tribes in the north of Vietnam, which I definitely would have done had I the time.

Halong Bay is like a postcard really. You spend a night on a boat and visit caves, you can kayak if you like (I don’t!) and I think there is probably some snorkelling on offer too, however I wasn’t into it back then. Today I would love to snorkel and swim in that ocean!

It’s like Rio de Janeiro in the water in some ways. I’m specifically talking about the rocks that stick up out of the ocean, that’s what gives it the amazing look it has. Really something special. Honestly you could just stay on a boat and float around for a week and you would love it.

Vietnam is vibrant and exciting and emerging as a real tourist destination – or at least it was before 2020 stopped the entire world – and I’m sure once things are under control it will become a great destination again. Thanks for reading, take care, and May the Journey Never End!

12 thoughts on “Why Not Consider… Vietnam?”