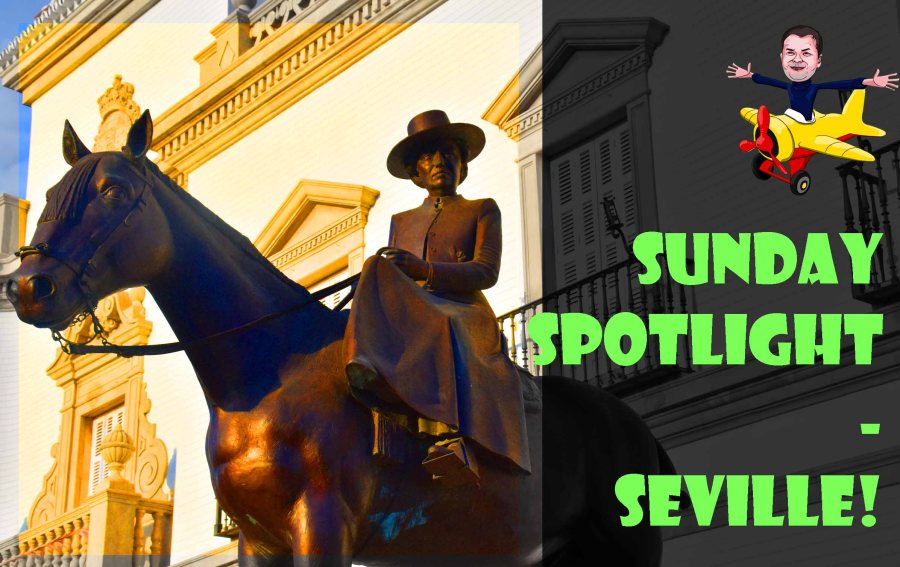 Hey all. So. Do you know what south-western European city is even better than Porto? I’ll tell you – although the title of the post is something of a giveaway I must confess – it’s SEVILLE. The capital of Andalucía, a province of Spain. Oh my it really is a wonderful city, with a blend of Spanish and Islamic architecture, a centre for bull fighting, one of the world’s biggest cathedrals (where Columbus rests if you don’t mind) and so much more!

So come along with me as I tell you why Seville is very much a city/town/place worth shining the spotlight on!

Seville was founded in the second century BC by none other than the Romans, when it was originally known as Hisplais. So it’s a pretty old these days. Not that there is a LOT of Roman evidence left today but maybe, if you look hard enough, you’ll find something that at least seems to have a Roman influence.

It’s not a very cold place, even in late November it was 18 degrees each day when we were there. In the Summer though it really really warms up to the mid to even high 40s some times. So I would think best to avoid July and August at least. It’s a very dry part of the world so a lot of rainfall is rather unlikely whenever you are there (I say this but we did have one day where it rained and rained and RAINED lol – was told it was very very rare.

The modern-day population is a little under 700,000. It has two parts to the city (like Khiva does) and old city and a newer city. Although the new city is the part most people arrive in – the train station with a fast train to Barcelona and I think Madrid. Seville does not have a Metro but it does have a fair bus network and in the Old City there is a tram.

Like many cities with a walled (yes it’s ‘walled’) Old City, tourists and visitors flock to the old rather than the new. And that’s okay because Seville’s Old City is actually quite big. It’s also a great place to explore on foot – and there’s so much to see there you could be busy easily for a week. Let’s have a look at the sights that I can tell you about!

The Seville Cathedral is sort of in the middle of things and if you are lost in the maze of narrow alleyways in Seville you may look up and be able to see the tower. That tower and spire is 105 metres tall and you can climb it for the best views of the city you are likely to find. It’s got loads of rooms to explore, including one that is oval, and yes it’s also the burial spot of Christopher Columbus. It was completed in the early 1500s and is the perfect place to start exploring Seville from.

The other big blockbuster (and probably number one sight) in Seville is the Alcazar Palace. It’s massive with some incredible grounds and several buildings where you can see the Islamic influence on Spanish influence in full swing, but perhaps the most beautiful part of it are the stunning gardens.

One thing which is a little bit different perhaps to the run of the mill tourist sights and really worthwhile visiting is the bullring – the Plaza del Toros. At the right time of the year you can see bullfighting, but I found it interesting enough to just visit and take a tour of the stadium (not sure how I really feel about bullfighting). It is certainly infused with passion and history though!

There are a few houses about the place which are worth checking out – historical houses now open to the public as almost museums. Casa de Pilatos is not the birthplace of stretching, but it is an interesting place to visit with some beautiful tilework and plenty of history on display.

Have a look at the Castle of Sao Jorge which is now ruins and a great little museum by a bridge on the river Guadalquivir (yes it’s a ridiculously long named river).

I think the most memorable place in Seville is probably the Plaza d’Espana, this almost garish but yet attractive in its own way almost half stadium with a little bit of a man made river in front of it where people take gondolas. It’s a hub of activity for sure, and I saw some flamenco dancing there as well – there’s a museum of Flamenco in Seville also which you might want to check out.

Then you have all the squares, the tower by the river, there’s an interesting convent transformed into an art gallery, and so much more to explore in Seville. You really can’t be bored there! And plent of restaurants – we tried a couple and liked every place we ate. Tapas, meat, all sorts of things on offer. And a friendly vibe too.

Seville is one place I’m very happy to shine the spotlight on. I think when we can move around more freely and with confidence, it’s a place if you haven’t been you really should! Thanks for popping by today! Take care, and May the Journey Never End!