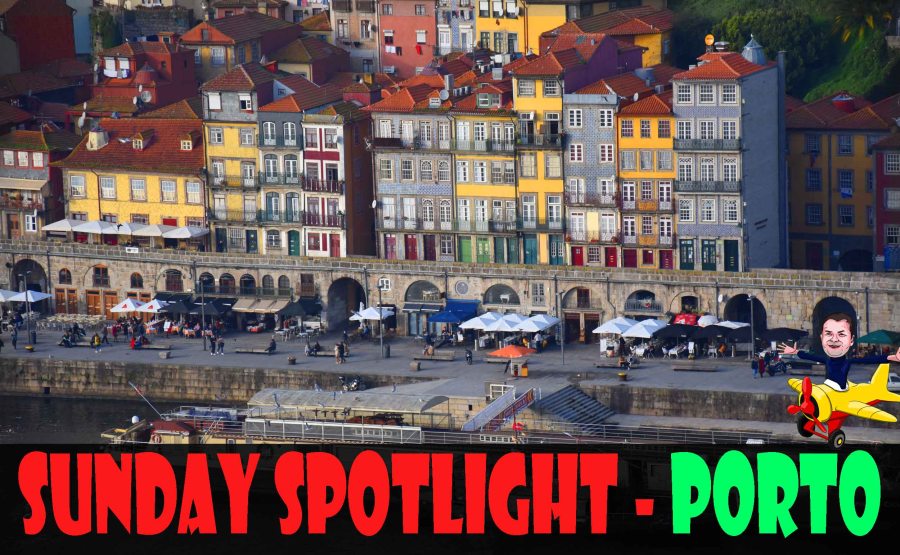 Howdy all and happy Sunday to you all! It’s time to take my spotlight and shine it around the world until I find a city where it rests and today I am shining it Western Europe direction and it’s landing on the fabulous Portuguese city on the Douro River, it’s landing on Porto! So let’s see what the spotlight reveals on this amazing destination.

Well, we have a gorgeous city here, very different in many respects from the Portuguese capital in Lisbon. In one area though there is a big similarity, so be prepared – hills! You are going to need your walking boots on to get around the cobblestoned streets of Porto. Although you could take the trams or the metro system, but I think really you will want to do a bit of walking around this city just to take in its beauty and medieval charm.

The city has an interesting associated with the drink of port, which is a fortified wine and quite strong but yet very agreeable in taste. And so one thing a lot of people do is to visit one of the many wineries on the south side of the river where port has been made for hundreds of years. Port became a big thing and a major source of income because the British had an issue with the French, and it turned out this kind of wine was more to the liking of the British palette.

I visited Taylors, but there is a wide selection of wineries that you can visit in Porto and frankly, Taylor’s is at the top of the hill and there are some at the bottom. Sandeman’s is one of the more popular ones. But there is, well I don’t know how many but I would say at least a dozen. And it’s a lovely thing to do, take a winery tour, because at the end you usually get to sample the local produce.

That side of the river is perhaps the less interesting side over all – in terms of individual things to see. But it does have a cable car/gondola which you can ride and get a good grasp of the city on a clear day. That’s just at the end of the famous Louis I Bridge which is the most famous Porto landmark, a bridge that has two levels, the top for the metro which is sort of a modern large tram (as opposed to the older trams that ply the Porto streets) and the bottom one is for traffic. Both, however you can walk across which is nice. All that’s missing is an easy way to get from the top to the bottom or the reverse.

The north side of the Douro is a maze of streets and amazing buildings. Perhaps the one I liked most of all was the Bolsa Palace, not far from the covered market and the San Francisco Church, and thankfully it was made out of sturdier stuff 😉

A tour is a must and you’ll be taken around a number of beautiful rooms and see how the lands were once ruled. The sort of Atrium in the middle has a wonderful glass ceiling and was my favourite. The San Francisco Cathedral is interesting too and has a creepy crypt you are able to enter and wander.

The Sao Bento station is a famous station sort of built into the side of a hill, a beautiful building where we caught a carol performance as we were there just before Christmas 2019. If you’re looking for something a little different, the Livraria Lello is an outrageously popular book shop with a beautiful interior. They charge to go in there because it’s famous due to the fact it was frequented back in the day by JK Rowling as she was writing Harry Potter, and the interiors are said to have inspired her. In fact you have to pay to get in! Which doesn’t stop anyone from visiting it should be said, you can barely move in there!

Other highlights of the city include the Clerigos church and monastery, connected to the Clerigos Tower which gives great views of Porto from above. The Se Cathedral and adjoining buildings are also nice. I really liked the Jardins do Palacio Cristal, they are great to walk around and you’ll find an historic house hidden in there somewhere too. And there are clearly a number of things we didn’t get to see too.

Food wise, well, we ate very well in Porto although I wasn’t a fan of the Porto favourite, a suckling pig sandwich. I recommend finding one of the smaller, pubstyle places for real, delicious local food. I have to say there were surprisingly good tapas to be had near the Douro, and Cantina 32 is a restaurant we had a meal shouted for us and it was really good, brilliant steak and I had black pudding which is surprisingly available at a lot of places in Porto.

Porto is worth for sure four to five days of your time, or more if you like to take things slow. It’s a genuinely brilliant city to visit in Europe, with it’s own vibe and feel. I strongly recommend it as a place to visit during any trip to Western Europe. Thanks for reading today, take care, and May the Journey Never End!