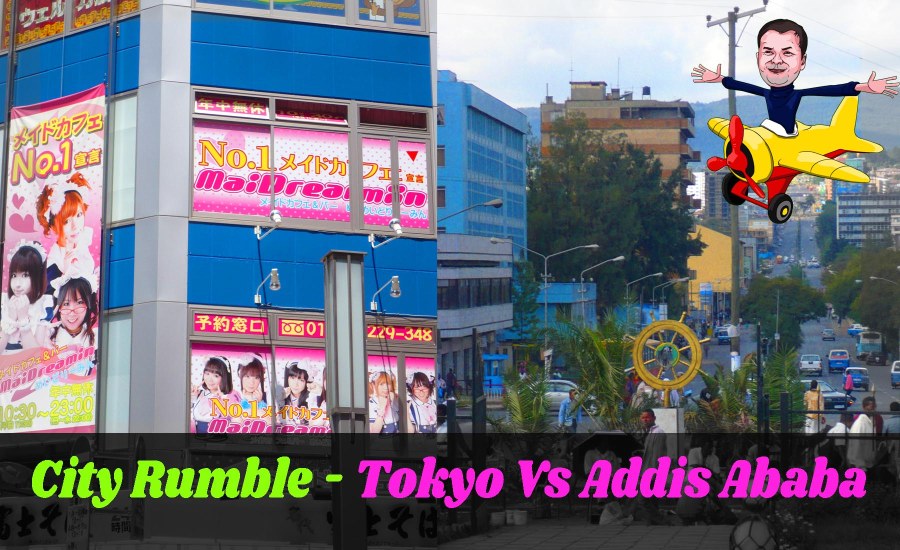 Yes folks, the match ups do seem to be getting less and less logical. The third round continues though with a real contrast in cities as Tokyo and Addis Ababa do battle with each other in what might seem initially like a lop-sided match up, but keep in mind that last week we saw what seemed like a highly unlikely victory to Dhaka, Bangladesh over Washington DC.

And that’s because my pros and cons are unique to me I guess. Everyone has the things they like and dislike when they travel. The things they look for in a destination, which means there may be aspects to a place that a lot of people love – but don’t me much to the individual, who in this case is the somewhat idiosyncratic ME. I haven’t seen any #stopthesteal tags for my previous rumble as yet, remember this is not a democracy! It is what it is and places that don’t appeal to some people appeal to others, and vice versa.

The thing is though with these rumbles, I trying to follow a draw that at this stage is somewhat illogical in terms of comparing like for like. And so the challenge is before me to see just how do two seemingly completely different cities compare? And if that means they appeal in completely different ways, which of the said ‘ways’ is more meaningful to me? And please do comment so that you can share what aspects of the cities are appealing and important to YOU.

With that in mind, we head to Japan and Ethiopia to see how their capital cities compare to each other. Are there some surprising similarities? And are there any differences that you might not have considered before? All in all I can do is get this started with the now time-honoured tradition – ‘Let’s Get Ready to RUMBLE!’

The Road to the Third Round

A few moons ago plus three Tokyo had its first City Rumble, and it went against another huge city in northern Asia, that of Shanghai (which earned a second chance reprieve). You can read about that contest here – City Rumble – Tokyo Versus Shanghai. In the second round it had a serious mismatch against the very pretty Tallinn, Estonia, which one reader compared to putting Mike Tyson up against Heidi Klum. I’m not sure I could do that one, but well here’s how it went – City Rumble – Tokyo versus Tallinn. Although I should have pointed out back then, only one of the two cities has EVER hosted Eurovision, and although it would fit right in in many respects, that city was not Tokyo!

Addis Ababa was one of the cities that came through the second part of round two draw, meaning that it skipped round one altogether. It came up against the Ghanaian capital of Accra, and here’s how it got through to today – City Rumble – Addis Ababa versus Accra.

Ok so here is, as I see it, the biggest difference in the two places. Addis Ababa is the capital of Ethiopia, a country in Africa, the continent where humans evolved from. In fact, up until recently, the oldest human skeletal remains, that of ‘Lucy’ (no sign of Ricky) were found in Ethiopia. How old did they date Lucy? Well, 3.2 million years old, which means she is no spring chicken.

Geographically, Japan is one of the world’s youngest land masses. And people are dated back as living in Japan for about 30,000 years. There in lies the stark difference. In Addis Ababa you can in fact go to a museum and see a replica of the skeleton found of Lucy.

Lands of Fire and Ice

Both cities are capitals of amazing, AMAZING countries. I love both Japan and Ethiopia – my favourite country in Africa (that I’ve visited). Japan being such a relatively young country is a country of earthquakes and volcanoes. Incredible mountains such as, of course, Mt Fuji (a possible day trip from Tokyo). Or head out to Hakone, mountains, forest and lake where steam rises from the peaks and you take a gondola and see some seriously incredible views.

Ethiopia has mountains, jungles, deserts and the Danakil Depression which is one of the lowest points on earth. None are day trips though from Addis. There is no super-fast rail in Ethiopia sadly. The country to the north is incredible mountainous, some of the world’s oldest mountains, and Addis itself is at 2,355 metres in altitude making it one of the world’s highest capitals. So it’s in the mountains.

Transport in, to and from

Addis Ababa is the hub, naturally of Ethiopian Airlines, one of the biggest airlines in Africa and regarded as one of the best – possibly second best behind South African Airlines. It connects to 127 different passenger destinations. And domestically it connects the country well and with the terrain of Ethiopia, that’s vital.

But does it compare to Japan Airlines? It’s hard to say for sure, I haven’t travelled on Japan Airlines, but it’s incredibly highly regarded especially for its service. I expect it’s quite a bit better as a travel experience and for on time departures though.

Japan is one of the world’s best countries for internal transport, with plenty of airlines but also the bullet trains, which leave on time and take you around in comfort. The Shinkansen is hard to beat, and it’s backed up by slower trains and Japan Rail even run a decent bus service.

Tokyo’s Metro is comprehensive and efficient, although they do tend to push as many commuters onto the trains as they possibly can! Stylish cabs ply the streets, you have buses, a monorail and more.

Addis is one place you end up walking a bit. There are local buses, but I visited with some friends and so if we needed to go somewhere we didn’t want to walk, well, we took a taxi. Plenty of taxis, some pretty beaten up, but usually not an issue to find one. Be aware if you have just arrived of the altitude and don’t push yourself walking too hard initially, you may need to acclimatise.

The Ethiopian currency is the Birr, and one USD is worth around 40 Birr. I don’t remember that sort of exchange rate from when I was there, I think it was more like 10 or less back in 2009. But this shows the volatility of the local currency. The Japanese Yen is currently around 105 to the USD.

Cost-wise Ethiopia actually was one of the cheaper African countries I’ve visited. It’s not Ethiopia cheap, and you get what you pay for, but it does represent decent value for money and is certainly cheaper than countries in West Africa which can surprise you in how much things cost.

Japan is not the cheapest country in the world. But I think its reputation as being really expensive isn’t fair either. It’s cheaper than you think and there are ways to cut costs, especially if you limit your eating out whilst you’re there.

Hotels in Japan are often expensive and cramped. All of these sort of issues are magnified in Tokyo. But hostels in Tokyo and Japan are excellent and worth trying. Single and double rooms are often available and you will meet people. Ethiopia it’s a bit harder – much fewer tourists. The Ras Hotel is where we stayed and it wasn’t expensive, it was friendly and in a great location.

By now I’ve talked in other posts and rumbles about the sights ad nauseum. So I’m not going to get into them all here today, because I feel like I will be rehashing stuff I’ve written about many times. Suffice to say that Addis is not huge on sights, and Tokyo has more than you can poke a stick at. Honestly if you tried out everything for the tourist/visitor in Tokyo you would need a month or more. It has so many parts to it – Shibuya, Shinagawa, Ueno etc and each has a huge range of stuff to see and do. Not to mention Tokyo Disney. So if you are one that likes to pack things in when you travel, Tokyo is an easy win here.

Such a contrast here, but both reward the visitor in their own way. Tokyo is the main spot for Japanese alternative culture if you will. Akihabara and Harajuku will show you where the disenfranchised youth of the country are at if you stroll through there. There are millions upon millions of people in Tokyo, and you’d be surprised how helpful and friendly they can be!

But actually, I found Addis to be friendly too. We met a few people when there, there are places to sit and drink beer out in the open which is great because we met some locals who then invited us out to a beer hall and we had a good time and great conversation. You also can feel a pretty good vibe through the young people in Addis.

Finally food. If you are a lover of Japanese cuisine – and a lot of people are and there is some fantastic Japanese food in the world – then obviously Tokyo is going to be a big winner for you! However, if you like a place with loads of different cuisine, although Tokyo offers an international mix, you may find that the Japanese spin on different cuisines is a little… eccentric shall we say? I mean, a raw egg on top of my bolognaise at an ‘Italian’ restaurant one night certainly had my eyebrows raised.

If you’re in Addis you may be surprised to find that it is THE place in Africa for Italian cooking, thanks to a very brief period of occupation in the Second World War. It’s very common. And Chinese food is too. The local food is spicy, there are stews with goat, a sour bread call injera, but it can be very tasty. Ethiopia is also a big producer of wine. I think Addis stands up pretty well in the eating stakes!

Yes yes, the winner is clearly TOKYO. It offers more than most cities world wide. But spare a thought for Addis. Hilly, dry, cool, good food, it’s really a surprising African capital that you can easily grow a soft spot for. Ethiopian culture is old and connected through to the Middle East, Ethiopian Orthodoxy is one of the oldest strains of Christianity in the world. Japan is everything and more and rarely is the visitor disappointed or underwhelmed. But Ethiopia… it’s worth your time, honestly!

Thanks for reading, comments are always welcome, take care – and May the Journey Never End!