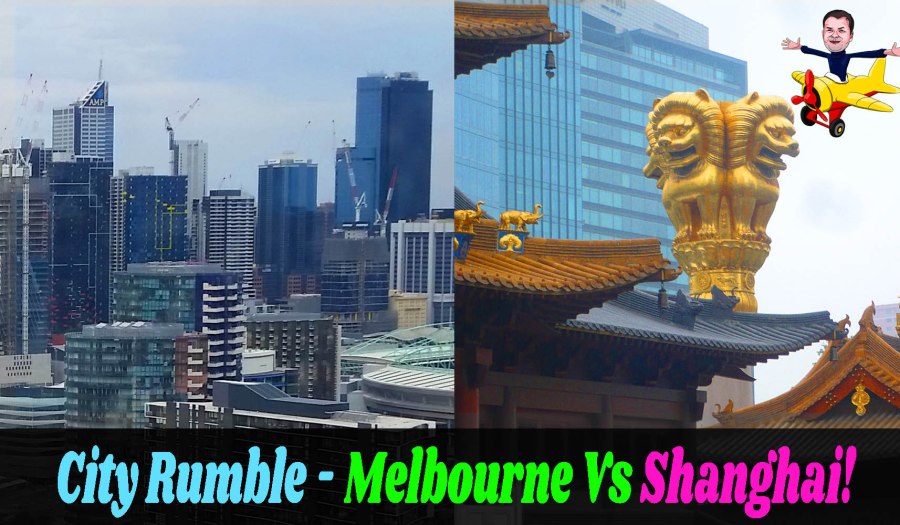 Yes folks, it’s time to rumble yet again, and well I’m a bit nervous today because I am pitting my hometown, Melbourne, against destination Shanghai, the business heart of China, one of the biggest cities in the entire world and well, as I type my introduction I genuinely don’t know which city is going to win.

The third round is now off and moving and the winner of today’s Rumble will find themselves up against another heavyweight competitor in London which came through last week against stiff opposition from Jerusalem. And from here on in most battles are going to be tight contests, no doubt. So without further ado… Let’s get ready to RUMBLE!

Melbourne on the other hand swept aside it’s Aussie rival and city which makes a big deal over a bridge and it’s Opera House (that would be Sydney) – check out City Rumble – Melbourne Versus Sydney. Then earlier this year in the second it came up against Bishkek, the capital of Kyrgyzstan, something of an odd match up I guess, where it came out the clear winner. See City Rumble – Bishkek Versus Melbourne.

As per this round I am comparing things as categories, and in each case in the third round they might not be exactly the same categories every week, as some might be relevant to some cities and not to others.

Melbourne is a pretty well connected city all told, at least whilst there isn’t a raging pandemic going on. Obviously Qantas flies here direct from most parts of Asia along with a string of Asian airlines including Japan Airlines, ANA, Singapore, Thai, Sri Lankan and many more. Direct flights to New Zealand as well and even I think Santiago, and the West Coast of the USA. Hawaii, Pacific Islands. Otherwise you’re looking at a connection somewhere through Asia or at least a brief stop.

Shanghai has an extremely busy airport, and it would have more flights in and out without a doubt. That’s not to say that it’s a positive thing, as it’s so busy it can be a bit much and I remember sitting on the tarmac for over two hours waiting for my Spring Airlines flight to take off. As a connection city, Shanghai is an okay option but not one exercised nearly as much as Hong Kong or Guangzhou in China. To use Melbourne as a stop over you really would be going a long way out of your way. It wouldn’t make much sense unless you were travelling to New Zealand or other states in Australia. As busy and crazy as the airport gets, it’s not nearly as stressful as Shanghai airport.

Most airlines in the world fly to Shanghai and it seems pointless to start listing them.

So I haven’t had a lot of experience staying in a hotel in Melbourne. I did stay a night at the Park Royal at the airport here and it was really really nice, a top quality hotel. I compare this to my accommodation in Shanghai, which was in a hostel where I had my own room. The hostel was around $35AUD maybe $40, but comfy. I did need to move rooms on the first night as there was noise in the corridor outside my room, but I liked staying there.

For sure Shanghai has an incredible amount of top end places to say. It is one of the business capitals of not just Asia but the world, and so it would need to cater to that end of the market. Melbourne does have a number of good hostels, people I’ve known who’ve stayed in a Melbourne hostel have been pretty happy with the standard and the way the hostels have linked them into activities. And we do have a number of top end hotels too, as well as a casino which offers accommodation. It’s hard to divide them on this. Shanghai you probably can get a good to great room for less than Melbourne. Australia’s hotels are often quite expensive and not always value for money.

Shanghai has a pretty decent metro system, taxis, buses and more. I was there for four days and pretty much exclusively used the metro, which to my mind suggests that it’s pretty efficient and certainly the trains come very regularly.

Melbourne has trams, buses and trains. The trains are undergoing a massive overhaul which will probably take ten years in all. That’s not to say that things are dire whilst they do works, but there have been some pretty frustrating disruptions when you least want them. And these are set to continue as the system is upgraded. The system will service more places and there will be more connections, and it’s set to make a big difference to people’s lives. Taxis and even Uber are pretty expensive, cheaper in Shanghai. Trams are fun and useful but won’t take you anywhere particularly fast and have to deal with whatever’s happening on the road. Buses fill the rest of the gaps and aren’t bad but they don’t seem to run to the supposed schedule set for them.

So in this category I would have to say Shanghai comes out on top. The first two I feel they both had pros and cons which left them fairly even.

Okay so already I would say accommodation-wise we have Shanghai slightly in front in terms of value for money. The Aussie dollar used in Melbourne is around 76 cents USD, and one USD will buy you around 6.5 Chinese Yuan. The Yuan is actually deliberately kept lower than it might float, which is a sticking point with many governments including the US govt, but all in all it probably means that China is a cheaper country to travel because of this factor.

Having said that, China is not an ultra cheap place to travel by any extent of the imagination and Shanghai is one of the most expensive, if not THE most expensive, city in the country. All in all though, Melbourne is more expensive. Transport, food and accommodation I have found are more expensive at home for me than in Shanghai, although it’s not a MASSIVE difference.

Melbourne for its size and location has amazing shopping potential from fashion to food and more. Shanghai though again is a huge city on the fashion scene and purely by its scale it is bigger than Melbourne. And probably slightly cheaper although in this category, I have no experience whatsoever! Having said that, I do not travel to shop and if you are the same as me, you may find this point somewhat irrelevant.

So this is something that I wanted to bring in for this one because Melbourne is often talked about in terms of ‘liveability’. It always ranks highly in this category when they release the official rankings, whoever ‘they’ may be, and for sure it has Shanghai covered in this category. Although I’m not sure its as liveable as many say. But the climate in my eyes is a PLUS for Melbourne. I am not a fan of the heat. I don’t mind hot days, but hot nights reduce my ability to sleep drastically and frankly – who needs this?

Shanghai is steamy and hot for much of the year and it’s not particularly pleasant. I went in late April/early May and I would have been happy if it were a few degrees cooler and less humid, but my hostel was good enough to have air conditioning so that countered it to some extent. Melbourne gets cooler in the winter, but it’s not a city which sees snow and in the summer we do get really hot, but it never lasts for more than a few days in a row and we get awesome cool changes that drop temperatures from 40 to 22 in an hour or two. The 2020-21 Summer was rubbish and barely saw us go over 30-32 degrees more than a handful of times, but it’s not normal and the summer was affected by the La Nina weather system. Melbourne can get a bit humid, but not like Shanghai and generally it’s a pretty dry heat.

As for pollution, well, Shanghai is a shocker. It oppressive and very clear that the air isn’t very clean. You see smog over much of the city and it’s really self-evident in my old pictures of the Bund where there is a lot of haze from the pollution. I know there are times of the year when I guess it gets blown out to sea, but I wasn’t lucky enough to see it then and that in no way suggests the pollution is less.

Melbourne may not be as famous as other parts of Australia for its beaches, but it has some nice ones – some I am just discovering in 2021 – and as far as I know, there isn’t a beach worth going to near or around Shanghai. Jinshan City Beach doesn’t really inspire me…

Well Shanghai is going to rule for Chinese food, but Melbourne is an incredibly diverse city and you can find top quality food from so many cultures here from Indian, Thai, Ethiopian, European including Greek, Italian & French, and so much more. If Chinese Opera is not your thing, Melbourne is great for live music, stage plays and musicals too not to mention opera, classical performances of symphonies, ballet and more! Melbourne has the International Comedy Festival in March-April (pandemics aside) and the Fringe Festival later in the year plus others.

Shanghai I know less about, but I know there are performances aimed at the visitor to give you a real dose of Chinese culture. And so I wouldn’t write Shanghai out on the entertainment front and it’s one of the best places in China to find non-Chinese food too.

Things to See and Do

Well both cities have plenty. As I do my ‘Melbourne Revealed’ series on YouTube this year I am finding more and more cool things to do and see around Melbourne. We have the Old Melbourne Gaol, Eureka Tower, Boats on the Yarra, Federation Square, National Gallery of Victoria, Melbourne Museum, Luna Park, Scienceworks, and so much more.

Shanghai I wish I had seen more but the Propaganda Poster Art Museum is really interesting and housed in the beautiful and historic French Quarter. Then there are a number of other museums, I really was impressed by the Shanghai Museum itself. Loads of temples of course, the Bund, historic colonial style buildings and if you’re looking for wacky, well there is the Bund Tunnel Experience….

Oh my. I have to declare a winner. And to me this is very close. Please don’t call me biased I am giving this one, JUST, to Melbourne due to the eating and the clean air. What do you think? Have I made a fair call? Let me know – but please be nice! Thanks for reading today, take care – and May the Journey Never End!