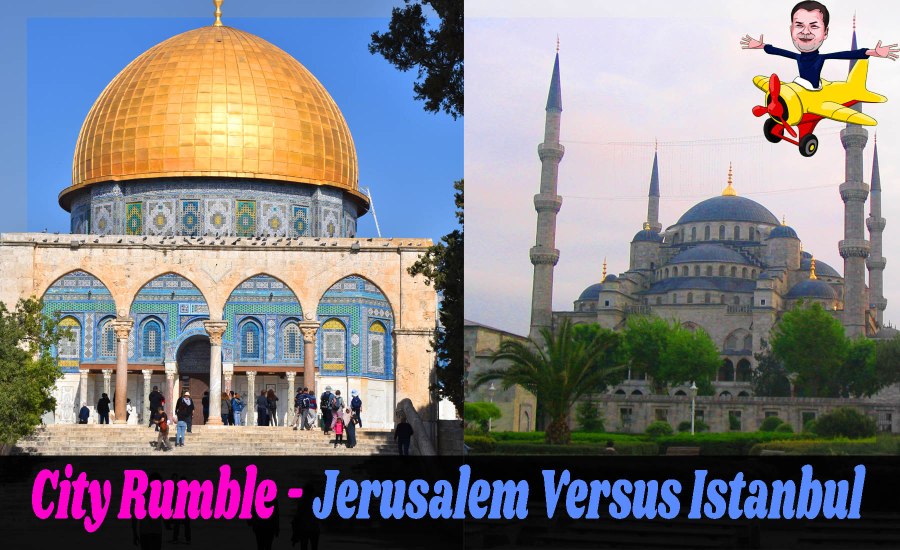 Well folks this is it. The last Rumble in the sort of second round repo charge thingy. From here on things will get really serious! Fifteen cities stand ready to face each other having passed this stage successfully, and they wait for one final city to join them. Who will it be? The choice is between the Israel Capital, the Holy City, focus for three of the world’s biggest religions – Jerusalem. It’s opponent is a bit of a heavyweight too. Istanbul is the only city in the world to straddle two continents, the gateway between Asia and Europe. It’s also been capital to a couple of empires in its day as well. Home to some serious history for the Christian and Muslim worlds, Istanbul today may not be the Turkish capital, but it is still the biggest and most important city in Turkey! So folks, gear up, and let’s get ready to RUMBLE!

We are talking about to highly significant historic cities, cities that have shaped much of the world in their way. Istanbul was not only the head of the Byzantine Era, where it rivalled and perhaps even surpassed the power of Rome in its heyday, but the seat of power during the Ottomon Empire which stretched far and wide, as far west as Spain.

Jerusalem’s history is fascinating. Speaking as an agnostic and a traveller, the majority of countries you visit are clearly Christian or Muslim. Israel is the only Jewish state in the world – and yes that must be taken with a pinch of salt because there are a lot of Muslims living in Israel and indeed Jerusalem. But the country is primarily Jewish-run and if you are Jewish you are able to immigrate to Israel. Nevertheless, I’m not going to look over the fact that there are people in the country separated by a giant freaking wall living in very different circumstances. BUT – I really do try to avoid politics on the blog here. But I do think it would be wrong of me not to acknowledge the situation.

Just over 800,000 in Jerusalem proper and over 1.2 in Greater Jerusalem. Over 15 million in Istanbul, which I must admit, shocked me I had no idea it was THAT big. Yet I have to be honest, I felt the crowds far more in Jerusalem. A quick note at this point as well – my visits to these two cities are 15 years apart – 2004 for Istanbul versus 2019 for Jerusalem.

I’m going to great straight to costs now. Jerusalem is an expensive city. Accommodation, food, entry prices. You need to set aside a larger budget than usual regards of how you usually travel. As a backpacker you may find it extra hard if you are trying to get to a lot of places. Some are free however, and there is a light rail and bus service which can get you around and people are friendly enough and will help you work it out. I had a very basic room which say in India would have set me back less than $15USD, but I paid over $80USD. It is, I admit, a bit unfair to compare those prices but I wanted to give some indication here. Istanbul has a nice backpacker area not far from the Blue Mosque and the Hagia Sofia. Prices are in line with Eastern Europe and it shouldn’t be hard to find an okay room for $30USD or less (comparable to the one I had in Jerusalem). When I was there, a long time ago, it was a dorm bed for around $10USD in a nice hostel.

A couple of bucks in Istanbul will get you a kebab. Jerusalem on the other hand you are looking at a bit under $10USD – although I found a place that made awesome shawarma for around that price and was not disappointed in the Arab Quarter. Anyways – cost is DEFINITELY not the be all and end all. And whatever your paying in Jerusalem, so are the people that live there. Well, presumably most don’t live in a hotel but I think you know what I’m saying!

Climate-wise, Istanbul sees more rain and is a little colder. I have to say I was cold in Jerusalem at times, but it was November and the flip side was there wasn’t much in the way of clouds (which I had heaps of in Istanbul in May) and so in many ways I found the weather perfect (average maximums for me in five days in November were around 18 degrees).

Getting in and out of the countries is a different experience. Obviously Turkey is a far more relaxed country to get in and out of. And I believe visas are not needed by as many countries as they once were – but they were available on arrival. When arriving in Tel Aviv there is a lot of security, you get a little sticker for arriving as they generally don’t stamp in your passport due to the negative implications of having proof of visiting Israel when trying to go to some countries, mostly in the Middle East. Leaving there is a lot of questioning and x-raying and the like.

The airports are poles apart – Ben Gurion which services Tel Aviv and Jerusalem is an older airport and it feels like something from a different era. Istanbul’s scored itself a brand new airport which is modern and sleek and very big too. Turkish Airlines are one of the world’s bigger airlines and boast that they serve more countries than any other. Not sure about getting into town from it but it has to be better than the options at Ben Gurion to Jerusalem which is basically a mini-bus or a taxi. It’s an interesting drive on arrival though, but it does take the best part of an hour.

So anyways. To see? Well Istanbul has plenty. It’s a really interesting place, part chic-European (I had a chance encounter with a Brazilian model whilst I was in a photo shop!) yet also steeped in the history featuring one of the world’s most amazing place of worship in the Hagia Sofia. This amazing building has been both a mosque and a church through the centuries. When I was there it was simply a museum which I thought was a great compromise, but I heard in the last year or so it is (probably has by now) reverting to a mosque.

It’s not that far from the Blue Mosque, which is very large also, and quite beautiful. Then you have the cisterns of the city, a water reservoir underground which you can visit. They have statues down there and classical music plays and it’s actually quite a special place.

Spend time near the Bospherus, crossing on one of the bridges, see people fishing. It’s a wide river and separates Asia from Europe. There are city walls as well which are a way away from the centre of town, where you get to see a bit more of what life is like for the average Istanbulite. The Old Town though is really well preserved and a great place to explore and chill.

Jerusalem hits you with so many options of things to see, it’s hard to know where to start. The Old City sits inside the walls, and it is perhaps the ultimate in old towns. Crowds bustle and push past each other as you find yourself in a large souk. From there you could spend easily three days exploring all the different nooks and crannies along with the notable sights.

For example – the Church of the Holy Sepulchre. Supposedly built where Jesus was crucified and boasting seven different denominations, there are more holy things inside too including the stone of the anointing and the Aedicule. It’s original construction dates back to the 4th century, and it’s been rebuilt once or twice. It’s the most popular church if not site in the whole Old Town, and the crowds are unbelievable.

If you are Christian and looking to do a pilgrimage the Mount of Olives is on the far side behind the Temple Mount. From the top you have amazing views, and I took a bus to the top and walked down which seems to be the way to see it. There’s the Church of Mary Magdalen which is next to the Garden of Gethsemane and more.

Elsewhere in Jerusalem there is Yad Vashem the incredible Holocaust Museum and Memorial, don’t miss that, and the Jewish Museum is a huge museum with loads to take in and the Dead Sea Scrolls if you don’t mind. It’s the sort of museum you could spend more than a day in. Easily!

So. Which is to be? Well, in fact I am going with Jerusalem today. Istanbul has a lot, but Jerusalem, despite the crowds and cost, is one city everyone should visit in their life. And I appreciate it a lot more after being there than when I was there. Istanbul is a great city, but Jerusalem takes the chocolates today!

Thanks for reading today. What are your thoughts? From here I am going to have a break for a week or two on the City Rumbles and return after that with the third round, eight matches to whittle sixteen cities down to eight. The match ups –

So. Which city will it be??? It’s on like Donkey Kong!