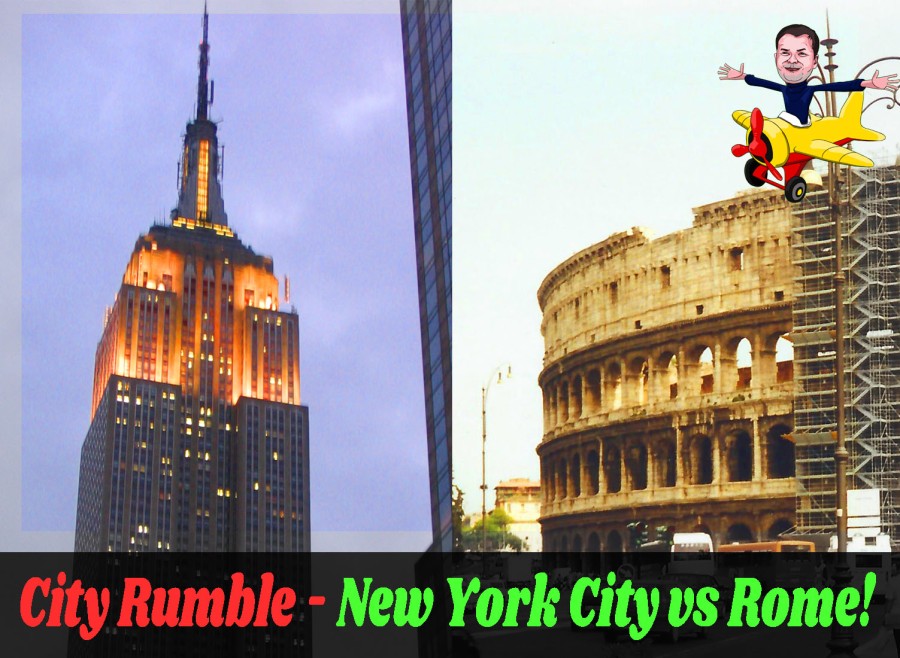 Howdy all. Well today we have New York City up for a second chance in the City Rumble challenge. I think it was the very first City Rumble which featured New York City facing off against another epic city, and that was London. You can read about it here – City Rumble – New York City Versus London. This one comes to you curtesy of 2015!

To give NYC this second chance, we need a competitor, and so in the opposing corner we have the Italian capital, one of the oldest functioning capitals in the world, Rome! Both cities have some serious history, but it’s fair to say, Rome’s history is somewhat longer and older than NYC’s. Both cities are big and bold and see a lot of tourists in any year when Covid isn’t wreaking havoc. And one of these two cities will be heading through to the third round today, as they do battle against each other. So let’s get READY TO RUMBLE!!

Sorry. Or should I do this every time?

The city of Rome has a population of 2.8 million, and 4.3 million in the metro area. And when I looked that up I must confess, I was pretty surprised it was that small. Travel to Rome though has a massive impact. 7.6 million visitors a year will do that to you.

When I last went to Rome, the only time by myself as a backpacker, I stayed at the Hostelling International place. It was right near where they played the Italian Open Tennis. Today the offerings are two hostels called “Allesandro” from HI, and the dorm beds start at around 23 Euro a piece. Which is not dirt cheap but is less than $30USD. Doing a quick search I found that there are a number of places you can get a hotel room at for $100USD or less. So it’s not too expensive a city.

Let’s do the same for New York City. And I found the HI to be around the same price, starting at 24 Euro for a bed, not quite as cheap with the hotels – you’re going to start at around $80USD or a little more for I imagine a pretty grubby place. For something really nice, you’ll want to be spending upwards of $150USD.

Transport – well, getting around NYC, there’s no contest, the subway is the way to go! Okay, it can be a bit dirty and grimy, and not always 100% safe, but then you can meet some interesting characters taking it too! Rome also has a decent metro system – watch for pick pockets as in any crowd in Rome, I can’t say I used buses in either city. Rome especially I found a surprisingly good city for walking. I covered a fair bit of distance it should be said, but you walk past and to so many interesting places.

NYC is not the worst place for walking either, although it’s deceptively large and boy, all those skyscrapers can make it hard to navigate. But of course, once you find yourself in Central Park it’s a pleasure to walk, and the park is absolutely huge and it’s the place to spend a bit of time there. You get a real vibe of the city from a couple of hours exploring the park. Walking from one end to the other is cool and you see the apartment buildings surrounding which is a great view of the heart of the city.

Then suddenly you are in Times’ Square, and the downtown area. Highlights of New York include catching Broadway Show, seeing the Statue of Liberty, going to the top of the Empire State Building (the views are totally amazeballs), trying to get into one of the late night shows, the Guggenheim, the Met, oh and the New York Public Library.

Then we turn to Rome. St Peter’s. The Vatican. The Pantheon. The Trevi Fountain. The Spanish Steps. The Colosseum. The streets. The mopeds. The Roman Forum. You walk down a street and off to the side you see some columns, plenty of little reminders abound to say ‘You are in an historic city’.

Both cities have a real buzz about them. A different buzz, mind you, but a buzz all the same. I backpacked both in 1999 and in both cities I found myself with a cool group of people who went to places together. I had one brilliant night in New York returning to the hostel at 7am. The group in Rome was more focussed on the sights, but both cities are pretty posh and fashionable when it comes to the nightlife I guess.

At the end of the day on this one I will go with New York City for the win. I think you’re more likely to go to Rome to see the sights. But whilst there is plenty to see and do in NYC, you could just go there and soak it all up for a week without seeing a thing, just travelling the subway and walking around and you would have had an incredible experience. It’s truly one of the world’s most epic cities, and I hope I get to go back again a few times before my life is done. Thanks for reading today, what’s your take? And of course – May the Journey Never End!