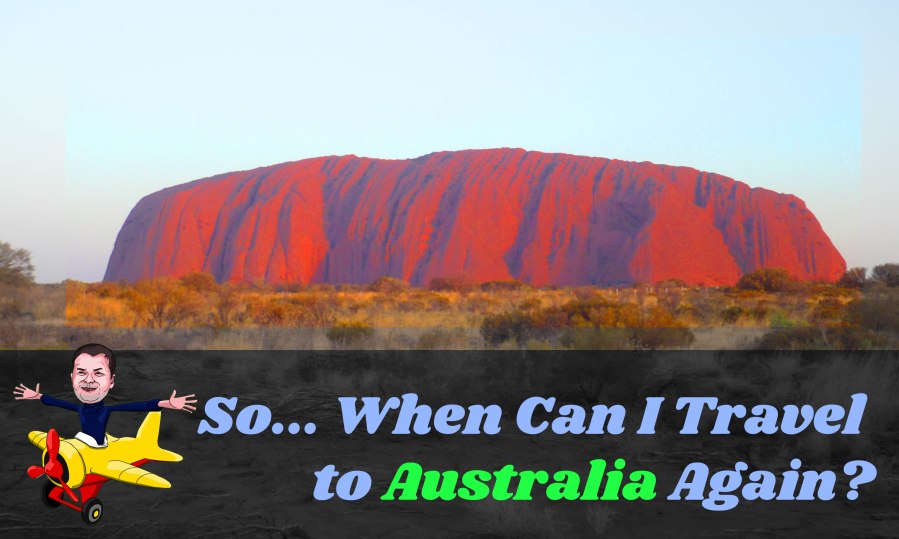 Folks, I can’t help but notice all the flippin’ travel going on in Europe. Less so North America, although I have certainly seen some people flocking to Mexico, but over in Europe, well, it seems a free for all like there was no pandemic to begin with. Of course, it’s different from country to country. But above all the destination which has had a tough border policy and lockdowns and still does, is my country, Australia.

And to be honest, most states are okay, but the state borders are pretty much all closed. There is slow movement on that front, but ultimately the country’s borders are firmly closed at this stage. They let people in, yes, with permits and reasons, mostly Australians, still ‘stranded’ overseas, because the number let in is very limited. In fact, it’s 5000 or less a week. And everyone has to do, and pay for, 2 weeks of hotel quarantine. Which is upwards of over $2000AUD. It seems like we are a long way from having tourists back on our shores.

Victoria, my state, and in particular the state capital where I live of Melbourne, has been even tougher. We had a spike in cases, I think it was the end of July. We had I think three days of over 700 new cases reported. While the rest of the country, by state, was recording new cases in single digits, Victoria’s was ‘skyrocketing’ in comparison. I know the numbers don’t compare with other large outbreaks in the world, but here in Australia it was enough to ostracise us from the rest of the country.

Which has mean a relatively hard lockdown now for over 8 weeks. We are looking to pull back as of the 19th of October, a date not far away as we have it back to single digit numbers again – because we did have it that low. Perhaps interstate travel will be possible again by the end of the year.

Meanwhile, New Zealand are in talks to have a travel bubble between our two countries before Christmas. It may just be New South Wales at this stage, hard to say, there’s probably a good chance Victoria won’t get considered, but who knows where we might be at the end of the year. But if you had planned to visit Australia this year and missed out and were wondering when we might open our international borders again, well, the answer is not known at this stage.

What we do know is that our Prime Minister, Scott Morrison, has said that he’s looking at March at the earliest, 2021. And if this was to happen, and it’s unlikely, there would be limited numbers and I’m not sure if it would include holiday makers. It may be open for immigration, I don’t know. But I would say that if you are hoping to come to Australia, don’t plan to before the second half of 2021 at the absolute earliest.

Even if this vaccine does materialise, and for sure we hope it does, it’s going to take some time to be distributed, and then enough of the world’s population to become immune before any steps can really be taken to open the planet up again. It seems incredible to me that they can’t get a vaccine for the cold but they can find one so quick for this disease that wasn’t known to exist less than twelve months before today.

Australia has been one of the most cautious countries too, and we have always been ultra-paranoid about our borders and letting any sort of bio hazard in. That’s why most food stuffs aren’t allowed in. The Australian version of ‘Border Security’, the somewhat racist show where people are screened coming into your country, is full of people from a certain part of the world trying to bring fruit and vegetable matter in from their country and getting caught not declaring it and then being in serious trouble. So our government is unlikely to turn on a sixpence and open the airports to all and sundry.

And equally I should say, we’re not allowed out unless we have special reasons and a permit of some kind. As I write this I am only allowed out of my home to work (essential services), for 2 hours of exercise, a medical appointment or for essential grocery shopping. Some of that is due to be eased on October 19th though. But we hold our breaths should the case numbers rise again.

Thanks for reading today – take care and May the Journey Never End!

12 thoughts on “When Can You Travel to Australia Again?”