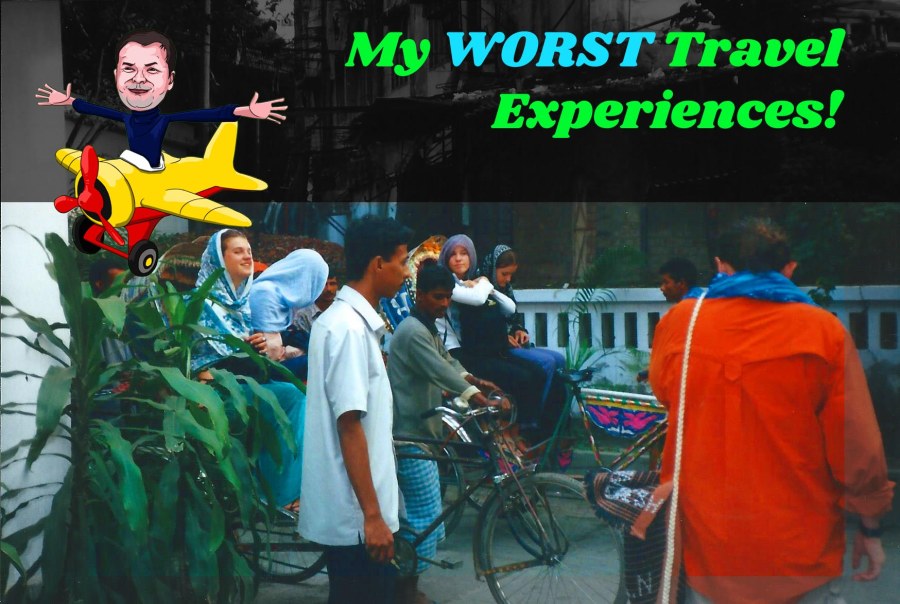 Yes, it’s another one of those ‘reflective’ posts where I may or may not have learnt a lesson or two whilst travelling to a certain destination. Or two. I was inspired (inspired? What the) – no not inspired, the idea came to me after watching a certain viral youtuber/vlogger doing a video on their SCARIEST travel experiences. I thought, I should do a post like that! It would be interesting to write and hopefully to read!

BUT – look, I’m not going to say I haven’t had scary experiences whilst travelling. I have. The more you travel the more chances you have to find yourself in a situation you might want to get out of asap. But I think to say an experience was scary, then I would be in a situation where I was genuinely concerned for my safety. As in – my life. And I don’t think I’ve been there. Ever. Maybe I’m being naïve, I did contract malaria once. Oh wait, yes there was one time…

And yeah so here in one instance when my life was genuinely on the line for a moment or three. 2002, on a university trip to Bangladesh, and I sample a local chicken curry. For those who don’t know, I have a reasonably severe allergy to peanuts. Actually, it’s a hard one because so many cuisines use peanuts in their dishes, the odds of me facing peanuts in something I’ve eating is quite strong all in all. And I’ve had reactions – anaphylaxis – in many different countries from the UK, to Japan, and also as it turned out, Bangladesh.

In fact, 2002 was when I became aware that a peanut allergy could actually be really dangerous. In fact I’d spent all my life up to this point, and I was 27 at the time, thinking all that happened to me was I would vomit a bit and it would be over. I had seen my GP and specialist earlier in 2002 itself and was informed it was life threatening, which I honestly had NO IDEA ABOUT. I know it seems ridiculous. I still wasn’t convinced, but I had an EpiPen and some anti-histamines with me wherever I went at home or abroad from 2002 on. And I needed them!

I had some curry at a little curry house across the road from the guesthouse the 20 or so of us were staying at on this study tour. I knew something was up with the curry, but at first I thought it was just a bit spicy. After eating a bit more, I realised it wasn’t the spice, it was a peanut reaction. I made it back to the guesthouse, had an antihistamine and vomited. Then, I vomited again. I started to feel really weak, and I came out of my room to sit with other in case it got worse. It did. I felt like I was fading away. So I had someone give me a shot from the EpiPen. It gives you a shot of adrenaline to overcome the allergic reaction.

From there I ended up in hospital. It was a whirlwind visit to a nearby clinic first and then to hospital where I was in this empty ward. They monitored my reaction for a little while until they were sure it was over. It’s the worst allergic reaction I’ve experienced in my life. I’ve learnt to always start slowly when eating food I can’t be 100% sure about, because it is dosage related. The more I have, the worse my reaction will be. This one was scary and this is as close as I’ve come to dying I would say, in my entire life.

A Bumpy Ride to India

So this one is not really on the same level as the first one, but I want to talk about it because it’s interesting how one bad experience can colour future experiences. In 2001, January, I flew from London to Mumbai with British Airways. Actually, only had good experiences with service on BA, but this flight was quite turbulent.

How turbulent? I expect not the most turbulent I’ve ever had to be honest. But it was my first real experience of turbulence for a prolonged period of time. There was no message over the loudspeaker, and I started to panic internally. I don’t really know why. I LOVED flying to this point. Honestly, getting on a plane was SO exciting.

But after this one flight, I did not enjoy flying anymore. So it wasn’t the actual experience that was problem, but the result of it. From this flight onwards I would always worry and stress over a little turbulence. I will say that these days, it’s not so much a problem. I may have ‘grown out’ of this phase mostly. I’ve experienced turbulence dozens of time since then and I cope with it much better, knowing full well that it is a normal part of flying.

And even before this flight I MUST have experience turbulence before. It’s like I was unaware until this flight. It’s a very weird thing. But it really changed my perspective on flying, one single flight.

The Passport Gets Washed

Finally, my third story today goes back to 2011 when I was living in Georgia with a host family. I was living in a small village called Jikhanjuri, in the Adjara region in the west of the country, teaching English at the local school. I had a room with a local family in there house.

The family treated me like one of their own, it was a brilliant time, and it’s something I’m so glad I did. However, one day my ‘host mother’ if you like, decided she was going to help me out and went into my room and gathered up clothes to wash them for me.

Well, she picked up my trousers, and my passport was in a zipped pocket half way down the leg, which probably wasn’t very obvious to her, and not only did she wash the trousers, but she washed the passport too. It did not come out well. In fact it’s fair to say, this passport was now next to useless.

Somewhat amusingly this wasn’t the last time my passport got washed and destroyed, but this was the only time it happened whilst I was overseas. To this day there is no Australian Embassy in Georgia. I was lucky in the fact that I wasn’t leaving Georgia for another 2 months or so, and could organise something. Workers from the Turkish Australian Embassy would visit Georgia once a month I think it was, and so I organised to go to Tbilisi at the same time and got an emergency passport, which got me back home when it was time to head home. But boy, it was a stressful experience. It’s not really what you want to deal with when you thousands of miles from home.

Put this all in Perspective

I know none of these seem like HUGE deals. Which is why I don’t feel like I’ve every had a really ‘scary experience’ when travelling. Although, almost dying probably counts. I’ve deliberately not included my time with malaria in West Africa. I’ve already written about it on many occasions, and although it was definitely a nightmare, it’s something people in that region have to deal with as a matter of the every day.

Read about it here –

A Date with Malaria Part One

A Date with Malaria Part Two

A Date with Malaria Part Three

Travel can put you in harms way. I’ve never been the victim of robbery by assault – I met a couple in Ecuador who had been robbed through a taxi window on their first night in South America. I haven’t found myself in a riot or civil unrest. And that’s a good thing.

Thanks for reading today. Have you had an experience that was memorable whilst travelling – but not for good reasons? Please – I LOVE to get comments! Take care, and May the Journey Never End!

13 thoughts on “My Worst Travel Experiences”