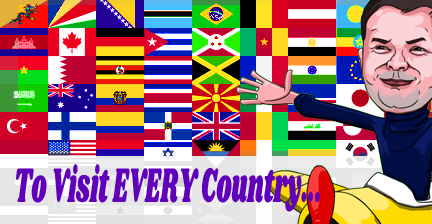 Hi folks, Andrew here from Andy’s World Journeys. Yes, Andy is fine. And I hope that this post finds you well. So recently I was doing a bit of time wasting looking through travel vlogs as you do. Well, you may now, so as ‘I’ do. The world is full of so many amazing destinations, and Bald and Bankrupt has been to some of them. Most are Soviet. Or near Soviet – eg Cuba. Or Mauritania which I’m not sure which category you’d like to put that country into.

I actually found it interesting to see that I really find it hard to get into many people’s videos, Bald and Bankrupt seems to be just the right mix for me, but I did stumble onto a channel by a ‘Drew Binsky’. Drew is an American, although that’s not his real name, and he has travelled to nearly every country in the world. Ahhh that old ‘chestnut’, to travel to every country in the world. And he has been planning to do it by the time he’s 30 or something. I’ve met travellers who don’t have a high-profile YouTube channel to claim to be going to every country or indeed to have already to achieved this feat, and so I thought this might be a good topic of conversation.

So my tag line is, you might have noticed, ‘travel, experiences and video from 84+ countries and counting’. That needs a tweak it could be better, I should have realised that at the time. So anyways, I hope I can say that apart from this line I don’t generally go around telling people how many countries I’ve been to. It’s not as if we’re all in a global race to visit the most countries or whatever, right? I just was looking for a line to sell the blog. Or me I guess, as that’s what marketing these blogs and vlogs is apparently all about.

Back to Drew Binsky, he has 4.7 million subscribers, hails from the USA, is somewhat annoying and, most importantly, is a couple of centimetres shorter than I am. This year he was to complete his goal to reach all countries by the age of 30. Coronavirus has hit, and I don’t think he’s been able to get to his last few countries which he listed somewhere… Palau, Jamaica, Ghana, Saudi Arabia, Ecuador & Venezuela. He was going to make a film about these final five countries, interestingly none of which are next to each other. His videos are very polished, like a silky ‘Getaway’ style program. He’s uses drones as well and… sigh. Well, it’s got him 1.4 billion views and I’d say he makes a nice ol’ amount of money from Youtube.

So anyways, would YOU like to travel to every country in the world? I mean, I guess I would like to SAY I had travelled to everyone. But frankly, there are places in the world that are just too risk-adverse. I know people go to Syria, Yemen, Afghanistan and Somalia, but if you’re in a place where people are under threat of death daily, what must people think of you as a tourist? Like, it’s almost like you’re taking the micky. ‘Well I’m here in downtown Mogadishu so that I can say I’ve been to every country in the world! How are you?’ – ‘I’ve never left here, we don’t have running water, etc etc’. Like you’re just TAKING THE PISS.

All About the Journey…

Even I realise that of my 84 countries, well, I haven’t thoroughly explored any of them. Not like living in one for a few years and getting to know it inside and out. Heck, I can’t say that about my own country. I do go back to places I have an affinity for – India four times, UK four times, Russia three times, Japan… not sure, six? And I’ve been to different parts of these countries, but still it’s only scratching the surface. I do like the journey in travel, as I’ve mentioned before. For me I enjoy just getting from point A to point B.

And if I’m near a country I might pop in to say I’ve been there. As a taste – to see if I’d like to go back and invest more time in a place. But where I’m at in life now, there isn’t a lot of scope for this. But who knows, maybe in 20 years I might decide I might as well try to visit every land on Earth. And then the question becomes… How many countries are there actually on the planet?

What Makes a Country, a Country?

This is not as simple a question as you might think. You have to take your list from somewhere, because some places claiming nation status are not acknowledged by all. Google it and the answer is 195. The United Nation recognises 250 countries and territories, the USA less than 200 apparently although why that should be a marker for anything I know not.

The UN recognises the State of Palestine as a country/territory, and I’d go by that personally but then that response might be considered controversial. After the fall of the USSR there are a number of ‘rogue’ states if you like that claimed independence from the countries they were part of. South Ossetia and Abkhazia for example from Georgia. Nagorno-Karabakh is a breakaway state from Azerbaijan and you might know of Transdniestria which broke away from Moldova. I’m unsure about Nagorno-Karabakh but the others are recognised by Russia and few, if any others. In fact it was Russia that backed their independence.

Even here in Australia we have (or had, I think they are officially dissolving now) the ‘Hutt River Province’ which claimed to be a separate state (as in country) from Australia. Then there is the micro-nation of Atlantium. Interesting ideas, check out this little video about Atlantium. Maybe I should see if I could visit!

Palestine, Kosovo, Taiwan, Western Sahara, South Ossetia. Abkhazia, Turkish Cyprus, Transdniestria, Nagorno-Karabakh, Republic of Somaliland are all places that profess to be sovereign states but are not recognised by enough UN Nations to be counted as nations. Surprisingly perhaps, Taiwan, recognised until 1971 as a country, is today only recognised by 11% of UN Nations. There are 206 Olympic Nations and 211 countries eligible for the world cup. Information gathered HERE – from ‘WorldView/Stratfor’, also were I got the graphic.

So, if you were to set the goal I’ve been discussing this post, you would have to decide in YOUR mind what constitutes a country, as world organisations do not seem to be able to agree. So good luck with that!

Flipping, Because well… Goals are good!

And now I want to flip, because I’m not really against the idea of visiting every country per se. I met an older couple back in 2011 in Almaty whilst waiting for an Uzbek visa who had been to over 200 countries. So that means I guess they defined ‘country’ more broadly than the UN does. But it is an achievement, and of course, a blessing. To be ABLE to visit so many places in your life, to have the means, the health, it’s really a blessing because so few of the world’s population are able to. And goals are what drives us to succeed, to push the envelope, to go further than we thought we could and that’s surely a good thing.

Other smaller goals people set are great too – one girl’s (which she’s already met) was to visit 100 countries by the time she turned 25. She’s also turned that goal into a successful YouTube/vlogging career. To make 100 countries by 25, when I was just heading off for my first solo trip (well, I was 23 actually) is an amazing achievement. But in such a short space of time, it’s also really packing it in.

Of course, if you become a successful Vlogger on YouTube, you can sustain yourself in travel as a career. We are talking about over a million subscribers and over a billion hits. Sadly, it’s not happened for me but then I don’t produce videos twice a week either. It’s a catch-22 situation because you’d need the material to fund yourself to get new material. And the work needed to maintain constant videos, and especially to kick start yourself, is enormous and as much as I might find Drew Binsky annoying, he’s worked so hard and produces very slick and professional videos.

And for Bald and Bankrupt, who by the way I don’t think has sort of goal of visiting every country, he knows where he likes to go and returns and returns, he works hard too even if the videos don’t have the polish, and his personality and what he actually does – seeking adventure – is the reason his channel is so popular. I’ve seen others too out there travel blogging with success. And I have to say I understand less why their channels are so popular.

Ultimately, for me, right now visiting ‘every country’ is not on my radar. Perhaps 100 is the next goal I will look to. It’s not THAT far away, but I won’t be adding to my 84 this year and next year is very unlikely. If we head to Japan, maybe I will have a stop somewhere, so maybe Taiwan or South Korea. But the way things are, that’s a big ‘if’.

As for Drew, I wish him luck on his final six countries. He may have gotten to some of them, I don’t know. I’ll keep an eye out but I won’t be actively looking. Perhaps in retirement I can draw up a list and start crossing countries off. Or not. I’ll take it how I find it.

Thanks for reading today. How do you feel about it? About lists? About seeing every country? And about what actually IS a country? Personally, I would count Taiwan, Kosovo, Somaliland and a couple of others at least as their own countries. Atlantium not so much. But who knows, I might see if I can visit this fair nation. Thanks for reading, May the Journey Never End!

18 thoughts on “To Visit Every Country in the World…”