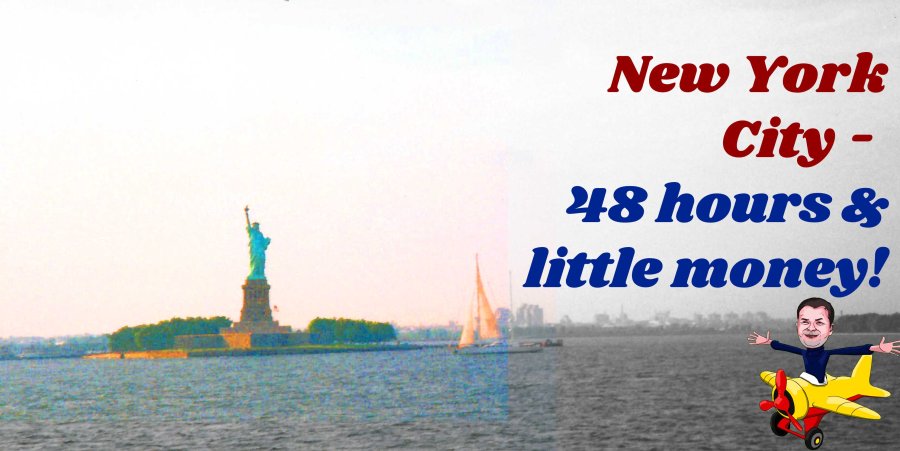 Ok all, happy New Week to you! And today’s idea is to imagine this – you have 48 hours, a weekend if you like, and you’re going to New York City, one of the world’s great destinations. What exactly can you cram in in those 48 hours? On a budget too? Or more to the point… what would I cram in? Pretending that I haven’t been there before of course! Do not pass go, do not collect two hundred dollars! This message will self-destruct in 20 seconds….

Okay sorry, took a Valium. But here’s the thing, sometimes ‘slow travel’ is not an option. Sometimes those of us in this world lucky enough to be able to afford to travel (I like to remind myself how lucky I am in whenever I can) don’t always have the ability for a range of reasons to stay somewhere for a week, especially somewhere like New York which is a little pricey when it comes to places to stay.

The solution? Get in and get out. See and do what you really want to and then flee for somewhere that’s cheaper. Find yourself a decent accommodation, as decent as you can, but don’t worry too much because we’re going to be out and about most of the time anyway. You COULD fly in at the crack of dawn on the first day and leave late at night on the second, choosing to party on your one night in New York too. But that’s definitely something for people who are younger and more energetic than I.

The thing about New York is that, although it’s not so cheap, part of the thrill about the city is just being there. Which means you can experience New York by exploring on foot or by the Subway. As iconic as the ‘New York Cab’ may be, it’s not as iconic as the subway, which for little money can get you around from place to place in pretty decent time. But as I say, foot power isn’t a bad option either and you’ll get sights, smells and life by the bucket load.

But… Where to Start? Let the two days begin!

Yes you’ve arrived. Be it by plane at one of New York’s 72 airports, or by bus or train. You probably don’t drive, I mean where will you park for starters? You want to get to downtown Manhatten as quickly as you can because starting any later than 9am is going to make this even harder.

Day One – Statue of Liberty, Wall St, Times Square and a Show

So you want to grab the Staten Island Ferry and take it return. This is going to get you a view of the Statue of Liberty. Of course, there are also ferries to the statue itself and you can go inside, but those cost a bit of money where as the Staten Island Ferry, according to the interweb is FREE. You may need some sort of Metro card, I’m not sure.

From this ferry, and it takes a little while, you will get a decent view of the statue. I had an old film point and shoot when I took it, which is why it looks so far away in my photos, but in all fairness it ain’t THAT close either, so you’ll want some sort of zoom. You will see the New York City skyline from out on the ferry, and that’s pretty awesome. Catch the ferry from the Whitehall stop on the Subway.

You get back to New York City and hopefully you’re in the ‘Battery’ area, which can take up some of your time if you are so inclined. You’re not far from Wall street if you want to walk past the stock exchange. You can’t visit it these days after 9/11. You can see the bull and get a selfie by it should it take your fancy. You can see the memorial though which is also in this district. There’s also a tribute museum, and in this area there’s a museum to the Native American which I haven’t been to but could be very interesting.

If you’ve done all that, it’s probably well past lunch time. Why not try a New York hot dog (or two?) from a stand? And head on up to Times Square. By now the sidewalks are absolutely packed with people. It’s quite a little walk to get there so the subway is again your friend.

Here you should be able to find a booth where you can pick up discounted tickets to a Broadway show. ‘Hamilton’ has been popular over the last few years, but it’s available on Disney+ now, and there are always a wide choice of shows (I saw ‘The Producers’ before the movie was announced which was AWESOME). Of course, right NOW August 2020, I don’t believe there are any shows and the museums are all shut. This is for the day we can ‘travel again’.

Explore Times Square and get that selfie you KNOW you want. Penn station is a few blocks south back the way you’ve come from, but if time allows either before or after Times Square, pop on down there because it’s another iconic landmark. Find yourself some dinner too, before your show. There is no limit to the cuisines available in New York City. Splurge on Hell’s Kitchen New York if you must, or perhaps if a Seinfeld fan you’d rather give ‘Tom’s Diner’ a go, the diner on Seinfeld was based on that diner.

Enjoy the thrill of Broadway! 42nd street is one the most prolific streets for musical theatre, and you might catch a little look at the Chrysler Building too, another New York Iconic landmark with its metal top. After the show, time to crash at your hopefully not to expensive lodging for the night.

Personally, I stayed at hostels when I visited in the past. I probably wouldn’t again cos I like my own space, but this is your best bet. I stayed in Brooklyn and it was around $25USD for a bed for the night, but I should stress that was a LONG time ago. I can’t even find either of the two I used on a map these days, they probably don’t exist. I was mostly joking earlier about just staying up all night, but if you can do it, I partied a full night back in the day and took the subway back to the hostel after the sun had come up. But even in 1999 I wouldn’t have been able to do much the next day.

You’re going up up up today! Start each day with a great city view. Luckily, you’re already in a great city! So it’s time to go up the Empire State Building. Look, we’re trying to keep to a budget here, but frankly it’s the EMPIRE STATE BUILDING, it costs $30USD plus tax, and it’s worth it. Well, some would disagree I’m sure. The views are incredible, as are the stories of how the thing was built. You can tell my pictures are old because the twin towers are still there. Get in early because everyone wants to go up in the lifts and the lines can get real long real fast.

Now it’s time to really explore. To one side of Manhattan Island, where you’ve been all this time by the way apart from your time on the ferry, you have the Hudson River, on the other side is the east river, try and see them both. They aren’t that far apart really, obviously converging at the pointy bit of Battery Park but you’re not going that far downtown AGAIN. Also, the New York City Library is pretty awesome (and free!)

Shopping perhaps? Window shopping that is – Tiffany’s is yet another ICONIC place in New York, then there’s Macys which I haven’t visited but you hear plenty about. You might want to try Bloomingdale’s too, and who fancies a photo of the Rockefeller Centre or indeed, TRUMP TOWER? (C’mon, you know you want too!) There are obviously hundreds more shops to window shop at, and then it’s lunch time. There’s a fair Korean contingent in New York, why not look for some lunch in ‘Korea Town’?

Now you want to go a bit north, the rest of your time in New York is going to be centred around it’s biggest, best and freest feature – Central Park. It’s really quite magical, a huge park surrounded by apartment buildings, TALL apartment buildings. You could easily lose days in Central Park. You have access from here to the Guggenheim Museum [FREE 5pm – 9pm on Saturdays otherwise $25USD], and City of New York Museum [$20USD – but free with City of New York card], the former being world-renowned as one of the finest there is. But there are lakes and bridges and spots in this huge park to explore, it stretches from 59th street to 110th street, that’s 51 blocks.

Folks, grab some dinner and head on home. To the airport, by bus or train. You drove? To NYC? Are you crazy? Probably. We all are. Whew. If you can pack all that into 48 hours, I salute you! And as for the cost? Well, it’s New York City, and I’d say if you kept it to $200USD including accommodation you really haven’t done too badly.

What would you include? Let me know!

Thanks for reading today – and May the Journey Never End!