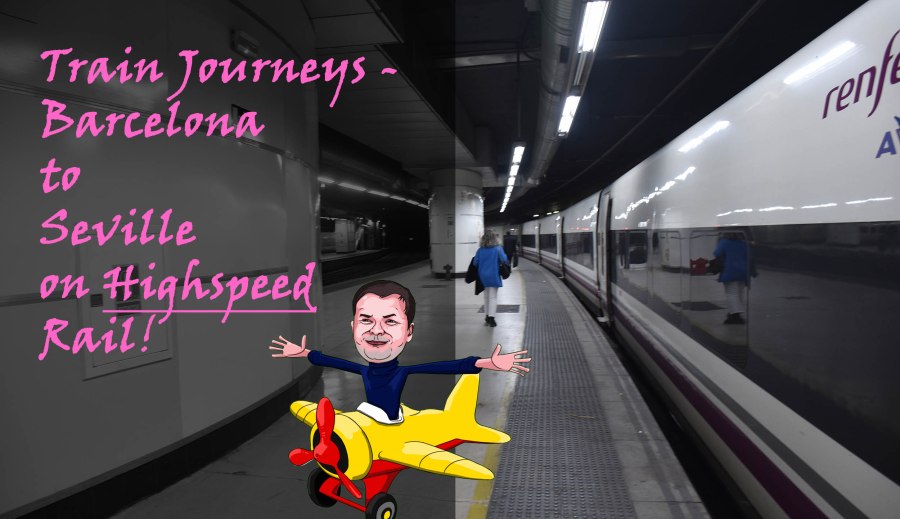 Yes folks, it’s time to get your tickets and board another train with me! Today I’m taking you from Barcelona, Spain’s most visited city, to the jewel of the south (in my opinion!), Seville! From one great city to another, last year when I visited I was able to make the journey by the fastest train they have connecting the cities.

I prebooked the ticket a couple if months in advance from Australia. It’s probably the way to go (the prebooking part, not the from Australia part) as these days trains get filled up pretty quick and it’s something like half the time of the regular train which takes around eleven hours. Of course, I expect the regular train is a lot cheaper. We paid around 70 Euro per ticket for this train, which travels at speeds of up to and occasionally over 300 km/h and the distance is around 830 kilometres. Which is does in five and a half hours. So if you do some maths, it’s not travelling 300 km/h for much of the journey but still, at five and a half hours it’s the way to go, and frankly, 70 Euro (advance purchase price I think) is actually really decent value for money. I booked through a website called ‘Loco2’, and they seemed to be pretty decent. Still, I presume they take a percentage off the top.

It would be a little over an hour by plane, but factor in getting to and from airports, check in, security and all that you are probably looking at a faster overall experience on this train.

The station experience in Barcelona was a bit push and shove. Getting off the metro there was a walk through some tunnels before arriving at the station proper, and then we needed a ticket to get onto the platform. This is where the lining up could have been better organised as it was a bit of a bunfight to get onto the escalators.

The train arrived at Barcelona a little late, only a few minutes, and then for some reason it’s like a mad rush to get into your carriage. The seats were comfy however, but the carriage was super-heated which was very odd. Next carriage along was the restaurant/café/dining car which was handy, and that carriage was kept a lot cooler. As the journey went on our carriage eventually cooled down a bit. Not sure if it was because it was next to the cooler restaurant car, if it’s a deliberate temperature control thing or what. Nevertheless, stripped down to a t-shirt at the start and an hour in was putting layers back on.

The train starts by going through a few kilometres of tunnel before springing out onto the surface of Spain. I expected the scenery to be flat and brown, but in fact it was quite varied. There was plenty of greenery, and it was great to get a sense of Spain outside a city, as we were spending all our ground time in either Seville or Barcelona.

I presume that we climbed quite a bit during the journey because at one point we were going through clouds. The restaurant car’s fare was limited and pricey, as one would expect, but good for a cold drink nonetheless. We were very comfortable in our seats, and I should add that we were in ‘standard class’, and I dozed off for quite a bit of the journey.

It’s great that highspeed rail is so comfy, really. Same in Uzbekistan, very comfortable and generally when you travel on highspeed rail that’s how it is – the Shinkansen for example is a really comfortable ride. The only exception I have experience sadly is the Eurostar, where the chairs are decidedly cramped unfortunately which tends to put a dampener on what is otherwise a pretty amazing journey. To be honest, you’re second/standard class seat is like flying Tiger Airways.

The approximate times for this journey were leaving Barcelona at 830am and arriving Seville at around 2pm. This was the fastest time available. There are many trains between the two cities and their times vary from 5.5 hours up to over 11 hours.

Personally, I think this has to be the best way between the two cities. Sure, I love rail but a bus wouldn’t be anywhere as quick and flying is a lot of hassle and as I said, probably overall takes you longer from one hotel in one city to your next in the next! Train as always offers you the chance to get up and stretch your legs, toilets are clean and bigger than those on a plane. Did I mention how trains are awesome?

Thanks for popping by today, take care, and May the Journey Never End!