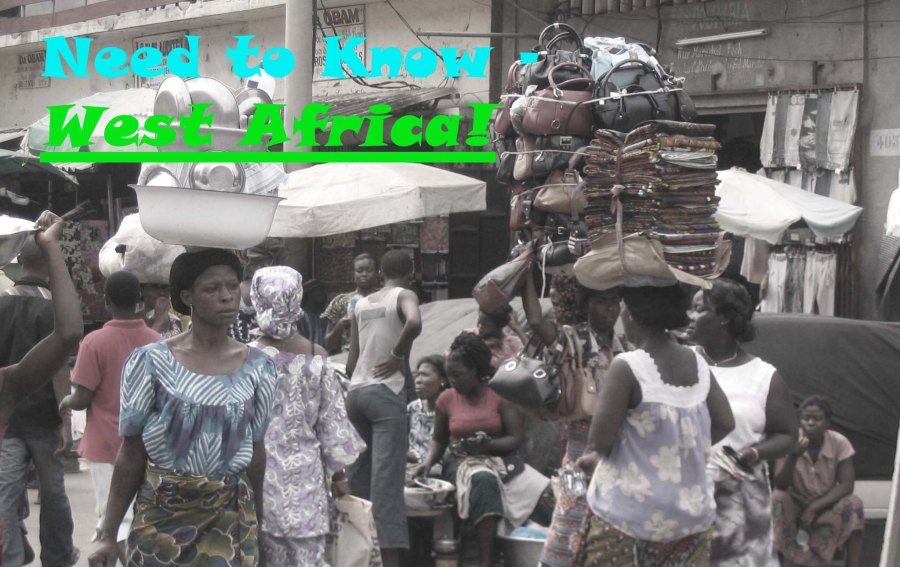 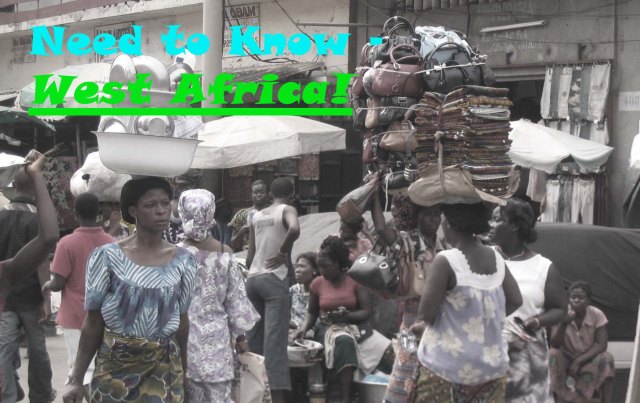 Hi all – another ‘Need to know’ this time on a part of the world you may not have considered visiting. Although West Africa lacks the east’s game parks, wildlife etc and received much fewer visitors per year, it is a genuinely vibrant and exciting part of Africa and one that deserves more visitors. If you are looking for a bit of a travel challenge, well West Africa might be the place for you as there isn’t the tourist infrastructure you’ll find in countries such as Kenya or Tanzania, but the sense of adventure getting around this part of the continent is hard to match!

I have been to 8 countries in West Africa – Senegal, Mali, Ghana, Burkina Faso, Niger, Benin, Togo and Cameroon. The first thing you need to know, my favourites were Mali and Cameroon. Having said that, Mali is a bit of a ‘no-go’ zone these days, and areas of northern Cameroon have been locked in a bit of a Anglophone versus Francophone tussle as well making it wise to reconsider travel there. Burkina Faso recently has had its issues too.

But that doesn’t mean the whole region should be off your list. Certainly not! In fact there are a bunch of other countries to consider if, like me, you like to check out a few in one trip. Cote D’Ivoire, Sierra Leone, even Liberia, which when I was in West Africa first off was just getting on its feet after a long civil war, might be interesting. Nigeria is a big one too, obviously, and I don’t think should be ignored a possible destination. There has recently been an influx of Nigerian travel bloggers online showing off their country, and although I’m sure there are ‘no go’ zones, it’s a large and varied place. Then completely surrounded by Senegal is the long but thin ‘The Gambia’, often chosen as a ‘taste’ of West Africa by those popping in from the UK.

You will probably need a visa.

But this is a ‘need to know’ sort of post, and so I should get back to that! Firstly, visas are required by most nationals for most countries in West Africa. When I visited I was able to get the ‘visa-entente’, which gets you into Burkina Faso, Cote D’Ivoire, Benin, Togo and Niger all on the one visa. As far as I can see it is still possible to get one today.

Otherwise it’s a repeated process for each country. I got my Ghana visa before I left and then got other visas on the road in the first trip. The second one I had to go to Burkina Faso unexpectedly and found myself in the middle of nowhere 3 hours out of London in some guy’s shed for that one. The Nigerian process can be started online. The prices vary but I believe Nigeria is one of the most expensive if not THE most expensive of the region. Get your visa processes started as early as you can!

Due to colonisation from the UK and France, most countries in the region have either French or English as one of their official languages, and with Cameroon it’s both. Senegal, Mali, Niger, Burkina Faso, Cote D’Ivoire, Guinea-Bissau, Togo, Benin and others have French as an official language, Ghana, Nigeria, Sierra Leone, The Gambia, Liberian and a couple of others have English as an official language. So if you can speak those two you will get along all right I guess, not everyone can speak the colonial-given languages, and local languages don’t just differ from country to country, but there can be a number of languages spoken in each country.

From what I remember of my time there, Fula was the most common local language in the places I went.

I think a lot of people believe that ‘hey, Africa is poor right? So travel and life is cheap there?’ but it ain’t. It varies from country to country, personally of the eight I visited I found Cameroon to be the most expensive, and when it came to hotels you rarely got decent bang for your buck.

I would say understanding the economics of Africa is a real challenge. There certainly can be quite a bit of corruption, the higher you go up the government the more you might see, but that doesn’t mean that there aren’t a lot of politicians who really care too. But all in all there are some very rich people in West Africa and there are people at the other end of the scale. When you have a meal at a restaurant, stay in a hotel that you think should be a quarter of the price you paid, or take a flight inside West Africa that isn’t as ‘perfect’ as you’d like remember this – doing these things puts you on the same level as the very rich in the region. You are extremely privileged to be able to do these because 90% of the people in West Africa probably never will.

I found Ghana to be one of the cheaper countries in the region, along with maybe Benin. I believe Nigeria is quite expensive though.

It’s All about the Money

West Africa also has a lot of different currencies. But also, groups of the French West African countries have teamed together to create the CFA. There are, I believe, two different kinds of CFA, both of which are tied to the Euro at around 660 CFA per 1 euro. One group includes Cameroon and Gabon and I think Central Africa Republic and a couple of others. Burkina Faso, Niger, Senegal, Mali, Togo and Benin all use the same CFA.

Countries with an English colonial past all have their own currency. The Cedi for example in Ghana and the Naira in Nigeria.

Getting around is half the fun!

Well, it can be challenging to your bum and lower back! But transport varies from country to country, but the ‘bush taxi’ is a constant. Usually a mini-bus with as many people inside as they can squeeze, they usually don’t leave until bursting at the seams. Then they stop for anyone and everyone. A faster alternative (but more expensive) is a shared taxi, which will take four or five people and go much quicker on the roads.

Buses are the cheapest option of the road transport choices. They vary greatly in quality and as fun as the cheapest buses are, after a couple of journeys don’t be ashamed to have a preference for the ‘VIP’ buses, as they will be a lot more comfortable. Best bus story I have – heading from Segou to Bamako in Mali on a big ‘VIP’ bus, it broke down 20 km from the end and everyone had to work out their own transport from the side of the road. Hitched on a truck!

Trains sadly are not the region’s ‘forte’. There is one from Cotonou to Parakou in Benin, the only train I took in the region, and there are trains in Ghana which no-one seems to take as they are far slower than the road options. There used to be an epic train journey from Dakar to Bamako, which is not running at the moment and hasn’t for many years. Apparently there is a service from Bamako to Kayes that runs, but that doesn’t even get you out of Mali.

I mean, that’s if you’re not African I guess. The hardest culture shock experience I have ever had was when I landed in Ghana, although I think a lot of that was because I arrived with a bad frame of mind. Being stressed and overwhelmed, believe me, will get you nowhere. Somehow you need to find the ability to ‘chill’ inside you. Go with the flow, like most seem to in the region. Don’t expect things to happen at once. Don’t bring unrealistic expectations with you. Do your best to just take things as they come.

You will see things that shock you, but you will also see life, vibrant life all around if you allow yourself to open your eyes and be okay with where you are. The heat can really knock you about, and it is really as humid as any spot on the globe. So don’t overload your itinerary. Don’t set unrealistic expectations on the place, or indeed on yourself!

So umm, if you didn’t know, I got malaria once when I was in West Africa. Plus, there are a number of different tropical diseases you may be exposed to when there, so be aware and prepare! Any trip away should probably involve a visit to your GP to get the low down on what you may encounter, Anti-malarials are a must, but do not prevent you from getting malaria, merely lessen its immediate impact and give you time to get treatment. Avoid bites as much as is humanly possible. It’s not that easy! Cover up, use repellent and be aware the worst time is dusk and early evening, and dawn as well.

I feel like this one is too negative. Believe me, you can have a blast in West Africa. There are some amazing things to see – the people for one. Mali has the Mosque at Djenne and Dogon country (check for safety) and Cameroon as Mt Cameroon, the Bamenda Ring Road/Hill Country, the seaside town of Kribi and heaps more (again, check the situation). Ghana has vibrant Accra, Cape Coast and Elmina with their forts, the Kakum Jungle and ropeway and loads more. Senegal is just as vibrant if not more, the island of St Louis (actually a town), Ile de Goree, Dakar is an amazing city too.

From Cotonou in Benin there are a few places to reach out too – Ganvie, Ouidah with its history and ties to voodoo. Lome in Togo is actually filled with interesting architecture and is a small but comfortable sort of place. And in Niger, the town of Agadez in the middle of the desert makes for a great stop after an epic journey.

So, don’t waste another second! West Africa is there and waiting for intrepid travellers to try it out! Thanks for reading – and May the Journey Never End!