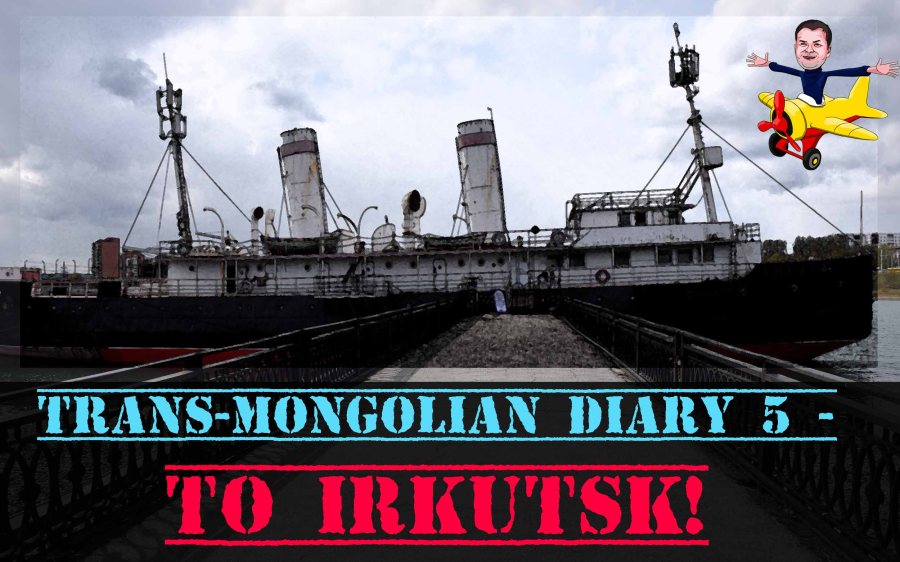 Yessir, I am opening up the ol’ Trans-Mongolian Diary for you again to share my lived experiences at the time of my 2017 journey from Beijing to Moscow via Mongolia. Last week you saw me say ‘goodbye’ to Mongolia and hop the train bound for the Siberian destination of Irkutsk. Today, well I complete said journey and arrive in this town. How will I find it? Read on to find out!

6:10 PM we stopped at Zayagovstoy. Well. now we’re not! A small, industrial looking city. We’ve stopped at heaps of villages on the way. It’s not the fast train. Could see a power station, grabbed some good shots out the window on back door of the carriage. We are the last carriage.Toilet shut and locked. The lady in the office wouldn’t open it for me. We’ve just passed a biggish lake called Gusinoye Ozero – Goose Lake. No I didn’t see any!

8:10 PM sun is down but still a fair bit of light. Many stops, many two horse towns not much to report. Ulan Ude in an hour and a half.

Ah yes, so the updating stopped. Ulan Ude looked like a fair-sized place. Modern, neon lights here and there. We got off and went into the station where we were able to get our tickets printed for the next journey. Big line of pusher inners! I decided against getting the second one done, will do it in Irkutsk. I mean here when I leave for Yekaterinburg. Came back to the train to find it a doubled in length. We took on a lot of people in Ulan Ude – not just another teen carriages but also passengers on the other 10 or so.

Including for the first time a fourth in our cabin. Well, it was nice to have it to ourselves for as long as we did and the three of us are on the same carriage again for the next journey! Not same cabin though. Slept in fits and bursts. Left Ulan Ude at around 10:20 PM I guess maybe fell asleep at midnight might have got five to six hours at best.

Woke to more luscious scenes than previously seen. This was how I imagined Siberia – lots of trees. Anya [carriage attendant] had the lights on shortly after 6:00 AM so we were awake well before arrival. Sorting out stuff folding sheets etc Our new roomie was a surly guy called Yura, didn’t speak English however I was able to ascertain that actually he is a train conductor like Anya!

Into Irkutsk and it’s back to freezing winds! We alighted Anya refused to pose for a photo but after I’m not sure how long we had made it to Irtkutsk!

And it seems a nice place thus far after like a day, despite the weather. The website gave perfect information to get to the hostel sans taxi. We all took the tram as I hoped it would continue onto where Stuart and Nicole needed to go. So I popped and around the back of the building nine as instructed on Lenin street. It was a little along the quite big building and naturally up on the top (third) floor.

The hostel really is very small, not sure it deserves the high ratings it gets from TripAdvisor and Lonely Planet. Not saying it’s bad though. Two dorm rooms with a six or eight beds and a double. One shower – that’s the issue although not very full at the moment. I got two hours of sleep before waking. Wi-Fi lightning fast which is great! Had a shower, moved into the room it’s OK – overlooks Lenin St. Eve, on duty helped me out with a few things including visa registration and then I headed out at about 12:30 to tackle Irkutsk.

I think it got to around 5 degrees Celsius, maybe less. I battled the occasional flurry of snow all through the day. I had checked on the net there’s only a one fast food chain here and it’s Subway! Yeah, didn’t expect that now did you? So I had lunch. Oh also changed my 65 U S at a bank I think I got a pretty good rate of around 57 rubles to the dollar.

Then to the sites, as the cold wind bit into me. Not as bad as in Mongolia, well, not quite. Walked past the Catholic Church to the ‘Saviour’s Church’ Nice enough, plain on the outside no photos allowed inside. Painting looked fairly new. In a bit of I park with an eternal flame burning and flowers etc from yesterday’s V day celebrations.

Just over the road that Bogoyavlenskya Cathedral was more impressive. Very strict on the rules, including no photos. Beautiful painting so new I could smell it! I moved on and walked along the river the Angara River. A load of billboards in a row with pictures of children and dates alongside. I guess they all had died. Sad, maybe have cancer? So then I was led to the Moscow Gate – a replica of a different gate I guess where boats I guess were dock when coming to town. Probably pre-revolution.

After that I continued to the Znamensky Monastery. Except on the handy map I got from the hostel calls it the Church of the High Sign Painter. Very hard to get across the road here – so much traffic! Sort of roundabout and there were just no gaps! I went to a part where I could run to an island then wait for a second gap and made it to the other side. Not much happening there except for the church which again looked beautiful. Lady OK with me taking photos but I only took a couple. One chamber blue, the other gold. Getting back across was even more heavy. Went a different way, counted on cars slowing down. I walked back towards the town bus stop which was opposite this giant mall/supermarket thing. Bit of a wait for a trolley bus number 3 to take me to the next stop the Angara Icebreaker!

It was 20 to 30 minutes through the centre of town to this old ship that used to carry passengers across Lake Baikal from the train – which actually had its own ferry! The lady was nice, started with a movie that wasn’t so inspiring. The museum was boring and light on, however then I got to go down into the belly of the beast it was hella cool!

Back on the trolley bus – what’s the deal? Are they really that environmental and they have been used for, I don’t know, 80 years so they wouldn’t have cared back then about the environment! Anyway, got off at the 130 Kvartal, a small area of town where buildings have been built, restored or faked in this old wooden style. Worth a few snaps – some of the wooden style buildings in Russia are pretty amazeballs, especially the ones that haven’t been restored (in my humble opinion).

After that – well it’s time for dinner plan! Checked out three restaurants from the Lonely Planet around Karl Marx St – not one of them there anymore! So I decided to cook for myself. Excellent Slata supermarket on the same road. Seven days croissants! Ah the memories! Delicious jam/choc biscuits too. Bolognese in a jar, free pasta at the hostel cooked it up and met four of this Russian group (staying at the hostel) – Alina, Ekaterina, Sergey and Yevgeny – nice group quite Alina is the only one who speaks English and we just had a long discussion about life, work and politics.

Thus ended the diary entry for the day. Tune in next week when I taketh the bus to Lake Baikal and see what it’s like at the world’s largest inland lake! Thanks for reading! May the Journey Never End!

2 thoughts on “From the Trans-Mongolian Diary 5 – To Irkutsk”