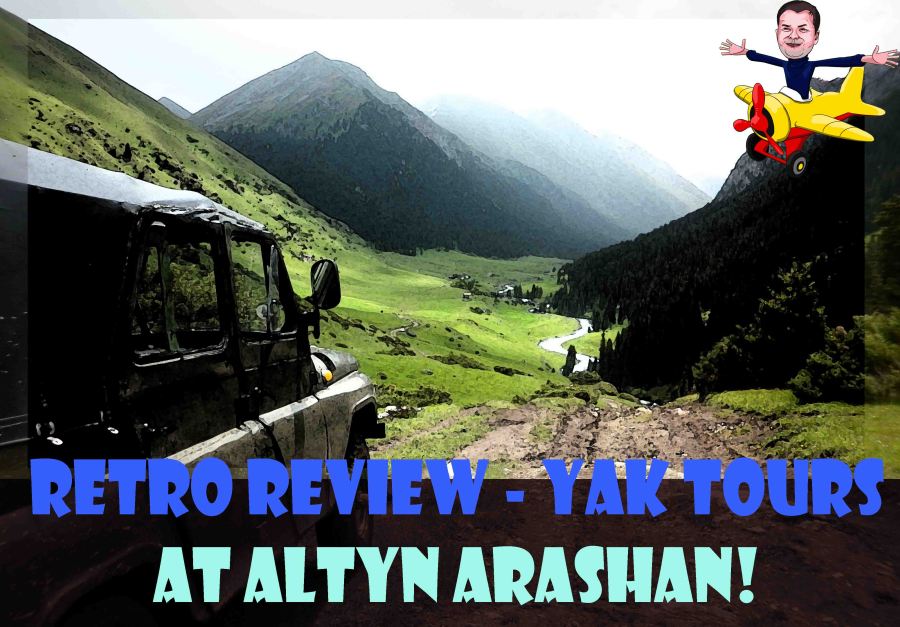 Howdy all. It’s time to turn the clock back, ten years to my last “BIG trip” and look at a memorable place that I stated out during that trip. And today it’s a shack up in the mountains in Kyrgyzstan, at a place called Altyn Arashan, around 30 kilometres by road from Karakol or a bit less (29.8km according to Google Maps, much less in a direct line).

This amazing location is really beautiful, a little valley up in the mountains, snow-covered for at guess around half the year. When I went there it would have been May, and although very cool the snow at that level was not present, in fact it was a brilliant green valley surrounding by higher mountains, snow-capped. From Altyn Arashan there is a hike of a couple days or more return to a glacier which I would have loved to do if I had had enough days up my sleeve – but sadly I didn’t.

However I had heard just how beautiful this spot was and hoped to get there from Karakol. I got in touch with ‘Yak Tours’ and the man who ran (and possibly still does, although he was getting on ten years ago) Yak Tours, Vladamir. A nice old guy, Yak Tours has a hostel in Karakol which is an old house which takes around 20 people at a guess. It’s a special house, very ramshackle with loads of character. Some old vehicles in the yard as well.

So anyway, Yak Tours had a shack up the mountains where guests stayed and so this was at the time really the only place one could stay. But it’s a remote location up a mountain which is reached by a road which is really a track, and ol’ bush track and the further it went up the mountain the worse the track got to the point where you had to be in some sort of four-wheel drive to get there once you’d left the villages below. And Vladamir said someone was headed up there the next day I think it was which worked well.

I found myself with a couple of French guys in the Yak Tours’ Jeep the next day. Well, we waited ages at Yak Tours Karakol before leaving. I was able to stay at the Yak Tours’ shack – but at the last minute some family friends of Vladamir’s had asked to use the shack. Thankfully there would be enough space. My new French friends were camping and heading on to the walking tracks as soon as getting to Altyn Arashan.

We headed up the mountain. It’s covered in trees including pine and this is one part of Central Asia that could really be mistaken for parts of Europe – not that unlike the mountain around the Slovakian/Polish border, or parts of Switzerland/Germany/Austria. The jeep then stopped. There was an issue. The radiator needed to be filled with water and the engine had to be rested so we stopped for 20 minutes. This happened two or three times so the journey took nearly a couple of hours from memory.

The valley though really was fairytale stuff, it opened up and it was wide and green and a little unsteady underfoot in places. The river to one side, there was a small sort of hot spring thing near a shed which apparently is the main reason locals like to come to Altyn Arashan. I said ‘goodbye’ to my new French friends and I parted ways.

The shack was there. There was something iconic for it. Today I can’t even work out if it is still standing as it’s hard to find reviews for it on Trip Advisor and none in the last five – six years. No electricity delivered via wires but Vladamir, who was there, would connect a car battery up to the shack and some basic low-level lighting would be in effect once evening came.

There was an old kitchen on one side, all wood-fired naturally, a second storey where the bedrooms were and a large living room with tables put out for the guests who were having a party that night. And we are talking about at least 20 people with adults and kids. I was just there to enjoy the location, but soon they arrive en masse and boy they took over. But in their defence, they were really friendly despite no-one speaking a single word of English (except for Vladamir) and I was invited to eat with them. The shashlik was delicious. And drinking, there was loads and loads of drinking. And noise. And a guy with night-time army style binoculars I remember.

Of course, I wanted to sleep at some point because I planned to walk back to Karakol down the mountain the next day (which I did do). The place really was held together by sticky tape, and the party went on well after I went to bed. I think I had my own room at the stop of the stairs. It was a bit of a cupboard and once the fires had wound down it got cold overnight, and I’m quite sure if there was a fire that broke out in the house, everyone would be doomed who was upstairs. But despite frustrations at the noise, it’s an experience I remember fondly.

Thanks for reading today! Take care and May the Journey Never End!