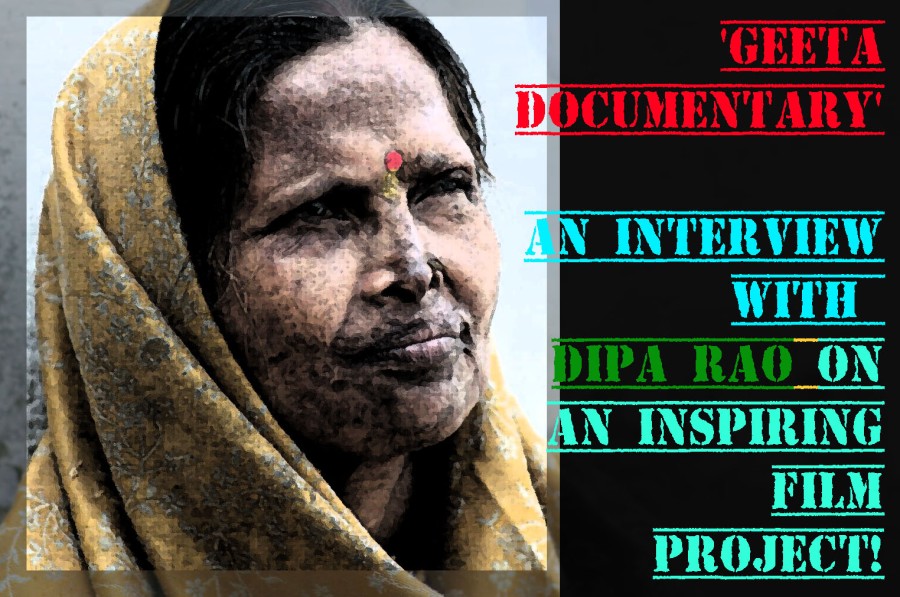 Hi everyone! Today I am really exited to present an interview I have recently done with Dipanjali Rao, who is a friend of mine who has been working over the last few years on a documentary called ‘Geeta’, about a victim of violence in Agra, India. The film I believe is being released shortly, although with lockdowns things have been delayed (Melbourne is presently in the middle of its sixth lockdown folks!) Anyways, I am sure you will enjoy this interview and hopefully you will take the time to find out more about this inspiring story and film!

Hi Dipa! Could you start by telling us who you are and a little about you?

Heya Andy! So, by day I work as  a digital product manager full time, but outside work I’m a writer and artist and am passionate about issues of gender equity. My writing on domestic violence won me and 2 colleagues a nomination for the Our Watch Awards for Exemplary Reporting to End Violence against Women in 2017, which I was absolutely chuffed about.

I’m passionate about feminism and women, and have done a few projects on gender-based violence. ‘Natak Vihar’ in 2017 was a theatre project that explored domestic violence narratives in the Indian community, where I was writer, actress and project coordinator.  I also facilitated and coordinated Australia’s first Anti Dowry summit and worked on two domestic violence primary prevention projects called Poetry Corners.

I train in Carnatak classical music and am also a plant hobbyist! I have about 70 species of Hoya, a plant native to South East Asia and North Australia. I’m getting super interested in native plants now, and am planning to guerilla plant heaps in local nature strips..watch out, Brunswick!

The film revolves around the central character, ‘Geeta’, who lives in Agra in North India. Geeta and her daughter Neetu are survivors of family violence, and the film follows them and the challenges they face while trying to make life better for themselves and other women. The resulting film is an intimate and powerful portrait of survival, and two women’s gritty determination to find independence and shape their own destiny.

Hah, what haven’t I done!! I’ve done a whole bunch of things along the way. I started with doing some writing for Emma, mostly for media, but then did fundraising, crowdfunding, translating, co-ordinating filming in India, pitches to corporates, even backup vocals for the music track!  Officially I am co-producer. Nayana is a social worker and won Hume Citizen of the year in 2017. The film is written AND directed by Emma Macey-Storch, who’s been a filmmaker for nearly 17 years. She ran Film 15, a not-for-profit that worked with disadvantaged kids in Wales. Rudi Siira is the Director of Photography, and has been collaborating with Emma since 2011. When he was approached about the project, he jumped at the chance!

Geoffrey Smith has played a special role, and is our Executive Producer. Geoffrey is a double Emmy award winning director, and he has played the role of mentored and has given the team valuable advice.

Geeta is an Indian woman living in Agra, in India. She is a family violence survivor – she and her daughter Neetu suffered an acid attack, a particularly gendered type of violence, at the hands of her husband and Neetu’s father thirty years ago. Geeta and Neetu however, aren’t what you expect of women facing poverty, pariahdom, patriarchy and dispossession. They are vocal, active, fearless and they face battles, big and small with humour, wit and good humour.

Nayana met Emma while Emma was making Meet and Eat, a docu-series on communities coming together to share their stories with the wider community in Australia. Nayana and Emma share a burning passion for social justice, and they got along very well. Nayana suggested that Emma make a documentary on violence against women, and the rest of history!

The film was shot in India over 6 years. Most of the post production was done in Australia

The film was actually ready in 2019! There’s been a fair few false starts because of Covid, but that’s impacted the entire world. We’re at MIFF this year, so hopefully we’ll be able to see it in cinemas soon!

‘Geeta’ is very unexpected. It has warmth, wit, humour and grit. It shows Geeta and Neetu not as just survivors, but as women living a complex and challenging life, dealing with obstacles life throws at them, seemingly endlessly. It also challenges a lot of what are myths that surround family violence. The myth of what violence survivors are like, the myth of the monster who perpetuates family violence, of how women deal with the aftermath. It carefully, and without judgement navigates the nuances and complexity around family violence without being investigative, and exposes myths without being an expose.

The film itself is raw and thought provoking, and our Director of Photography, Rudi, has captured the breathtaking landscapes of Agra evocatively. Nayana and Emma thought it was best to embed a smaller team into Geeta and Neetu’s world so it was possible to capture the level of intimacy required to tell the story and be true to the complex issues surrounding their story. Through Agra’s back streets, busy household scenes, protests in the heart of the city, family dramas and family celebrations, the film slips into the lives of Geeta and Neetu as welcome guests who are trusted with everything – traumas of the past and triumphs of the present. The whole film is, in keeping with its commitment to truth and openness, suffused with natural light, beautifully and painstakingly filmed with prime lenses and a roaming handheld camera by Rudi. And the result is a story that Geeta and Neetu tell on their own terms – about their power, their victories, their defeats, their vulnerabilities, without filters or mediation.

For now, at cinemas MIFF! Tickets sold out even before they were available to the general public, which is a great outcome! It is also streaming at MIFF, but soon will be in cinemas in Melbourne after MIFF.

Thanks Andy! Best of luck with your YouTube channel!

A HUGE thanks to Dipa. I have the trailer for you above. Hopefully this will interest you enough to see if you can find a way to see the film! Take care – and May the Journey Never End!

Thanks so much to all my subscribers! If you haven't yet go to
From the vaults of my video tapes I bring you a look at the incredible Dom Cathedral in 'A Sniff of Cologne'. Yes I can be humerous when the mood takes me!
Going for a walk is the best I have whilst on short holiday in lockdown...