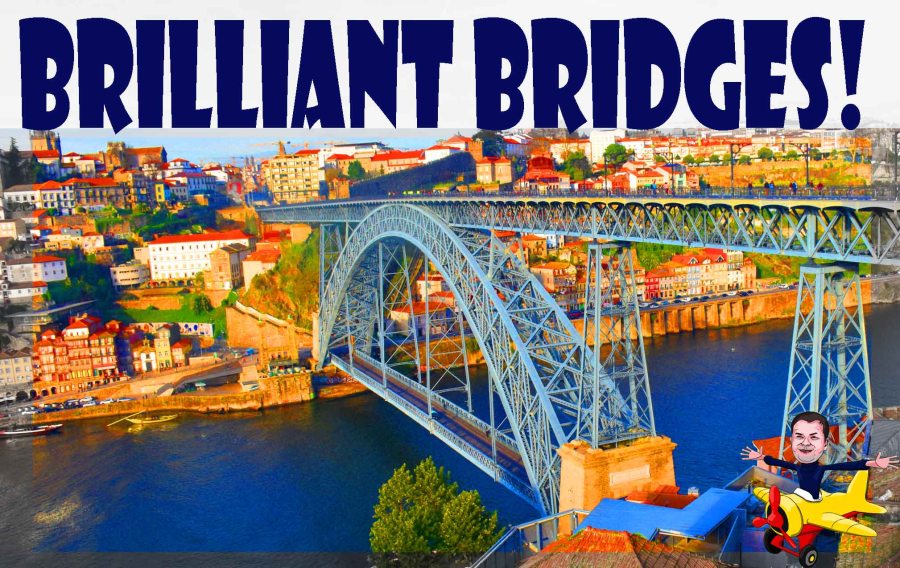 Okay I stole this idea from someone…. it was ages ago now but I think it was Rebecca from Rebecca Goes Rendezvous – great blog do check it out! Some of my favourite things in any destination are the bridges. All over the world you see different ideas, different designs, different ideas from how to get from one side of a river, valley, or whatever to the other side. And as I travel I look out for bridges. I like to look out for ‘Bridge of the Day’ – much more fun when you’re travelling with the right person (hey Paul Remmer) – it all started back in 2004 in Romania when the two of us became increasingly impressed by the bridges, some quite small and simple – that we passed as we roamed the Romanian countryside. So, here are a few I’ve seen over the years, admittedly a little more famous than the ones in the Romanian countryside, that have impressed me.

This is the Tasman Bridge in Hobart, seen from below from the ferry that takes you to MONA. It’s more impressive I guess from above and further away, but interestingly there is an abnormal gap in it because a large ship hit it, bringing down part of the bridge onto the ship and the sink sank, people on the bride at the time and in the boat died. 5th January 1975. The Large Ore Ship sank and couldn’t be retrieved so the bridge was rebuilt reinforced as only one of the two pylons it hit could be recreated.

The Luis I Bridge in Porto is really cool, on both a clear or foggy day. It lives in Porto and crosses the Douro River, and was constructed between 1881 and 1886. At the time it was the longest bridge of it’s kind in the world. It has two levels with cars using the bottom one and the large-tram-like train using the top, and pedestrians are allowed on both parts. In total it is 85 metres high and spans around 395 metres. The designer was Theophile Seyrig.

This bridge is over the Zeyanderud River in Isfahan, Iran is one of a few there made from stone with arches. It was constructed between 1599 and 1602 and is just under 300 metres long, and 14.75 metres wide. Like some of the nearby bridges it used to have tea houses underneath, but no longer does. It is a famous bridge in Iran and it is only for foot traffic, but it still remains very busy, and quite photogenic.

The Gokteik Viaduct is an epic rail bridge built at the very end of the 19th century and is over 100 metres high. It’s 689 metres long, and at the time of building it was the highest bridge of its kind in the world. You take the train from Mandalay or Pyin Oo Lwin towards Lashio I think it is. It creaks and rattles as you go over it and the train is in incredible disrepair, but it’s a very special experience!

The final bridge today is the magnificent U-Bein Bridge, again in Myanmar. It was constructed over the Taung Tha Man Lake in Amarapura 1849 – 1851. It is over 1200 metres long making it the longest of the bridges in this post! It’s also a stunning STUNNING place for a sunset!

What do you think? Any bridges that are special to you? Take care – and May the Journey Never End!