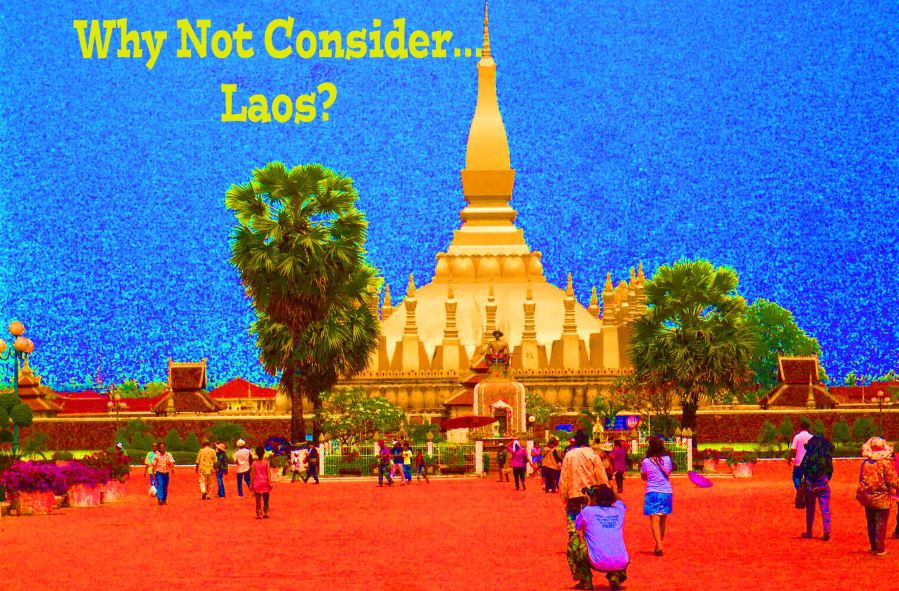 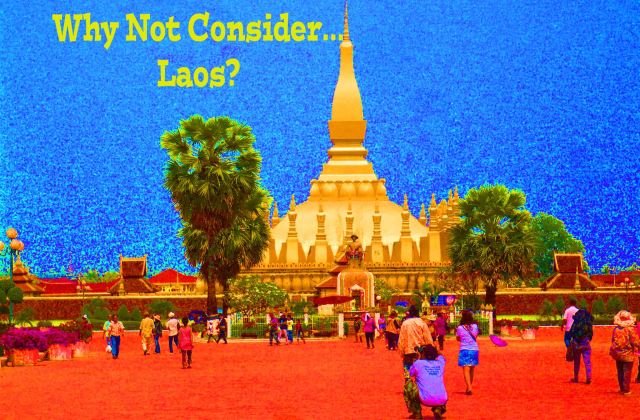 South-East Asia is a non-stop smorgasbord of interesting, fun, exciting places for the traveller. Thailand is the prime hub I guess in many ways, with beaches, trekking, the nights and lights of Bangkok and more, Malaysia offers all that but in smaller doses with a fair dose of colonial history and architecture if that’s your bag, Bali offers plenty as well whilst also being a major party spot, Cambodia draws the visitor in with incredible temples, and Vietnam is opening up and becoming hugely popular from north to south, Halong Bay to the Mekong Delta.

One country, which does get quite a few tourists – 2009, 10 years ago now, saw the number at around 2 million up from 5000 in 1991, is still not nearly as frequented as any of its neighbours. Which for me alone is a good reason to consider it.

Whilst Thailand and Vietnam have huge populations over 50 million, Laos, itself a fairly big country, has a population of around 7 million. It has space, history, temples, rivers, and a life a little more laid back compared to its more visited neighbours.

Luang Prabang is a wonderful town. It’s very relaxed, quiet even. Along the Pak Long River, boats will take you further up stream to temples in the rocks, and villages purporting to be ‘traditional’ (although, like Thailand you will still be able to get a soft drink!). It’s a very worthwhile experience.

Honestly, you could spend a few weeks in Luang Prabang if you are looking for a place to escape it all. There are an awful lot of restaurants. Many with very typical fare that you get in the region which is aimed at foreigners – friend rice, Chinese staples, green Thai curries. Have dinner overlooking the Mekong. Or try a Laos BBQ – they give you this little BBQ, a sort of cone, and it sits in the middle of your table. You order meat (thinly cut) as you desire and cook it yourself. It also comes with a choice of sauces. It’s pretty special.

Climb the hill to the temple that sits above and if it’s not too hazy, take in the surrounds, or take a half-day trip to the Kuang Si Waterfalls. There’s a deep pool below and on a hot day there is no better place for a dip.

Although it is not ‘known’ as a major destination in SE Asia, Luang Prabang is set up for foreigner travellers. Which is good and bad. This means there are loads of businesses set up for tourism, chiefly restaurants, bars, hotels, guesthouses and massage places (as far as I know, the ones in the main area are legit). It does take away the feeling of authenticity a little. It means a change of life for many of the locals. But then again it does bring in money. Always a catch-22.

All in all, Luang Prabang is the main tourist spot in the country. However, there is more to Laos. Coming in from Thailand, from the Chiang Rai area there is the chance to get to the capital Vientiane by river, which is always a great option. Take a slow boat and discover a little of river life! (I have not done this by the way) 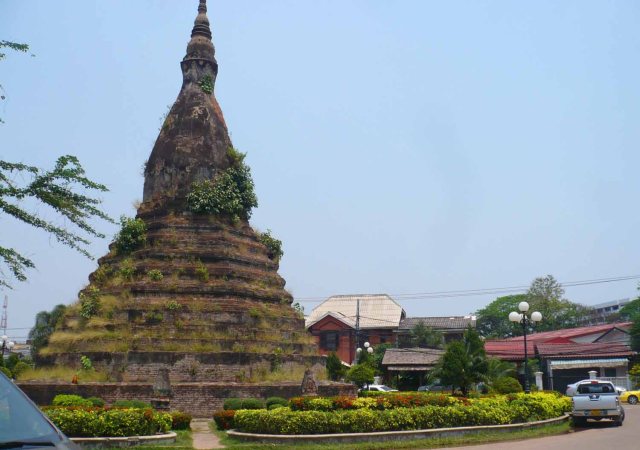 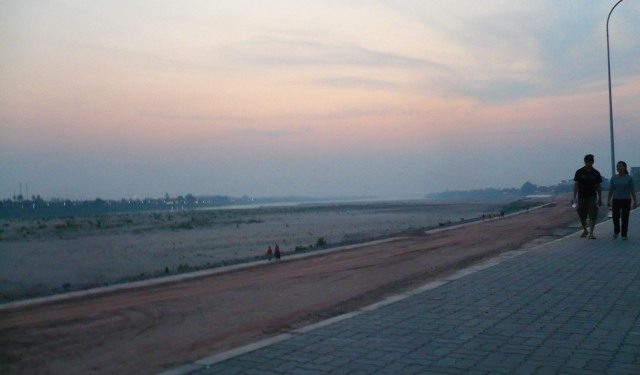 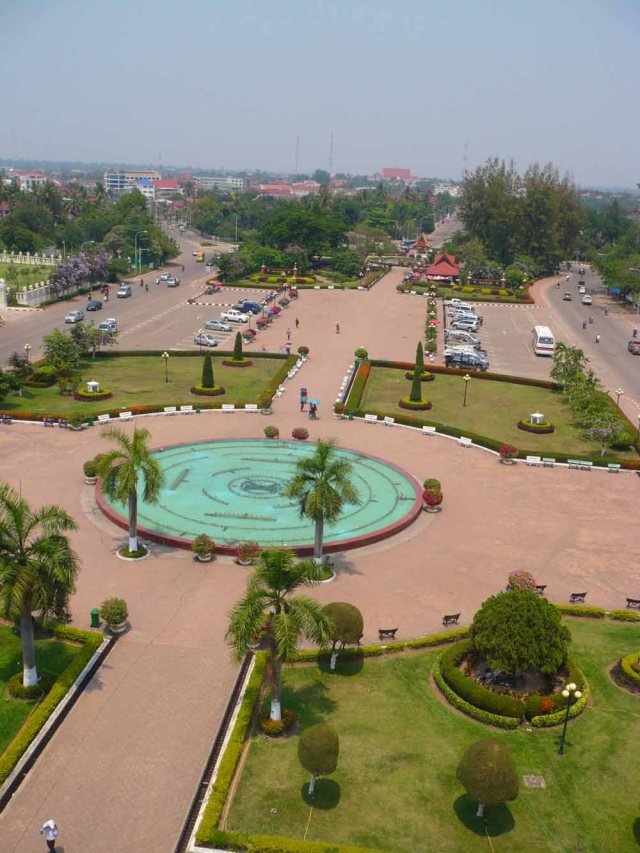 The capital is certainly the biggest city/town in Laos, right on the mighty Mekong River, which forms the border between Laos and Thailand. There are plenty of places to stay, a bit of nightlife (some of it on the seedy side it must be said) a number of temples including the Pha That Luang Vientiane – a Buddhist temple (as almost all of them are) with a gold stupa inside 44 metres high.

North of Luang Prabang is hill country, there is a flying-fox “gibbon” experience that many go for, cooler weather, and you’re a bit more ‘away from it all’. Then you have Phonsovan and the Plain of Jars. 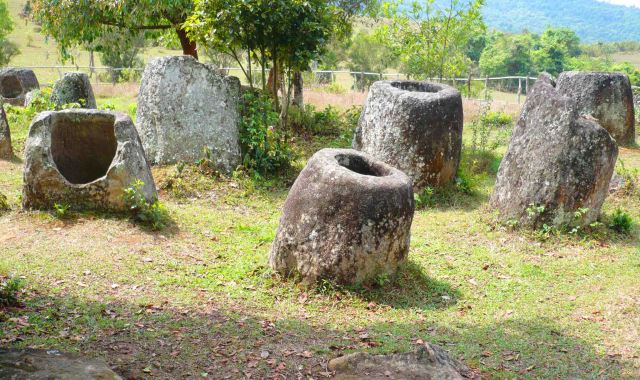 Phonsovan and the area was heavily mined during the 1960s and 1970s. Whilst war in Vietnam raged on, Laos was a communist state and was bombed too. Not only mines but the countryside was once littered with UXO – Unexploded Ordances. Today, thanks to the work of many organisations, the number is far fewer than what it was. However they still exist.

Phonsovan is head quarters for mine/bomb removal, there is a centre there where you can learn a about the history of the area. And from Phonsovan you can take a tour out to the ‘Plain of Jars’. This contains several sites, not that close together, where these giant ceramic ‘jars’ can be found. Although many will tell you that it is not known what they were used for, I think that is just to add mystery and therefore interest in the jars, which are spooky enough and interesting enough anyways IMO. From everything I heard and learnt, it seems hard to doubt that these jars were in fact coffins. The jars are dates from 500BC to 500AD. So, they are pretty old!

On the negative side, well, transport still isn’t greatly developed in Laos and the roads aren’t the best. You can get around in sort of mini-vans or boats. Vang Vieng is a tourist mecca but most of it is run by foreigners and it’s really just a party place. This where the tubing happens. Drugs and prostitution are a problem also anywhere travellers frequent. I guess it’s not as bad as Thailand, the police, I was told whilst there, are not so much interested in arresting people if you know, people have money.

But look, there’s no reason why these things will affect you unless you put yourself in it. And I’m not saying ‘drugs are bad’ – but I do know of a guy who overdosed and died many years now when visiting Laos and his friends were under house arrest for weeks. So you know, it’s not your country, don’t give the authorities a reason to have issue with you, don’t draw attention to yourself.

I loved Laos, and would happily go back there. I’d like to spend a bit of time slow travelling up the Mekong. Choose their winter time (Dec – Feb) for the cooler (but still not cold!) weather, even in April it was pushing 40 in Luang Prabang every day.

8 thoughts on “Why Not Consider… Laos?”