G’day all – today I am reviewing my experience snorkelling at Sea World that I had back mid-April, and including video of what I shot there in the man made “lagoon” that they have. It’s called the ‘Tropical Reef Snorkel’, and it is open to ages 8 years old and over.

An Experience to Recommend

The snorkelling experience at Sea World – on the Gold Coast – I think is something I can definitely recommend. It’s an easy snorkelling experience, and one that would suit various ages from child through to … older adult? LOL. But my point is, this is a short, fun, well supported chance to snorkel where you don’t have to head out on a boat.

Instead, there’s a man-made “lagoon” and you are allowed to snorkel in a bit under half of it, along with an array of fish, rays and sharks. Naturally, they are all pretty harmless – but it is a great little collection of marine life and it’s all in a small area. As I did, I would recommend heartily taking some sort of underwater ‘action’ camera. I used my Kaiser Baas, which basically is a cheaper version of the GoPro, and not as good. Whereas the snorkel trip I did out to Wave Break Island gave you the chance to hire a GoPro, this one did not. 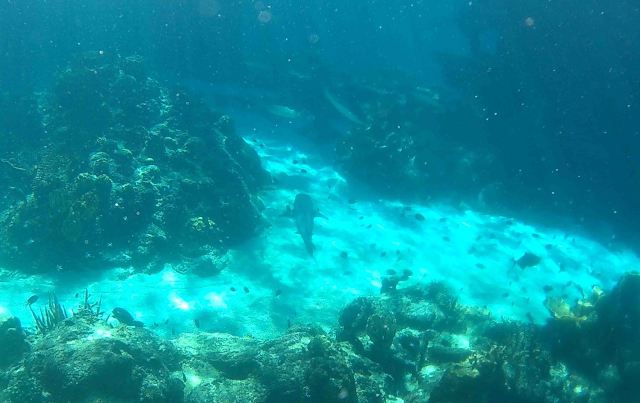 The cost of this program is $59.95 AUD, so a little over $45US. For that you get an hour – but that includes getting your gear, putting it on, and taking it off plus a little bit of a pep talk before you get in the water. As a result, you get around 20 minutes in the water. Would I have liked longer? Yes! But the convenience is the thing.

The tickets were bought at a booth in a nearby area, I think where they sell the tickets for all the different Sea World experiences – there are quite a few, including getting close with sharks and dolphins. That’s two different experiences there. You can also buy tickets through the Sea World website. That is on top of your entrance ticket.

So you’ll need to have a towel. I did not. Bathers yes, towel no. What I did was buy a $14AUD Sea World towel from the booth where I bought the tickets. Wet suits are provided, and I think they are compulsory. The water is supposed to be 22 – 25 degrees, which is pretty warm, but wet suits aren’t a bad idea and I don’t think you get a choice.

They run the program a few times a day so someone has probably already used your wetsuit – they are already wet when you put them on. And of course, you get your snorkel too. As I said, I think an underwater camera is a must here. And the flippers, that’s also useful I guess. I mean, it makes you move faster through the water although frankly, I sometimes find it easier without.

Well, you meet at a prearranged spot upstairs and get taken into the change rooms and given a wetsuit. Then you are led out to the entry spot to the ‘lagoon’, a couple of gentle steps into the water and then it’s straight down. Put your flippers on there. They take a photo before you go into the water, which is nice I guess and included in the cost, however really you’d want one under the water, wouldn’t you?

Then you get around 20 – 25 minutes of time in the water. You can swim around and see so many fish, rays and black tip and white tip reef sharks. There is a lot of marine life in there, and it was a lot more varied than I found near Wave Rock Island. Don’t touch the animals. Obviously. And watch out because to one side of you is a big glass window with humans glaring at you, and, well, mostly the marine life I guess.

Then it’s out and back to change into your civvies. In all it takes about an hour, with a little over a third of that actually in the water. Even though the ‘lagoon’ isn’t that big, it’s still not enough time I’d say but they take 12 people a go and they try to offer to as many people as possible. Really good as an introduction to snorkelling I would say. There was a couple of dive instructors around, one in the pool, in case of any emergency.

The Tale of My Camera

Although I had a really good time and was happy with my pics and video, it nearly was a bit of a disaster. About half an hour before I was due to get in the water, I checked my camera. I opened the protective case of the camera and I discover quite a bit of water had got in. The shot was hazy and the recording would last a few seconds before freezing. ARGH!

I took out the battery and let it sit in the sun, and I also blew into the camera, as strange as that sounds (little drops of water came out the sides!). Remarkably, it started working normally as I sat in the water fixing my flippers to my feet. I wasn’t sure it had worked though until I got back to my hotel and I could check what had been recorded on the memory card. Boy – I was relieved!

All in all, it’s a basic, easy experience, but I think rewarding and worthwhile, and if you’ve never snorkelled before, I can’t think of a better introduction. Thanks for tuning in today – May the Journey Never End!

One thought on “Tropical Reef Snorkelling at Sea World”