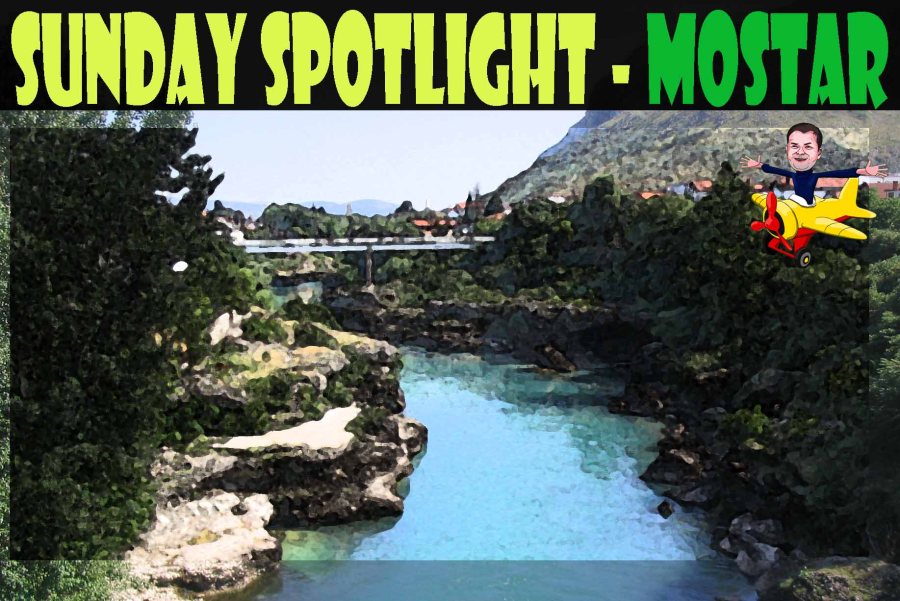 Howdy all and hopefully it’s a happy Sunday wherever you may be in the world! Today it’s another ‘Sunday Spotlight’ and today I’m shining the ol’ spotlight on the city of Mostar, Bosnia Hercegovina. Mostar is in the south of the country, a few hours by bus from Sarajevo, the capital. You can also reach it by direct bus from parts of Croatia, cities such as Dubrovnik and Split. So, how is it as a destination?

Well, my visit was a long time ago now, back in 2004. It was just coming up to Summer and I might start by suggesting that Summer is not the ideal time to visit as it was over 40 degrees every single day I was there which was quite brutal. It’s a town that in 2004 was looking for visitors I would say. There had been a lot of reconstruction work in progress in the Old Town, and there were loads of restaurants and tourist shops selling their wares. And the highlight of Mostar, the Stari Most or, translated, the Old Bridge had just been rebuilt and was covered in plastic as it awaited its unveiling to kick off the tourist season in Mostar.

Mostar itself dates back it seems until around 1452, so it’s a reasonably old town, and today is one of the six biggest towns/cities in Bosnia Hercegovina. It’s a town that was somewhat divided, having Catholic and predominantly Islamic histories, being an important town during the Ottoman rule of the greater region from the late 16th century onwards. The bridge was originally a wooden bridge, but was rebuilt in stone in 1566, and it became the symbol of the town. In fact, the name ‘Mostar’ actually means ‘bridge keepers’ (if you can believe the interweb) so it’s logical that there must be a bridge of some importance in the town.

That bridge crosses the beautiful Neretva River. It really does look beautiful from one of the bridges. It’s a really nice little town with a very sad recent past – there are very similar numbers of Croats and Bosniaks in Mostar, which at times were at loggerheads during the Bosnian War of the 1990s. However, there was a small Serb minority which no longer exists as they were driven out after the war.

So there is a clash of religions still today. The Croats generally identify and as Catholic, whereas Islam is the chief religion to Bosniaks. In 2004 the war was still in everyone’s minds, I hope that that’s a little different today, because I could see the town had the  potential to be a charming little place to visit.

It must be said that clearly things weren’t 100% amicable in 2004. Remnants of the war were all around, burnt-out buildings and others riddled with bullet holes hadn’t had the chance to either be rebuilt or even torn down in 2004. Especially on one side of the river, which on the hill above stood a large cross, and I believe that was the Croat side of Mostar. This side seemed poorer.

The Old Town was bereft of people when I was there, as I said they were talking about a big reopening and there were loads of restaurants and places to buy souvenirs just waiting for the tourists to arrive here at this well rebuilt part of town. I was disappointed not to be able to see or cross the Stari Most, but such is life. There are churches and mosques in town which are also probably worth exploring today.

I spent more time doing a couple of day trips when I was there. Firstly to Medjugorje, a completely Croat town in Hercegovina, famous because back in the 1980s a group of teenagers claimed they saw the Virgin Mary on a hill just outside town. Now people visit the town as a pilgrimage to see where it ‘happened’ and others produce tacky souvenirs for the visitors to buy. Some even feature pictures of the teenagers themselves.

Also the Blagaj Tekija is this monastery in the village of Blagaj, something I think I visited in an afternoon from Mostar. It’s a charming place, the monastery sits next to a body of water and a cliff, the water then goes under the rocky hill. The villages around it still seemed to be suffering badly from the events of the war in 2004. Hopefully by now life has somewhat returned to normal for them.

I think today there’s more open to see and do in Mostar. I wouldn’t mind the chance to return some day. I stayed in a homestay also when I was there, u think I would pretty much have to do hotel or guesthouse now, but back in 2004 lots of places had homestays available, usually someone would approach the bus and see if anyone needed a bed for the night, which is what I did\. Which was all very cool!

Thanks for reading today, hopefully Mostar has piqued an interest in this part of the world! Take care wherever you may be, and May the Journey Never End!