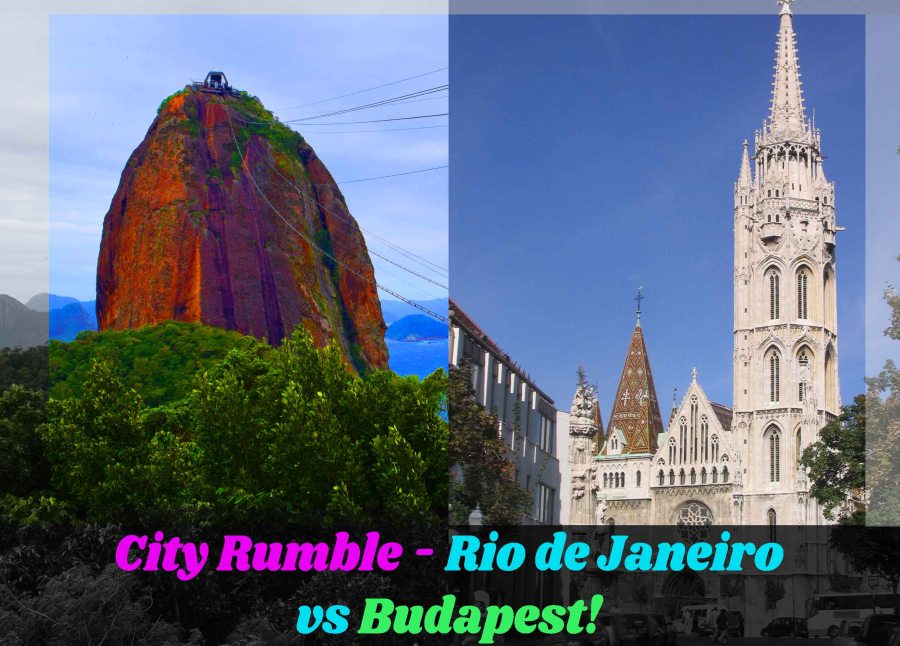 Oh oh when my baby…. When my baby smiles at me I go to Buda… Budapest…

Whoops! Got a bit carried away there. There are songs about Rio. There’s ‘I Go to Rio’, by Peter Allan, and there’s ‘The Girl from Ipanema’ by, well, it’s been covered by a lot of people. I can’t think of any songs about Budapest. But that doesn’t mean it’s not a great city – it certainly is! One I highly recommend to those wanting to see what a bit of Eastern Europe is like, and an option instead of Prague if the numbers of people there put you off. Although I might argue that it is a better city anyways, with more to see and do than its Czech neighbour.

Two vastly different cities here, again, so it’s going to be an interesting contest between Rio and Budapest. Before we get into the nitty-gritty though, it’s become customary for us to check out just how these two fine cities made it the second round.

It’s fair to say they fought off opposition from cities that are more similar than who they face today, and cities which are in the same continent/region to the city in question. Rio de Janeiro of Vrazil fought valiantly to vanquish Buenos Aires, in Argentina. Check out – City Rumble – Buenos Aires versus Rio De Janeiro.

Budapest did battle with a city with a name that apparently is pretty similar, and that was the Romanian capital of Bucharest. So similar apparently that Michael Jackson when in Bucharest stood out on the balcony of the Palace of the People and looked down on a crowd of thousands and yelled ‘Hello Budapest’. Well, that’s the story I was told when I did a tour of the Palace of the People. This was one of the earliest City Rumbles I did, back in March 2017. Check out City Rumble – Budapest Versus Bucharest.

Both cities today, Budapest and Rio, are very worthy of making it to the second round. Their contrasts are stark and clear – Rio is a city that oozes music and rhythm, intertwined between rocky mountains boasting some of the world’s best beaches. It is full of life and colour, with history to boot. It boasts a huge population of 6.3 million in the city and over 13 million in the metropolitan area.

Comparatively, Budapest seems somewhat austere. It’s a grand city sitting on the Danube, filled with history dating back a thousand years. Having said that, not as one entity – two cities merged in 1873 – Buda and Pest to create the city that we know today. 1.7 million live in the city and 3.3 million in the great metropolitan area. So comparatively small.

Budapest, and Hungary, are somewhat conservative places I guess. Certainly Hungary is one of the less liberal European cities. This compares to Rio which is one of the more liberal places in the world. You know what I’m saying here! Which certainly is a huge tick for Rio. But there’s more to a city that just its ideals I guess.

Budapest is a grand place to explore. You can find a labyrinth of tunnels open to the public under a hill on one side of the river. It’s the thing I remember most about Budapest. This part of town is known as the ‘castle district’, and from here you get a great view across to the other side of the Danube and some of Budapest’s grandest buildings including the Hungarian Parliament Building, which is a fine building indeed. Stand at the Fishermen’s Bastion and look across to some brilliant city views.

Budapest also boasts a number of impressive churches, as do most European cities. You’ll find gothic is the style that seems to predominate. For example, check out the impressive Matthias Church in the Square of the Holy Trinity.

Budapest also has a dark past in many ways. Learn about occupations and invasions and life in communist Hungary at the ‘Terror Haus’ Museum. It’s always a good idea to have some idea of the history of the place you’re in. Many still remember when Soviet tanks rolled into back in the 1960s. There is also a statue park to check out if you’re into your communist statues!

There are some nice parks as well and Budapest is known for its thermal baths, often regarded as a highlight of visiting the Hungarian capital. At night you can find opera tickets for a decent price – and top notch too of course. Budapest does not have the high prices of some of its neighbours.

Turning our gaze towards Rio de Janeiro now. That’s a journey of just under 10,000 kilometres – 9,981km according to Google Maps. Rio is such a different city, not just to Budapest or European cities, but to any city really. I can’t say I have ever been to a city similar to Rio. You could say the rock mountains that punctuate the Rio vistas are similar to those near Guilin, China, but then Guilin is a town, and there are no beaches, it just doesn’t compare. And there are no cable cars between the mountains either.

One of the best things I found to do in Rio is to take the Sugarloaf mountain gondola ride the views of Rio and the bay are spectacular. And it goes from one peak to the next to the next. So an impressive engineering feat too.

Speaking of engineering feats, there’s a sort of funicular railway up the mountain to get to Rio’s most recognisable landmark – the statue of Christ the Redeemer. More phenomenal views await you at the top there too. The beaches of Copacabana and Ipanema and world famous as well, and it’s a constant party atmosphere at both with people playing volleyball, roller blading, sunbaking and just enjoying the atmosphere.

Rio has plenty of history too, and Catete Palace, the old President’s Palace, is a stunning building which you shouldn’t miss. Then you have the Selaron Steps, aqueducts, markets with music and one of the strangest but impressive modern churches you can find. The Metropolitan Cathedral is stunning, and very tall with amazing use of stained-glass windows.

Let’s quickly look at a couple of things – firstly costs. Budapest is going to provide slightly better value for money than Rio de Janeiro I guess. Hard to say. But Budapest is not an expensive city, and although there are more expensive places than Rio, it’s not the cheapest by any means.

I loved Rio and had no safety concerns whilst I was there, but if we go on reputation alone, Rio is a much more dangerous city, especially in terms of muggings and theft, when compared to Budapest. You will need to be on your guard in Rio for sure. Having said that I had my DSLR when I was out and about, and I was okay. I didn’t want to miss the chance to take good photos of Rio! I did, however, keep it in my backpack when not in use rather than keeping it around my neck.

All in all, Rio is a vibrant and unique place. There is no city on Earth like Rio, except for Rio. And that’s why it wins today. Budapest is a great city and I hope to return one day and get to know it better, but Europe is full of beautiful, historic gothic cities. The views and vibes of Rio de Janeiro are hard to match no matter where in the world you are!

Thanks for reading today! Take care – and May the Journey Never End!