Today I’m reviewing my recent journeys on Turkish Airlines and visiting the new airport in Istanbul.

Howdy all again, it’s time to take to the skies again, this time with Turkish Airlines who I have flown a few times now and give an honest appraisal of how they were and how they compare to previous experiences which date back to 2011.

As with a lot of flights to Europe from Central Asia, especially if you flying a European Airline, flying out of Ashgabat is not going to be at a sensible time unfortunately. No sir. However, I booked online and was delighted to find an 830am flight from Ashgabat to Istanbul on the Turkish Airlines website. So I booked it for around $340AUD I think it was, one-way economy. My plans from there on in weren’t set in stone, but I ended up buying a flight from Istanbul to Tel Aviv. Initially this was a frequent flyer flight, and was with Royal Jordanian.

This was through Amman, and when they altered the time of the second flight forward (Amman to Tel Aviv) I was left with a 20 minute layover in Amman, which was never going to work. I’d booked it through Qantas, and they agreed, but still penalised me points for cancelling which I thought was a bit stiff, sadly I failed to follow up.

Then Turkish Airlines cancelled the flight altogether, and I was put on the 410am flight (which I think is daily) on the same day. I had seen that flight and needless to say, was keen to avoid it, but what choice did I have, right? I understand they cancel flights because of lack of demand, but this has happened to me (on different airlines) on at least three occasions in the last 15 months which is pretty annoying.

So anyway. I booked a new flight direct Istanbul to Tel Aviv which I think was a similar price to Ashgabat-Istanbul. It was made more annoying by the fact that if I’d just been sensible and booked Ashgabat to Tel Aviv through Istanbul I would have saved about $200AUD. But sometimes you have to let go of money. It disappears so much easier than it appears.

So anyways, whew, that was booked. I also booked onwards Tel Aviv to Minsk with Turkish Airlines, five days later. So all in all four flights with Turkish Airlines in the middle of my trip. The journeys started one November morning at around 1230am, when after five or six hours of trying to sleep but mostly not, I got up, showered and was picked up by my driver in Ashgabat from my hotel to go to the airport.

Heading to the Glittering Ashgabat Airport 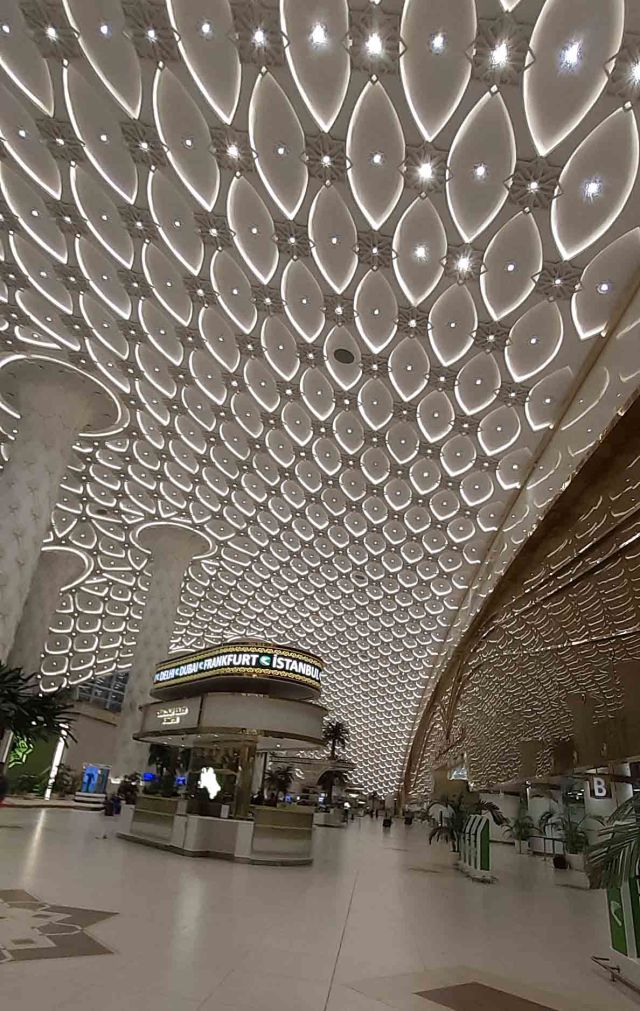 I had hoped it was a two-hour window, but I was told I definitely needed to be there three hours before my flight. C’est La Vie. I was also told it took fifteen minutes to drive to the airport, it was no more than five at that time of night.

Ashgabat Airport is one place I should have taken more photos. The exterior is shaped like a white eagle, you enter sort of through the ‘eagle’s head’. Like the city of Ashgabat, it is all white, possibly marble, it was built to open a few years ago now, I think, when Ashgabat hosted the Asian Games. The airport was both magnificent and eerie, as are most things Ashgabat. I wish I’d bothered taking more photos as I only got a couple of inside snaps.

The ‘three hours early’ thing was a complete furphy. I was there just before 1am and at my gate by around 115am. The check-in process was so quick and easy, and I don’t think there were any flights leaving until mine bar one maybe, so it was very quiet. My two tickets were, as I said, separate, but they were able to combine them thankfully so I didn’t need to collect bags and check in again at Istanbul.

I spent a bit of time at a café and worked on my diary. There was one open, with a pretty limited menu. It was expensive for Turkmenistan, but not for your standard airport café prices I guess. There was gate after gate after gate but only a handful flights. Travelators went on and on and on… 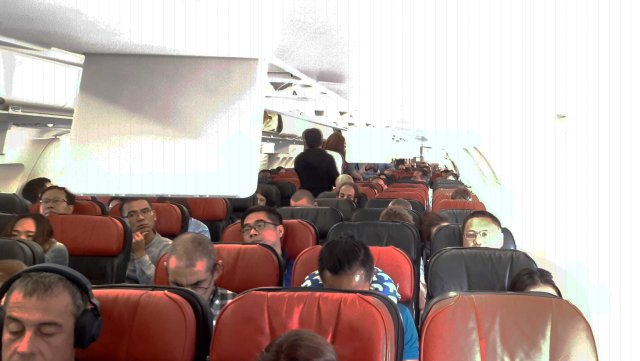 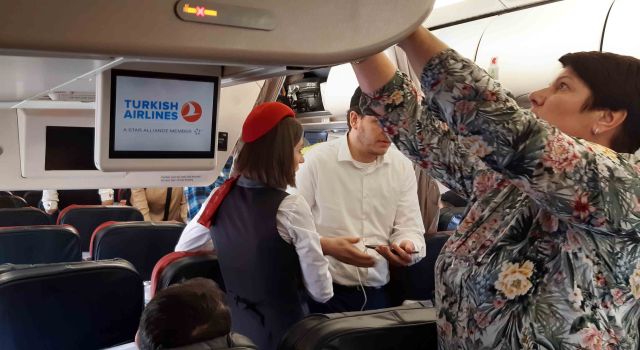 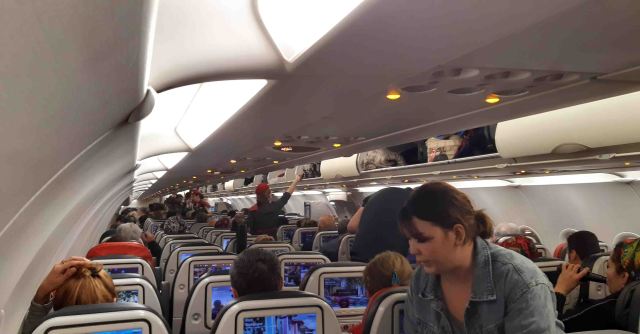 And finally it was time for boarding, and we were on board the Airbus A321-200, with a 3 – 3 configuration, which I think was pretty much the configuration I had on all three flights. Well, it was actually a pretty busy flight.

So in writing this post I have just reviewed my diary and I described this flight as the worst of the trip (thus far) and I think it stayed the case. It wasn’t until 15 minutes before the scheduled departure time that they began boarding. They asked for Business Class passengers to board first but everybody just went for it and they didn’t stop them. I find it frustrating when there is supposed to be a boarding procedure and they don’t enforce it. Because I was one of the last to board, but I was at the back of the plane which meant that I had to work my way from the front past everyone to the back.

Turkish Airlines were regarded, in fact they won awards ten years ago now, as the best airline in Europe and one of the best in the world. Their biggest plus is that they have an incredibly wide network and a list of destinations which encompasses 123 different countries. Which includes Turkmenistan but not Australia. So they are a handy and not overly expensive and they certainly ack the seats in – this was the least legroom I had in 2019. I had an emergency row seat prebooked on the second flight from Istanbul, which was obviously better.

I was also unimpressed with the food, or the fact that people leant their seats back for take off and the cabin crew, who I noted did not ‘crack a smile’ for the whole flight, didn’t seem to care. There were no announcements either from the captain, no announcement on flight time or conditions, and there was a bit of turbulence. So I did not sleep at all.

But nevertheless we did make it safely to Istanbul. The new airport was a bit chaotic. It certainly was very busy. I guess Istanbul is a spot for connections from Oceania/Asia to Europe. And the old airport I remember as being crazy. What struck me about Istanbul Airport was that it seemed to be kept at around 27 degrees Celsius, which was way too hot for comfort. Actually, the flight was too warm too, especially as it was an overnight flight.

I did manage to find a seat and grabbed a couple of hours sleep at Istanbul Airport. There are areas with recliners and a few other places you can grab a kip. I had Carl’s Jnr for breakfast which was okay, rather expensive but then, that’s airports for you, right? There were plenty of duty free shops, and a number of selfie opportunities, including one pictured below in this sort of flashing triangle thing. It’s a long and thin terminal and both times I had to walk a long way to connect. Food outlets are often hidden away in spaces above the main concourse.

There were expected screenings and bag checks for the flight to Tel Aviv – let me tell you that LEAVING Israel seemed a lot more work than entering, which was a bit on the strange side. A similar plane to Israel, a better seat, but the guy next to me took it initially although I had paid extra for it and I had to ask him to move, which is not really pleasant.

The flight to Tel Aviv was smoother, and I wrote little about it in the diary so I presume that it was mostly uneventful. Flying out of Istanbul was quite beautiful, the morning sun and the coastline, not too many clouds as to prevent the view. But arriving in the Middle East there was so much dust, everywhere! I was glad that when I was in Israel it was clearer than it appeared from the air because wow! Almost like a small dust storm. For a look at the flight experience on this leg, I did take some footage. A little glitch effects the final shot, but it gives you a decent idea of what I saw through my little window.

And I was there around lunch time, but I had a slight cold in Ashgabat which was much heavier by the time I landed in Israel. I had planned to get straight into sightseeing but instead I took a minibus shuttle to my hotel and then spent most of the rest of the day in bed.

I also took Turkish Airlines out from Tel Aviv/Jerusalem, layovered again in Istanbul Airport, and then onto Minsk, Belarus. All in all they were solid, none of the last three had the issues of the first leg (Ashgabat to Istanbul), but then again they were really tight seats and it was pretty basic for full-fare travel. Attendants were generally in better spirits than the Ashgabat flight on the others.

Turkish Airlines are certainly a well-priced airline with a large choice in destinations, and those are two big pluses for them. They are reliable, but they are not an airline of frills, not one that makes you feel a bit special. At least, that’s the impression I got on the flights I took last year. They are one of the most convenient airlines though in this part of the world, and I wouldn’t have any qualms in flying them again.